Home » Americas » In Oakland, Breaking Down Barriers With Cookies 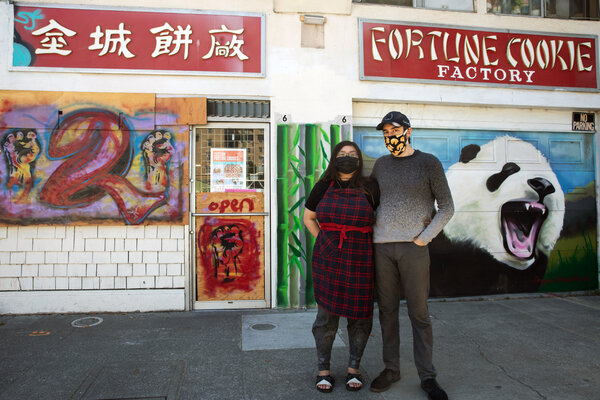 Today, we have another dispatch from the University of California, Berkeley Graduate School of Journalism, written by Shuang Li.

OAKLAND — When Black Lives Matter protests erupted in downtown Oakland, Alicia Wong and her husband, Alex Issvoran, knew what they could do to support the protesters — make fortune cookies.

Their company, the Fortune Cookie Factory, is one of the oldest family-run businesses in Oakland’s Chinatown. They created new recipes and stenciled “BLM” in gold letters on each one. Next came new fortunes. Instead of Chinese proverbs, they searched classic texts and films of civil rights leaders. From Martin Luther King Jr. came: “Today we know with certainty that segregation is dead. The only question remaining is how costly will be the funeral.”

Ms. Wong, born in China but raised in the U.S., and Mr. Issvoran joined the protests and gave cookies away to marchers. Others they sold, donating half the proceeds to the NAACP and the Innocence Project, which works to free the wrongfully convicted. At the entrance to their business, they had a new mural painted beside one of a roaring panda. It depicts raised fists separated by a fortune cookie.

Their burst of activism is emblematic of new efforts to break down barriers that have long divided Oakland’s Black and Asian-American residents. In interviews, local leaders described how the combination of the pandemic and the Black Lives Matter movement is changing relations between the two groups.

Particularly for younger Asian-American residents, the rise in anti-Asian sentiment, fueled by President Trump’s inaccurate description of the coronavirus as the “Chinese virus,” has shattered the protective bubble of Oakland’s Chinatown. According to the Stop AAPI Hate reporting center, an initiative begun by Asian-American and Pacific Islander civil rights groups in March, more than 2,600 incidents of violence, bullying and other forms of anti-Asian discrimination have occurred across the U.S. since the start of the pandemic.

Kim Tran, an Oakland consultant who is writing a book on cross-racial solidarity, said the outpouring of hatred has brought home the realization “that we are people of color, and it is a vital interest to align with other communities of color.”

At the same time, the change has exposed new generational fault lines. When Ms. Wong and her husband started making the new fortune cookies, for example, her mother worried that such a public display might generate a backlash. “They don’t like bringing attention to themselves,” Ms. Wong, 25, said.

While Ms. Wong’s mother now supports her daughter’s activism, many older Asian-Americans are more tentative. It was only 10 years ago that a spate of attacks by Black teenagers on elderly Chinese residents in the Bay Area led to protest marches. Many get their news from WeChat, a popular Chinese app that is heavily censored and tends to focus more on scattered acts of violence by protesters rather than their calls for social justice. Meanwhile, The World Journal, a major Chinese-language newspaper in the United States, reported that scores of shops in Oakland’s Chinatown were vandalized during protests over George Floyd’s death.

Finnie Phung runs the Green Fish Seafood Market, just blocks from the Fortune Cookie Factory. When a drive-by car rally for Black Lives Matter passed her store this summer, Mrs. Phung stood on the sidewalk and cheered. Her employees, many of them older or recent immigrants, did not understand what was happening, or her enthusiastic support. “They think, ‘They’re Black, they’re Americans, they speak English. What’s the difference?’” Mrs. Phung explained.

She added: “They don’t understand the skin color is what causes the difference.”

For Ener Chiu, associate director of real estate at the Oakland-based East Bay Asian Local Development Corporation, the epiphany came when he watched the video of George Floyd being suffocated while an Asian-American police officer stood by. “I used to shave my head like that,” he said, referring to the Asian-American officer. “I looked at the image and thought that was me. I thought, ‘Oh my God, we’re just sitting here doing nothing.’” At a time when Asian-Americans are also being subjected to hatred, he added, “we need to be more vocal and more together with the African-American struggle.”

Throughout Oakland, Asian-American and Black leaders are reaching across generational and racial divides in new ways. In the wake of California’s pandemic shutdown, the African American, Chinatown, Vietnamese and Latino Chambers of Commerce in Oakland submitted their first joint proposal to the city to coordinate assistance across neighborhood lines as businesses try to survive and rebuild. In June, the Oakland City Council approved $500,000 to fund the effort.

“I’d always been saying there will be a time where we need to come together to advocate for each other, to support each other,” said Shonda Scott, chairwoman of the Oakland African American Chamber of Commerce. “Who knew it’d be Covid-19 and some pandemic that we would be fighting against? And the other pandemic is racism.”

Jennifer K. Tran, executive director of the Oakland Vietnamese Chamber of Commerce, has also noticed how the pandemic is prompting changes in the relationship between Asian and Black residents. “We need to rise above this Asians-against-Black, Black-against-Asians, this interracial tension, but rather look at how the systems have been designed for certain people to succeed and other people to flounder,” she said. “Second-generation immigrants are beginning to see that.”

The inspiration for the free lunches, Mr. Wong said, came from the Black Panthers, who ran a free breakfast program that served tens of thousands of mostly Black children in the 1970s. Tarika Lewis, a veteran of the Panthers’ food program and a local Black activist, joined Mr. Wong and Ms. Banh at their first free food pickup in Chinatown, and continues to work with them.

Ms. Lewis, who is a graphic artist, and Mr. Wong together designed the T-shirt that some community leaders and protesters have been spotted wearing; against a black background, three words in yellow lettering circle a panther’s face: “Asian x Black x Unity.”

“In Oakland,” Mr. Wong said, “there’s a very strong sense of pride about what the Panthers accomplished and how that carried over into different communities. It’s both a nod to the past and an aspirational look towards our future together as Oakland.”

This article was written with financial support from the Asian American Journalists Association.

Bloomberg for President? ‘No Way,’ His Successor Says

Spacey sex assault case in doubt after death of accuser