Home » Americas » In the End, Amazon Didn’t Win Its Own Subsidy Game 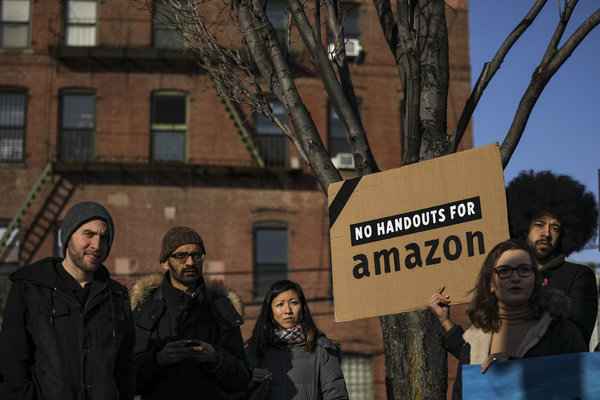 In exchange for tens of thousands of tech jobs, cities promised Amazon the moon — and an airport lounge, and naming rights, and a chance to pocket its own employees’ taxes. States offered incentive packages worth $7 billion, $8.5 billion, $9.7 billion, any of which would have set records.

But now Amazon will walk away from the largest and most public subsidy auction in history with relatively few giveaways to show for it.

Those are modest sums in the context of what had become a spectacular subsidy arms race that many feared would encourage more corporate fishing for dollars in the future. And neither Virginia nor Tennessee offered outlandish side perks (Nashville’s mayor called its offer “a relatively minor investment for the city”).

Instead, this surprise in the Amazon sweepstakes hands critics of such deals their best-case outcome: Taxpayers won’t be on the hook for billions of dollars in subsidies (despite the efforts of many politicians). And the corporate incentive game, normally played by public officials and companies in private, has gotten a nasty and very public airing. With a bitter ending to boot.

“Suddenly the green curtain was pulled back,” said Greg LeRoy, executive director of Good Jobs First, which has been lobbying against public subsidies for years. “People are aghast at what they saw, and rightfully so.

“It’s absolutely a godsend to those of us who have been trying to reform economic development.”

Combine the Amazon news with growing criticism of Wisconsin’s $4 billion incentive deal with the electronics maker Foxconn, and this begins to look like a possible turning point in the debate over tax incentives.

Some analysts blamed the Foxconn deal for the re-election defeat last fall of the state’s governor, Scott Walker. And last month, Foxconn suggested that it might not put promised manufacturing jobs in Wisconsin after all, only to change its plans again after President Trump intervened. The back-and-forth bolstered the criticism that companies may not hold up their end of the deal even after soliciting costly tax breaks.

Economists have long warned against the financial mirage of tax incentives for corporations. Now Amazon’s cautionary tale has made two things clearer to communities that might think about offering them. At least some voters will chafe at these deals. And companies don’t really make location decisions based on subsidies anyway.

In New York, public polling as recently as last week showed that a majority of New Yorkers supported the state’s deal with Amazon. But Amazon’s opponents among community groups, unions and public officials were fierce, and they held the power to stymie the deal.

In the short time since Amazon first announced its search for a new headquarters in 2017, the political climate in a liberal city like New York has also turned decidedly against big corporations (Representative Alexandria Ocasio-Cortez, whose district includes part of Queens, hailed the defeat of “Amazon’s corporate greed, its worker exploitation, and the power of the richest man in the world”).

What is perhaps most revealing, however, lies in the package Amazon will take from Virginia. Company officials said many times over the past year that subsidies weren’t the primary driver of its decision, although the premise of the public auction seemed to be that few would believe them. In fact, Amazon rejected the biggest offers on the table. It didn’t take the $7 billion, or the $8.5 billion, or the $9.7 billion.

Amazon chose Virginia, even when Maryland offered it access to the same labor market for 10 times as much money. The other differences between the two bids — Maryland offered a far less desirable site — are precisely the kinds of details that matter more. Virginia’s offer was relatively modest and straightforward, with subsidies for each high-paying job created in the coming years, and a grant from the city of Arlington tied to growth in local hotel tax revenue.

Virginia also pledged to invest about $200 million in improving infrastructure around Amazon’s campus, but that’s money that will directly benefit local residents as much as Amazon’s employees.

That package still angers some Virginia residents who believe that one of the world’s richest companies doesn’t need any incentives at all. But it’s a comfort to critics that the windfall is so far from their worst Amazon fears. If Amazon’s goal was to get the locations many people expected it to choose anyway to pay as much as possible, that is not how the story ended.

“They did walk away with a ton of data on lots of different cities, but in terms of the actual incentive dollars for HQ2, it’s not that much,” said Nathan Jensen, a professor at the University of Texas at Austin who studies incentive packages.

He suspects that some people will learn the opposite lesson — that New York should have just given Amazon what it wanted. A better takeaway, he said, is that huge subsidies aren’t necessary. And politicians should beware the consequences of negotiating them in private.