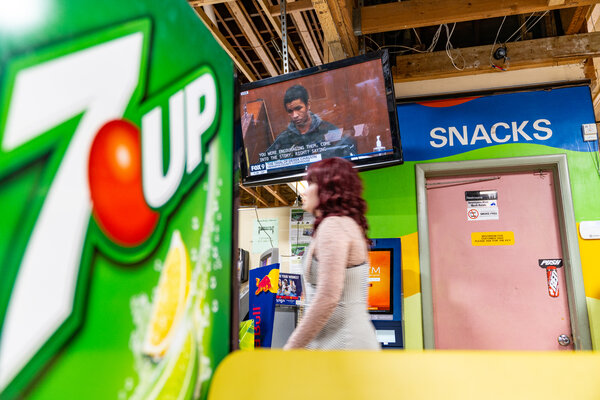 Customers inside Cup Foods put their shopping on pause on Wednesday morning to watch the Derek Chauvin trial on a television mounted above an A.T.M. The coverage again thrust the store into the spotlight as a former employee took the stand and previously unseen surveillance video from inside the store on the day George Floyd died was shown for the first time.

“This is the first time I’ve seen this footage — it was seized the morning after,” said Mike Abumayyaleh, who owns Cup Foods along with his brothers.

He said he and his employees were paying close attention to the trial. “We’d like to know the outcome,” he said, adding that the phone kept ringing because family and friends wanted to know if he was watching.

But he said he couldn’t say much because the Minnesota Bureau of Criminal Apprehension “asked us not to comment until after the trial is over.”

A refrigerator display at the front door has fresh vegetables, and wire shelves of snacks — many with 2/$1 stickers on them — line the aisles. Prepared coffee is on offer at a counter with low spinning stools that looks out at what is now known as George Floyd Square. To the right, in the street, is where Mr. Chauvin pinned Mr. Floyd under his knee. The store is a welcome escape from the weather and sometimes the action outside.

“We’ve been able to stay open because of the support of the community,” Mr. Abumayyaleh said between watching the footage and helping customers on the floor and behind the counter, sometimes speaking in Arabic or Spanish.

Across from the television, the deli counter with metal tables and swivel seats was quiet. The offerings include steak and eggs, omelets, gyros and wings. There are coolers with soft drinks and coconut water. A glassed-in corner close to the entrance has tobacco products.

Across the street, activists and volunteers again gathered for a morning meeting under the portico of the former Speedway gas station. It’s a daily routine to gather by a fire ring that is kept burning by volunteers. On Wednesday morning, more than a dozen people gathered to talk and listen. There are regulars and first-timers most mornings.

As the trial got underway Wednesday, the group scattered to find warmth at the nearby Baha’i temple, to run errands or to head to work.

Some said they would keep an eye on the trial on television or on their phone. Others said they hadn’t been tuning in — it was too draining. They would instead listen to recaps or highlights of the day later on.