SURFSIDE, Fla. — José L. Haar is still claustrophobic and suffers from chronic back pain, lingering effects from the hours he spent trapped under rubble between two dead brothers decades ago.

Hired to haul debris from a demolition project, Mr. Haar was one of three survivors of the 1997 collapse of the Biscayne Kennel Club, a dog track near Miami that caved while being wrecked by an unlicensed, uninsured and unregistered subcontractor.

“Everyone started throwing blame around: the owners, the city,” said Mr. Haar, who worked for a demolition company at the site. “It was a very difficult situation.”

The building collapse that killed two men is back in the news after it emerged that a city inspector who conducted multiple site visits during the doomed demolition was Ross Prieto, the chief building official in Surfside, Fla., who told residents of Champlain Towers South that their building appeared to be sound nearly three years before its deadly collapse last week.

His reassurances to condo owners in November 2018 that their building appeared to be “in very good shape,” despite a consulting engineer’s concerns, are among the many things investigators are likely to review as they try to determine what led up to the June 24 failure, which left at least 18 people dead and more than 140 people unaccounted for.

With few clues yet as to what caused the collapse, experts expect investigators to look at a wide range of potential factors, including delays in acting on the consultant’s recommendations for repairs; design or construction flaws; any issues with subsurface soils; and the possibility that some outside force — a vehicle that struck a post in the underground parking garage, for example — could have affected a key structural component of the building.

Cities across South Florida are reviewing older high-rises along the seashore — notorious for its weathering effect on buildings — to determine whether any of them face potentially serious structural issues.

The city of Doral, where Mr. Prieto has worked as a consulting building engineer since May, announced this week that Mr. Prieto was on leave for undisclosed reasons, and that it was reviewing the eight projects he had worked on in that city. Though there is no suggestion of problems with his work, a city spokesman said, the review was being undertaken out of “an abundance of caution.”

Mr. Prieto has not spoken publicly since the Champlain Towers South failure and did not respond to repeated requests for comment or a note left at his door.

Mr. Prieto, 54, who has a master’s degree in construction management, has more than 25 years of experience as a building and roofing inspector in at least six South Florida cities, including Miami, Miami Beach and Hialeah.

In 1997, he was the assistant director of building and zoning for Miami Shores, where the dog track was located. He had visited the site four times before the collapse, he said at the time, telling The Miami Herald that his job was to make sure that the work was done according to schedule, “not that workers were using proper procedures,” The Herald paraphrased him saying.

“Everything was going according to plan,” The Associated Press quoted Mr. Prieto saying. “From what I hear, this is just a construction accident. Accidents can happen,” he said.

For more than seven years, Mr. Prieto was the chief building official in Surfside. Emails released by the city show that Mr. Prieto had been made aware of a critical engineering report that warned in 2018 of damage to the concrete and steel reinforcements in the building that in some places could have threatened its structural integrity. When he attended a meeting of the condo association board that November, he reassured residents that the tower appeared to be in “good shape,” according to minutes of the meeting.

Later, when a resident of Champlain Towers South wrote to the city expressing concern that blasting and other activity during construction on a neighboring site raised “concerns regarding the structure of our building,” Mr. Prieto declined to send someone out to check, according to emails released by the city.

“There is nothing for me to check,” he replied in another email.

“The best course of action is to have someone monitor the fence, pool and adjacent areas for damage or hire a consultant to monitor these areas as they are the closest to the construction,” Mr. Prieto wrote. No engineering records have emerged publicly that would suggest a connection between the construction and damage at Champlain Towers.

On Thursday, Surfside officials hand-delivered letters to property owners notifying them that all ocean-front buildings more than 30 years old and taller than three stories should hire engineers to begin the 40-year building recertifications required by law — effectively starting the process 10 years early. The city is also asking property owners to hire registered geotechnical engineers to analyze foundations and subsurface soils.

Mr. Prieto spent five years as a building inspector at nearby Miami Beach, where city officials agreed to pay him $80,000 a year — more than 50 percent above the advertised salary — because he held a variety of important licenses, including one in roofing. City officials who hired him noted that a background check revealed financial problems, including a bankruptcy in 2002, his personnel file shows.

There is no indication that these issues were related to his competence as a building inspector, but they are generally considered potential red flags during pre-employment background checks.

At one point, Mr. Prieto owned his own development company and was involved in several real estate development ventures. Court records show that while employed at Miami Beach, in 2012, Mr. Prieto filed for bankruptcy again, this time telling the court he had accumulated $1.7 million in debt. He said he was losing one of the three properties he owned to foreclosure.

A few years into his tenure in Miami Beach, his bosses complained that he was frequently late, had missed more than 20 days of work one year, and often could not be located, according to emails in his personnel file. The record shows Mr. Prieto said he failed to call in sick on time because he had trouble with his sinuses. His bosses expressed concern that he frequently did not answer his phone when they were trying to reach him.

He was suspended after twice calling in sick several hours after his shift had already begun.

“I wasn’t made aware of a problem. On the contrary, there were people that would tell me how happy they were with Mr. Prieto,” Charles W. Burkett, the mayor of Surfside, said, stressing that he joined the city after Mr. Prieto was hired. “You can go back over the commission meetings, and as I recall, people were praising him for his responsiveness and his demeanor and his helpfulness.” 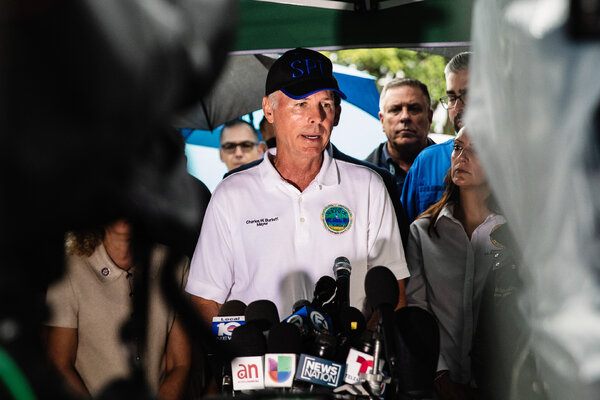 Mr. Prieto’s personnel file in Surfside suggests that city officials were closely scrutinizing the building department during the time he worked there.

In 2019, the town manager put the department under administrative review. In a memo, Guillermo Olmedillo, who was then the town manager, ordered Mr. Prieto to come up with an action plan that included weekly reports of all the inspections completed.

In an interview, Mr. Olmedillo said his goal had been to modernize the permitting system and eventually outsource building inspections to the county. He had no problems with Mr. Prieto’s work, he said.

“His car was there earlier than mine, that I can tell you,” Mr. Olmedillo said. “With building departments, there’s usually a lot of complaints. People complain about delays in plan reviews, delays in inspections. It’s kind of typical.”

Mr. Prieto’s file reflects only one performance evaluation, where Mr. Prieto scored good marks. He left Surfside in October and started working at C.A.P. Government Inc., a company that provides building inspection services to municipalities. Through that company, he served as interim building official for the city of Doral, which paid C.A.P. $110 an hour for his services.

The collapse at the kennel club in 1997 was blamed on the demolition subcontracting company, which had a long record of safety violations and was accused of using dangerous techniques during the work.

The company, which was unlicensed, was fined $90,000 by the Occupational Safety and Health Administration. The company that obtained the city permit for the subcontractor, which itself had no role in the project, had its license suspended.

Officials and construction experts at the time said the case had revealed the lack of strict code requirements for conducting and supervising demolition work.

Mr. Haar, who moved to North Carolina after the dog track collapse, said the Surfside catastrophe had him thinking a lot about his construction accident.

“You can never have too many building inspections,” Mr. Haar said. “Companies don’t tend to inspect their own projects very well.”

US halts military training for Saudi students after shooting