It was one of the more memorable moments in the New York City mayor’s race: Eight Democratic candidates were asked at a debate earlier this month if they would accept an endorsement from Mayor Bill de Blasio.

Only one, Andrew Yang, raised his hand.

When the candidates each gave the mayor a letter grade, their consensus was that Mr. de Blasio had failed on a variety of subjects, including solving the city’s homelessness crisis and his handling of protests against police brutality last year.

After eight tumultuous years in office, Mr. de Blasio is indeed loathed in many corners of the city. But some of his policies like universal prekindergarten are popular, and he has maintained support among Black voters — a critical constituency that helped him capture the mayoralty in 2013.

With a week before the June 22 primary, Mr. de Blasio has not made an endorsement and has no apparent plans to do so.

But several people close to the mayor say that he favors Eric Adams, the Brooklyn borough president, and has worked behind the scenes to persuade others to endorse him.

In February, Mr. de Blasio held a meeting at Gracie Mansion with leaders of three unions to discuss the mayor’s race and told them that he preferred Mr. Adams, according to two people who were familiar with the conversations.

All the unions at the meeting — the Hotel Trades Council, District Council 37 and 32BJ SEIU — endorsed Mr. Adams a short time later in March.

An official from one of those unions who asked for anonymity to protect his relationship with the mayor said that Mr. de Blasio had not only later lobbied his union to support Mr. Adams, but that he had witnessed the mayor try to persuade others to back him. The Gracie Mansion gathering was reported by Politico New York.

“We’ve had many conversations. He is supporting Eric, and he’s pushing for Eric,” the union official said.

The mayor and Mr. Adams have been allies over their long political careers, rose in the same Brooklyn political circles and share many of the same supporters. People close to the mayor said that Mr. de Blasio also believes that Mr. Adams shares his passion for reducing poverty and is best positioned to protect his progressive legacy.

When Mr. Adams was criticized for his support of the Police Department’s limited use of the stop-and-frisk tactic, and questioned whether he was being truthful about where he lived, Mr. de Blasio defended him.

“Here’s a guy who, you know, born and raised in New York City,” the mayor said last week. “We know his personal story. He overcame adversity, became a police officer, served for 20-plus years, became an elected official, has served Brooklyn for a long time. I just don’t see an issue here. Clearly a New Yorker, clearly a Brooklynite.”

The mayor also asserted last month that Mr. Adams had been “a strong voice for police reform and against police brutality for decades.”

Bill Neidhardt, the mayor’s press secretary, insisted that Mr. de Blasio has not made a final choice for mayor.

“The mayor has spoken favorably about multiple candidates to unions and political leaders across the city,” Mr. Neidhardt said on Monday. “The mayor views this as an incredibly fluid race, and has not decided who he will rank first on his ballot, let alone whether he will endorse in the race.”

Mr. de Blasio has been sparing in his praise of Maya Wiley, his former counsel, and Kathryn Garcia, his former sanitation commissioner.

Ms. Wiley, in particular, would seem more philosophically aligned with Mr. de Blasio than Mr. Adams or Ms. Garcia, who are more moderate in many of their stances. But Ms. Wiley and Ms. Garcia have tried to distance themselves from Mr. de Blasio, criticizing his tenure at almost every opportunity.

“He gets an F when it comes to what happened this past summer with police accountability,” Ms. Wiley, who also led the Civilian Complaint Review Board, which reviews police misconduct, said of the mayor at a recent debate. 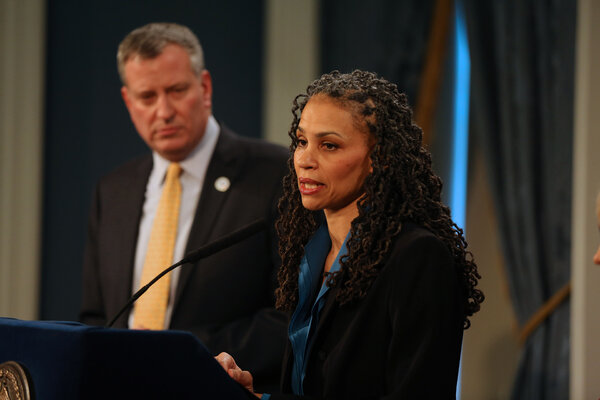 Those close to the mayor said he could live with Ms. Wiley or Ms. Garcia as mayor, even though he has been annoyed by a few of the attacks, including criticism from Ms. Garcia over the ThriveNYC program, the mental health initiative that Mr. de Blasio’s wife, Chirlane McCray, has overseen.

Stacy R. Lynch, a City Council candidate in West Harlem and the mayor’s former deputy director of intergovernmental affairs, said she suspected that Mr. de Blasio was hurt by criticism from the candidates.

“He loves being mayor, but he may love politics more than being mayor,” Ms. Lynch said. “When you are the kid on the bench that nobody wants to select to be on their team, that has to be painful.”