OAKLAND, Calif. — Under a highway overpass in downtown Oakland, Camilla Everette sleeps on a couch, with a blue-and-white-striped summer parasol offering the only protection from the drops of rainwater that fall from the concrete above her.

One of the first things Ms. Everette sees when she wakes every morning is a giant billboard featuring happy-looking families in Christmas sweaters and felt-fringed Santa hats. There are glasses of red wine on the table before them and an ominous warning: “Don’t Invite Covid-19 Home for the Holidays. Wear a Mask.”

Ms. Everette’s living conditions and those of many others like her — the isolation, and lack of indoor shelter — appear to have helped prevent the most dire predictions about the spread of the coronavirus in homeless populations from coming true.

Early in the pandemic, health officials were terrified that the virus would decimate America’s homeless, the half million people who live in shelters or on the streets. As the year comes to a close, those same specialists say they are relieved that street encampments and homeless shelters did not suffer the same devastation as nursing homes. 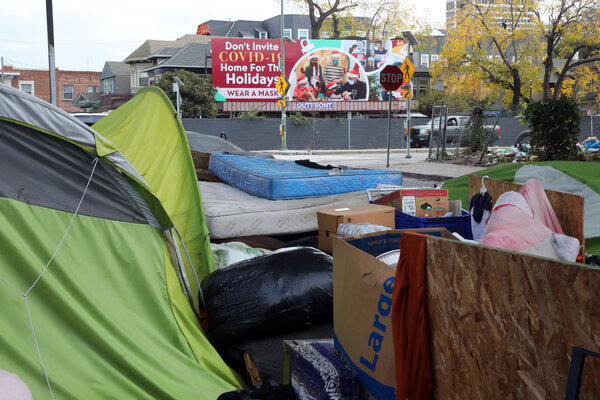 Experts caution that the transitory nature of homelessness makes it challenging to gather precise data. And they remain anxious because overall rates of the virus soared throughout the fall. A recent outbreak at a shelter in San Diego served as a reminder that homeless populations, especially those sheltered indoors, are still very vulnerable to the dangers of Covid-19.

“It’s been pretty clear in sheltered settings that when infections enter they spread very rapidly,” said Dr. Margot Kushel, the director of the Center for Vulnerable Populations at the University of California, San Francisco.

Still, researchers and public health officials across the country have conducted testing at encampments and homeless shelters, watching for signs of outbreaks. And in places like Seattle and Los Angeles these tests have turned up relatively low rates of infection.

Dr. Helen Chu, an infectious-disease doctor in Seattle, which has one of the nation’s highest rates of homelessness, has helped conduct 2,500 tests in shelters during the pandemic. Only 15 of the tests, less than 1 percent, came back positive for the coronavirus.

“I had assumed it would be terrible in the homeless population because of how other viruses circulate,” Dr. Chu said. “It pretty much has turned out to be not as bad as I would have thought.”

Experts say that among the reasons for the better-than-expected outcomes are programs in California and New York, the states with the largest homeless populations, to provide thousands of hotel rooms for the most vulnerable homeless people. Hotel rooms are also made available for people experiencing homelessness who exhibit symptoms or come into close contact with those who are infected.

Homeless shelters and encampments are “still a tinderbox for transmission of the virus,” said Dr. Harrison Alter, interim medical director of Alameda County Health Care for the Homeless, across the Bay from San Francisco. “But we set up a system that so far — knock wood — has worked in suppressing viral transmission.”

Of the 3,200 coronavirus tests that the organization has conducted in Oakland, 2.9 percent were positive.

They approached Jon Bartell Jr., who lives in a tent on the edge of a park.

Mr. Bartell said he was not overly worried about the coronavirus because his circumstances allowed for nearly full-time social distancing. He is rarely indoors, avoids crowds and stays off public transportation. “I feel pretty safe in this park,” he said. “I don’t know anyone who has Covid — nobody.”

In California a vast majority of homeless people are unsheltered, a dismal and longstanding crisis that may have been protective during the pandemic.

“Ventilation is good and outdoor is safer,” Dr. Kushel said. “It’s a perverse advantage that so many people are unsheltered.”

Preparation has also helped. In March and April, officials in San Diego closed crowded shelters and converted the city’s convention center into a giant socially distanced dormitory. Occupants slept in beds spaced six feet apart and were forbidden from eating meals in groups; mask wearing was mandatory and strictly enforced. The oldest and most infirm were given hotel rooms.

“We came together and said how do we protect this population?” said Ashley Bailey, a spokeswoman for the city of San Diego. “We did a reimagining of a shelter.”

From April until early November, regular testing revealed 27 positive results in the convention center. But after Thanksgiving officials were blindsided by a spike in cases: More than 150 shelter residents tested positive. Indoor homeless shelters can appear resilient for months — and then suddenly report large outbreaks.

For decades studies have shown that death rates among homeless people were anywhere from three to eight times higher than the general population. The reasons are numerous, including drug use, lack of medical care and the wear and tear of living on the streets. Studies have also found that homeless people tend to have rates of respiratory infections higher than the general population.

It is difficult to know definitively whether homeless people infected by the coronavirus are dying at higher rates than the general population. In California, where an estimated 150,000 people are homeless, death certificates do not indicate whether someone was housed or not.

But tracking homeless health outcomes in New York is somewhat easier because a much higher percentage of homeless people live in shelters. And data from there appears to show an increased likelihood of death from the coronavirus among homeless people.

Through the end of October, 95 people in homeless shelters died of the virus in New York City, a death rate of 146 per 100,000 people. This is lower than the 231 deaths per 100,000 in the general population for the same time period.

But when the death rate of homeless shelter residents is adjusted for age, which epidemiologists say is necessary because there are many children in shelters, the adjusted rate is 76 percent higher than the general population. The calculation was made by Dr. Chuck Cleland, an associate professor in biostatistics at the New York University Grossman School of Medicine. Epidemiologists say a higher death rate among homeless people could stem from poor access to health care and pre-existing conditions.

Over all, however, there are indications that cases per capita among the homeless population in New York has been lower than the city’s general population.

The rate for the general population in the city is significantly higher: 447 cases per 10,000 people, according to a New York Times database of coronavirus cases across the country.

Los Angeles, which has the most unsheltered people in the country, has recorded 63 deaths from the virus among homeless people, according to the Los Angeles County Department of Public Health.

“This population, at least in L.A., is not dying at startling rates from Covid,” said Dr. Heidi Behforouz, a medical official for the county who focuses on homelessness.

Yet Dr. Behforouz describes what she calls the collateral damage of the pandemic.

“We’ve lost so many people, not only to this virus, but to loneliness and anxiety, fear and isolation,” Dr. Behforouz said.

Los Angeles, San Francisco and other California cities have reported huge spikes in drug overdose deaths among homeless people on the streets.

Even as worries about infections continue, epidemiologists have acknowledged that distribution of the coronavirus vaccine to homeless people will also present numerous challenges.

Although shelter workers have not been explicitly cited for priority allocation, members of an expert advisory panel to the Centers for Disease Control and Prevention said recently that local health districts had the discretion to view them as frontline essential workers.

That would put them in a priority allocation grouping with correction officers, emergency workers and grocery store clerks. When a California health official at the meeting asked about the eligibility of shelter residents themselves, committee members said that local authorities had discretion to vaccinate them simultaneously with the workers.

But vaccinating homeless people who do not live in shelters gives health officials consternation. Officials at the meeting worried that homeless people, who face physical and mental health challenges and are generally resistant to governmental authority, might be particularly difficult to persuade to be vaccinated. Long-term planning for vaccinating them had to commence immediately, they urged.

For Ms. Everette the main challenge in the days ahead is warding off the dampness and the cold of the streets. She lamented that her favorite blanket had recently disappeared.

“I might not have a building with a roof over my head but this is my home,” Ms. Everette said of her couch and belongings arrayed on the sidewalk.

What did we learn from Manafort trial?