Home » Americas » It Was a Busy Day in Washington. Here’s a Guide

Thursday was a chaotic day in Washington, from the former deputy F.B.I. director’s confirmation that the bureau considered invoking the 25th Amendment against President Trump to the president’s plan to declare a national emergency to build a border wall.

Here is a recap of some of the biggest stories:

Congress approved a spending package that would avert another government shutdown, and the president said he would sign the bill — but also declare a national emergency to build a wall along the southern border. That move supersedes Congress and will test the limits of presidential power.

The bill passed by Congress allotted $1.375 billion for fencing, a much smaller amount than the $5.7 billion Mr. Trump wanted for a border wall. “The president is doing an end run around Congress,” said Nancy Pelosi, the House speaker.

Andrew G. McCabe, former deputy director of the F.B.I., said officials at the Department of Justice considering getting cabinet officials to invoke the 25th Amendment against Mr. Trump after he ousted James Comey, the former F.B.I. chief, in 2017. Mr. McCabe made the statement on a preview of a “60 Minutes” interview set to air Sunday, which kicks off his promotional tour for a memoir.

The New York Times reported in September that Rod J. Rosenstein, the deputy attorney general, discussed “recruiting cabinet members to invoke the 25th Amendment” against the president. At the time, Mr. Rosenstein said the report was “inaccurate and factually incorrect.”

Mr. Trump responded to Mr. McCabe’s claim on Twitter, calling him a disgrace to the bureau and the United States. The Justice Department also disputed Mr. McCabe’s statement and said Mr. Rosenstein had “no basis to invoke the 25th Amendment” against Mr. Trump.

• Andrew McCabe, a Target of Trump’s F.B.I. Scorn, Is Fired Over Candor Questions 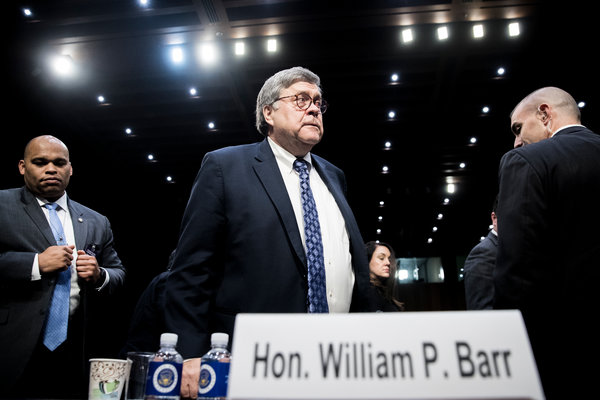 Mr. Barr, who was once attorney general under President George Bush, was confirmed by Congress to lead the Department of Justice. He will oversee the agency’s investigation into Russia’s involvement in the 2016 election, led by the special counsel, Robert S. Mueller III.

Republicans, like Senator Lindsey Graham of South Carolina, said Mr. Barr will add “steady leadership” to a Justice Department roiled by Jeff Sessions’s departure in November. Mr. Barr said he would not be swayed by politics, but he did not promise to publicize the special counsel’s findings, upsetting Democrats. During Mr. Barr’s hearings, Democrats questioned a memo he wrote in June that said presidents had broad authority to “start or stop a law enforcement proceeding.”

The president is in “very good health.” But he’s also obese.

The weight gain tipped Mr. Trump’s body mass index up to 30.4. Anything over 30 is classified as obese. Last year, President Trump said he wanted to lose at least 10 pounds.

• At 243 Pounds, Trump Tips the Scale Into Obesity

• Trump Is in ‘Very Good Health’ Following His Annual Physical, His Doctor Says