Juno award-winning singer-songwriter Jann Arden brought star power to a protest at the Calgary International Airport on Tuesday, drawing attention to the export of draft horses to Asia for slaughter as a shipment prepared to depart.

Horse meat is considered a delicacy in Japan, where it is often served raw.

Arden called the practice heartbreaking and gut-wrenching, saying the export of live animals has to stop across the board.

“We can hear some very beautiful horses… kicking in crates already,” she said.

“They haven’t even left the Calgary airport yet. They’ve got two days in turbulence on an aircraft. No food. No water. Not knowing what the hell is happening and a very unhappy ending.”

Arden said horses are crammed into crates, sometimes arriving at their final destination injured or dead.

“These horses cannot take the stress. It’s just an appalling thing. There’s no care or attention paid to the service that the Alberta horse has paid to this country, to this province,” she said.

“Further to that, these aren’t just wasteful horses that people got tired of riding or didn’t want to pet anymore; these are horses specifically bred to be eaten an ocean away.”

The animals shouldn’t have to endure the distress, Arden said, questioning why the practice is so clandestine.

“There’s a lot of monetary gain for a very few, handful of people. That’s why this happens,” she said. 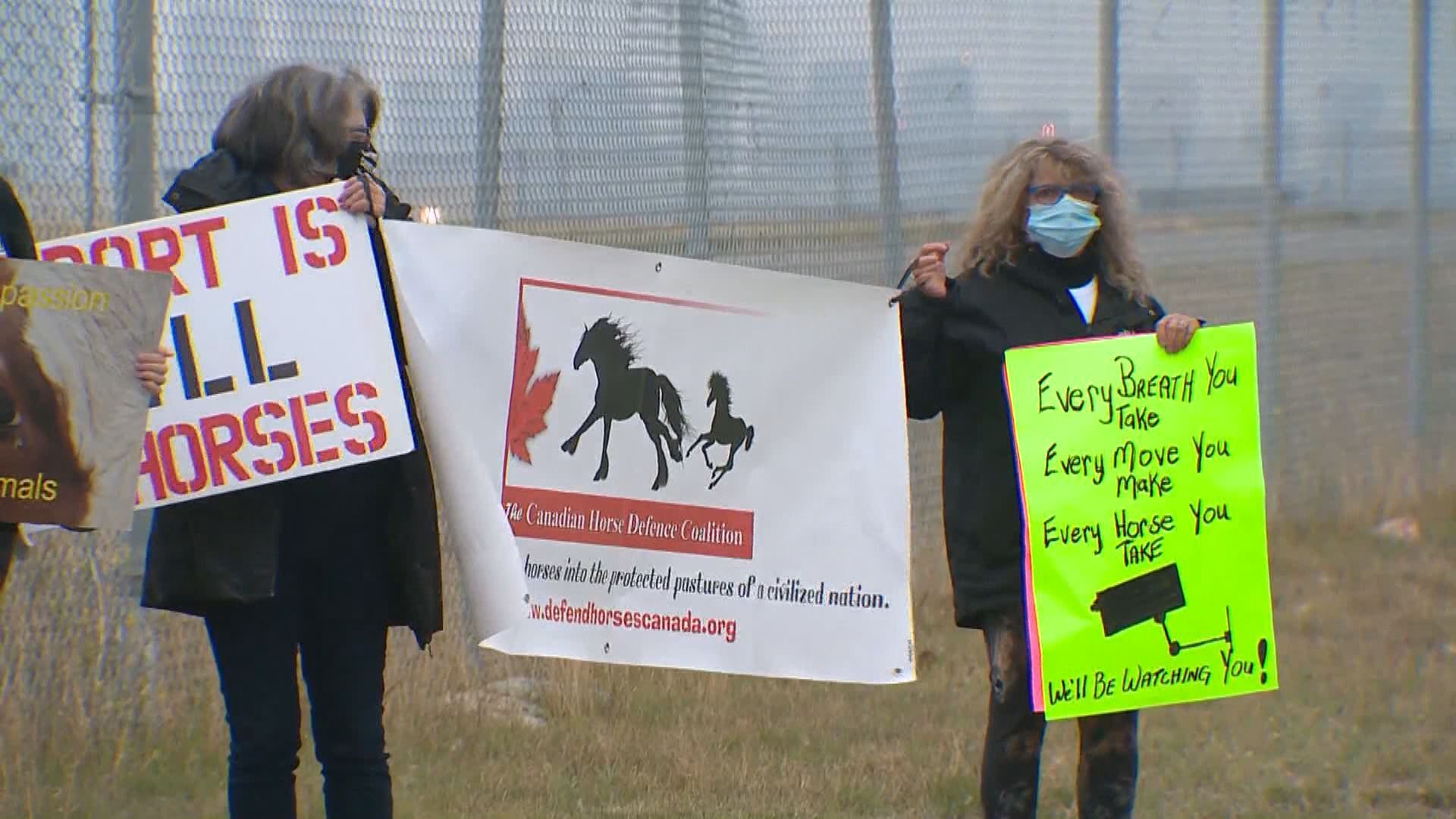 Veterinarian Judith Samson-French has been against the live export of horses for years.

“I think we have pushed agriculture way too far by the time we are transporting live animals an ocean away to be slaughtered somewhere else,” she explained.

“They’re not used to being transported, they haven’t been exposed to these stresses, and they can be permitted in transport for 36 hours. Other countries allow only 28 hours in the United States and 24 hours in Europe. We should not be doing this.”

The Canadian Food Inspection Agency told Global News that horse flights from Calgary to Japan take 11 to 12 hours, adding that changes to the Health of Animals Regulations came into effect on Feb. 20.

The CFIA told Global News it takes animal welfare seriously and is “committed to the humane transport of animals.”

“CFIA inspection includes evaluating the health status of animals as they arrive from their premises of origin and observing the loading process into acceptable crates for proper transport,” it said.

In addition to other requirements, the regulations state that crates must be “designed, constructed, equipped, maintained and used to prevent animal suffering, injury or death.”

“Every air shipment of horses leaving Canada is inspected by a CFIA veterinarian,” the agency said.

“A shipment of horses will not be authorized to leave Canada if the veterinarian is not satisfied that the animals meet the export requirements and can be transported safely and humanely.”

The CFIA said it is focusing enforcement on “compliance promotion for the feed, water and rest requirements of the new regulations through education and awareness measures.”

Samson-French said Alberta has two internationally certified slaughterhouses, so if people want to eat horse meat, the animals should be slaughtered close to home.

“This is not to feed the poor in another country; this is to feed the very wealthy,” she said.