One by one the women walked up to the podium.

Some were trembling, unable to hold back tears. Other spoke quietly and calmly about the sexual and emotional abuse they say they suffered at the hands of Jeffrey Epstein.

They talked about years of suicidal thoughts, shame, self-loathing and pure outrage.

Chauntae Davies told the packed court: “I have suffered and he has won.” 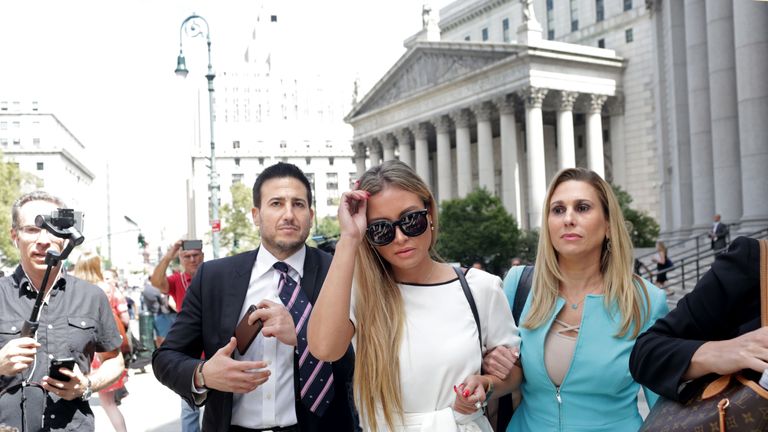 She says he raped her after being told to give him a massage. Her protests, she said “just seemed to excite him more”.

It was less than three weeks ago that the financier and registered sex offender was found dead in the Manhattan jail where he was awaiting trial on sex trafficking charges.

It was an unprecedented move to allow victims and their lawyers to speak at a hearing that was initially about the routine dismissal of the case following Epstein’s suicide.

It was a fairly short notice arrangement. Many accusers could not attend – not all of those that did chose to speak.

But those who did spoke powerfully about being robbed of innocence and childhood. One woman said Epstein “took away the chance I had at having the future I had envisioned for myself as a young girl”.

Another said: “He was leeching off the souls of young girls.”

They gave accounts of how he preyed on vulnerabilities. One woman said that she was recruited in a mall shortly after her mother died of cancer. Her dying wish had been for her daughter to master the violin. She was invited to play for Epstein.

Instead of listening he sexually assaulted her.

They also spoke of being robbed of justice after his death denied them the trial so many of them wanted.

“His ghost is laughing at us,” said one of the accusers. Another who spoke anonymously said she had been asked why she and others had stayed close to Epstein and spent so much time in his company.

She likened the experience to a frog in a pot slowly heating adding: “You didn’t realise it was happening.” Several women have are now seeking damages for what they claim was years of abuse. Shortly before his death Epstein put his $577bn worth of assets into a trust which its thought could make those payments at least more complicated.

The women’s trauma is not over but today’s hearing clearly empowered some of them, finally giving them a voice.

Aided by a strong economy, Trump approval rises, but a majority see him as 'unpresidential'