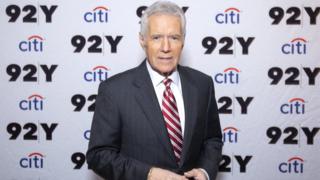 Alex Trebek, the longtime host of American television quiz show Jeopardy, has announced he has cancer.

In a video posted on Wednesday, Mr Trebek, 78, says he has been diagnosed with stage four pancreatic cancer.

He vowed to fight the disease and noted that 50,000 people are diagnosed with pancreatic cancer in the United States each year.

Mr Trebek has hosted Jeopardy since 1984, and has received numerous awards and honours for his work.

In a statement uploaded to the Jeopardy YouTube channel, he said that “normally the prognosis for [his cancer] is not very encouraging”.

A Message from Alex Trebek: pic.twitter.com/LbxcIyeTCF

Taking a lighter tone, the Canadian-American presenter also quipped he had no choice but to beat the cancer because his contract has locked him into hosting Jeopardy for another three years.

Mr Trebek has fronted thousands of episodes of the popular syndicated quiz show, making him among the most well-known people on television in the US and Canada.

In 2014 he set a Guinness World Record for “most game show episodes hosted by the same presenter”.