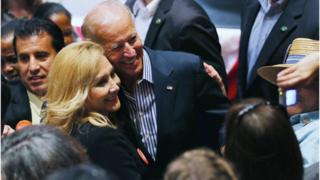 Former Vice President Joe Biden is what used to be described as “touchy feely.” He is physical, with everyone. He is also known as one of the more empathetic politicians around – the guy who calls when you have a problem and just listens.

But now two women say the touchy was a problem and the feely inappropriate.

This needs some professional context. Physical contact with supporters has been a necessary part of political campaigning for decades. The candidate who tries to run for office and refuses all physical contact with voters would soon be dismissed as cold and aloof.

In Biden’s defence, several women have come forward to say that he has hugged and touched them too and it never felt inappropriate, only affectionate.

So clearly there’s a line politicians have to walk. Physical, but not in the wrong way.

I’d posit that most women know exactly which side of the line any particular physical contact falls on – whether it is indeed appropriate or inappropriate. We just feel it. Women of my generation put up with too much inappropriate contact for years, assuming it was simply one of the costs of having a job in a largely male environment.

Younger women are less tolerant. Thank God. They have much less time for men behaving badly. So in many ways this is a story of generational differences. Biden is 76, he came of age at a time when touching wasn’t automatically taboo – maybe it should have been, but it wasn’t.

Social movements are not black and white, they need to mature enough to deal with shades of grey. And Joe Biden’s case is on the spectrum of greyness.

Is there an exemption for people of a different generation who behaved in a way that was culturally acceptable for their time? Is there a statute of limitations on past transgressions? Who gets to play judge and jury in accusations like these? And, in politics, is there a different standard for Democrats and Republicans?

It’s almost too easy to contrast Biden with Donald Trump, who, on video, relished his ability to grab women’s genitals and is now President of the United States. But the Democratic Party, in this era, has set itself up as the party of moral purity, on gender as well as race. It is the zero tolerance party so its politicians will inevitably be held to a different standard.

Joe Biden hasn’t announced whether he is going to run yet. These allegations may mean he fights harder and announces soon, but they may also mean he never does. His supporters would say that’s a travesty of justice and Democrats would be shooting themselves in the foot, losing a candidate with as good a chance as any of unseating Mr Trump.

But Biden would be running in 2019 not 1999 and today there is a big difference in perceptions of what is appropriate behaviour.

In this moment, after all the traumas and stories and successes of #MeToo, Mr Biden’s touchy-feely style may just be unacceptable. So these accusations have perhaps raised questions about Joe Biden’s suitability that have more to do with age than gender.

Mr Biden has yet to jump into the race, but plenty have. So who else has a shot at becoming the next president?

Latin America's virus victims, and the spaces they leave behind