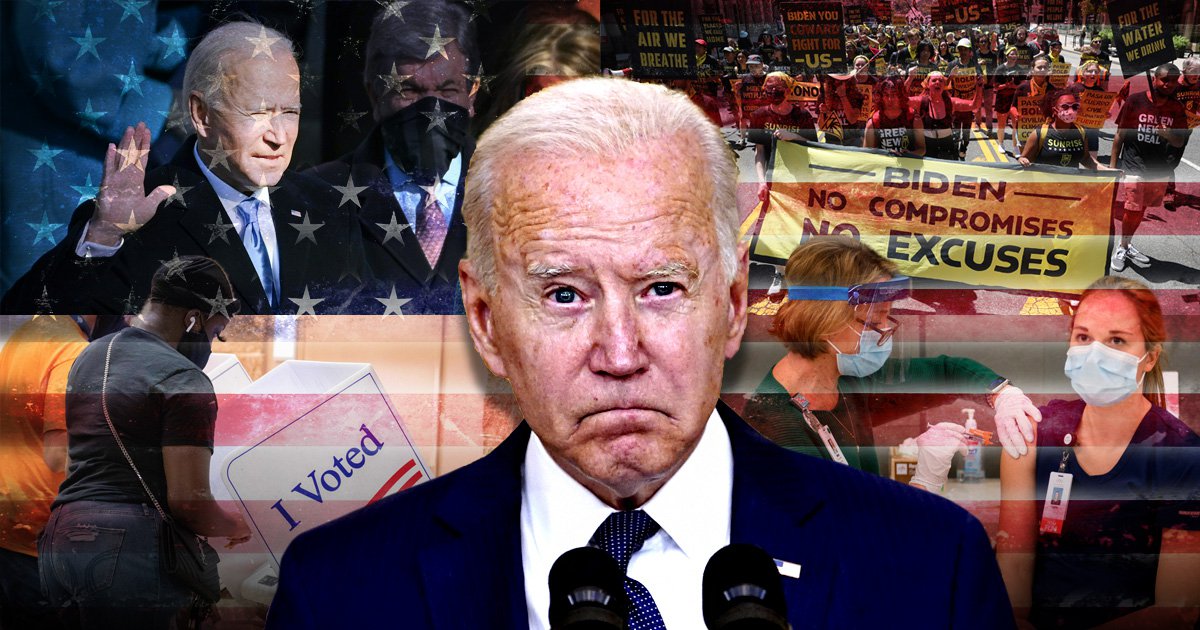 At the one-year mark of his presidency, Joe Biden, whom voters felt could bring a sense of normalcy back to the White House, has kept some of his campaign promises – but many Americans say he has not accomplished nearly enough of what he promised.

It’s not surprising the 46th president has received mixed reviews. Biden took office during a particularly polarizing time in American history. He entered the Oval Office with a long list of Democratic policy priorities in the face of a once-in-a-century pandemic.

During his inauguration, Biden spoke of two sicknesses plaguing the country: the coronavirus and a threat to the nation’s democracy. Specifically, he called for an end to the ‘uncivil war’ of the January 6 Capitol riot that carried over in American politics from his predecessor’s term.

‘End this uncivil war,’ Biden said during his inaugural speech a year ago on January 20, 2021. He then said ‘We can overcome this deadly virus.’

Neither of those troubles have ceased, though Biden has seen some success on the coronavirus front.

In March, $1.9trillion worth of coronavirus relief funds passed, and as of Tuesday, 74% of all American adults are fully vaccinated against Covid-19, White House Press Secretary Jen Psaki said.

Biden achieved his goal of administering 100million Covid-19 shots within his first 100 days in office. But his vaccination efforts have since hit a wall.

The president has faced harsh criticism for what he’s done in response to the pandemic, and has even admitted to his own shortcomings, including when he failed to order 500million at-home Covid tests in a timely manner. He told ABC’s David Muir in December that ‘nothing’s been good enough’.

After supporters of former President Donald Trump tried to overturn the 2020 presidential election results, Biden pushed for legislation protecting voting rights. Yet Biden’s attempt to get the Senate to change its rules to pass bills by a simple majority was immediately shot down by two moderate members of his own party.

When asked about the push during Tuesday’s briefing, Psaki told reporters that Biden’s view is that ‘it’s never a good idea not to shoot for the moon with what your proposals are and what you’re fighting for’.

‘The alternative is to fight for nothing,’ Psaki said. ‘Oftentimes you don’t get everything done in the first year. What we feel good about is that coming in to an incredibly difficult circumstance, fighting a pandemic, a massive economic downturn as a result, an administration that was prior to us that did not effectively deal with these crisis – that there’s been a lot of progress made.’

Psaki acknowledged that there’s still a lot to be done, adding that Biden will touch upon how to build upon what they’ve accomplished during his one-year speech on Wednesday.

Many supporters of Biden have expressed frustration after his push for voting rights legislation stalled, causing concern that democratic principals are at risk once again.

The American job market saw its largest growth in its history over the past year, the White House has repeatedly claimed.

Having inherited an economy devastated by the coronavirus pandemic, the low unemployment rate now compared to last year is a highlight for the president, Psaki said, adding that the unemployment rate fell from 6.4% to 3.9%.

Biden in his monthly remarks on the job reports has been focusing on the low unemployment rate while ignoring that job growth has not met economists’ expectations. Regarding December’s job report, Biden called the drop in the unemployment rate a ‘historic day for our economic recovery’.

A major focus of Biden’s campaign was improving the US’s image on the world stage. Biden fulfilled a campaign promise by rejoining the Paris Agreement on climate change and the World Health Organization, restoring relationships that had been tarnished by Trump.

He also kept his promise of bringing together world leaders for a virtual conference on climate change, and later hosted more than 100 countries for a virtual summit on democracy.

Pulling US troops from Afghanistan

Biden also kept his promise to end the war in Afghanistan, though he faced widespread criticism for a chaotic exit in which Americans and civilians dangerously scrambled for flights out of the country under Taliban control.

While vice president, Biden opposed sending more US troops to Afghanistan. The exit he commanded in August was deemed hasty and resulted in a suicide bombing that killed 13 American troops.

Over the past year, Biden confirmed 41 federal judges, more than any of his recent predecessors during the same time in their presidencies.

Of those judges, 80% are women and 53% are people of color, according to the White House.

The Supreme Court blocked Biden’s vaccinate-or-test mandate for most large employers, signaling the defeat of one of his major initiatives to fight Covid-19.

During Biden’s first year inflation has also hit a 40-year high. Biden casted the annual inflation of 7% as a ‘global challenge,’ and has repeatedly said that his administration is making progress despite persistent supply chain issues.

‘Today’s report – which shows a meaningful reduction in headline inflation over last month, with gas prices and food prices falling – demonstrates that we are making progress in slowing the rate of price increases,’ Biden stated.

Higher prices have led to growing disapproval of Biden’s economic leadership. Gasoline and groceries now cost more, and some economists claim it’s a sign that Biden’s relief package was too large.

Over $4trillion of big ideas

Many of the Biden’s goals have been considered overly ambitious, and for that reason, many have remained unfulfilled.

He began his presidency looking for about $4 trillion to put toward coronavirus relief, infrastructure, jobs and helping families — much more than the Senate would be willing to consider.

After $1.9trillion worth of coronavirus relief passed in March, which in many first years in office would have been deemed a success, Biden kept pushing for more. The $2.3trillion he hoped would go to infrastructure and jobs was whittled down to $1trillion.

Even while the package was diminished, there will be 15,000 highway bridges repaired just from one initiative under the program, a major win as the nation’s infrastructure has been in serious need of an overhaul.

Biden separately proposed $1.8trillion for a package of social and climate initiatives, but that was modified and unable to clear the Senate.

That proposal, what Biden has called Build Back Better, contained a decades-old wish list of Democratic priorities that include a child care tax credit, climate legislation, paid family leave and universal pre-K, among other provisions.

Despite his best efforts, most of these Democratic policies remain unfulfilled one year into his term.