Home » Americas » John Turner, Briefly Its Leader but Long a Force in Canada, Dies at 91

John Turner, a Canadian politician who introduced major reforms to Canadian law, fleetingly served as prime minister and then rose again to prominence by leading the opposition to a free trade deal with the United States, died on Sept. 19 at his home in Toronto. He was 91.

His death was confirmed by Marc Kealey, a former aide who is acting as a spokesman for the family. No cause was given.

Mr. Turner was prime minister for just 79 days in 1984, the second-shortest tenure of any of his predecessors. (The shortest was Prime Minister Charles Tupper’s — 69 days in 1896.)

Mr. Turner led his country after taking a nine-year hiatus from what had been a busy political career and then yielding, somewhat reluctantly, to calls from senior Liberal Party members to enter the race to replace Prime Minister Pierre Elliott Trudeau, who was retiring.

At the time, Mr. Turner, whose down-to-earth manner contrasted markedly with Mr. Trudeau’s aloofness, was more popular than the prime minister in polls.

A respected lawyer, Rhodes scholar, and accomplished sprinter who had narrowly missed the 1948 Olympics, Mr. Turner had long been touted as a potential prime minister. But after taking office he was soon persuaded to call a general election to build on his popularity.

The plan backfired when the Liberals lost to the Progressive Conservatives under Brian Mulroney, succumbing to a combination of inaccurate polling, gaffe-prone campaigning and, above all, a national mood that had soured on Mr. Trudeau.

It didn’t help that early in his campaign television networks aired video of Mr. Turner patting the posterior of Iona Campagnolo, the party’s president, an action that alienated many women. In his televised appearances his choppy speaking style did not compare favorably with Mr. Mulroney’s smooth delivery. And everywhere he went, Mr. Turner encountered anger over Mr. Trudeau’s legacy.

It all came together in one of the most famous televised debates in Canadian politics. During the event, Mr. Mulroney asked Mr. Turner why he had fulfilled Mr. Trudeau’s outgoing request to appoint 200 Liberal Party supporters to the unelected Senate, to the Canadian bench and to various posts in government agencies and government-owned corporations.

Mr. Turner replied that he had had no choice.

“You had an option, sir,” Mr. Mulroney fired back. “You could have said, ‘I am not going to do it, this is wrong for Canada.’”

It was a decisive blow. Mr. Turner was visibly flustered. And though he kept his seat in the House of Commons, the Liberals as a whole were devastated. 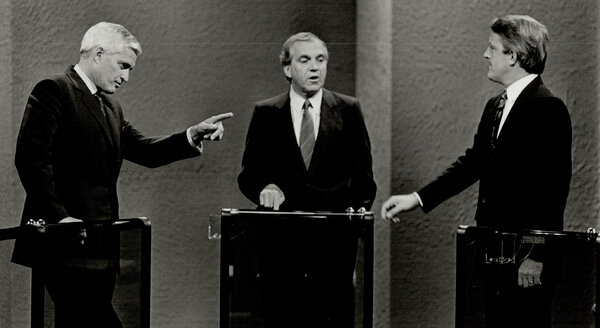 John Napier Wyndham Turner — known as Chick to his friends — was born in Richmond, England (which is now part of London), on June 7, 1929. His mother, Phyllis (Gregory) Turner, was the daughter of a mining engineer. She had made her way from Rossland, British Columbia, to England on a scholarship to complete a doctorate in economics. There she met Leonard Turner, who was living off the wealth from his family’s trade business. John’s sister, Brenda, was born in 1931. A year later, Leonard Turner died of pneumonia.

Back in Canada, Mrs. Turner moved with her children to Ottawa, where she found work in the federal government as an economist. There, she met Frank Ross, a Scottish-born industrialist who had volunteered to help run the Canadian economy during World War II. At the war’s end, when Chick Turner was 16, the couple married, and the family moved to Mr. Ross’s mansion in an exclusive section of Vancouver, British Columbia.

After attending the University of British Columbia, Mr. Turner used his Rhodes scholarship to earn a law degree from Oxford University. On his return to Canada, he began practicing in Montreal, Canada’s largest city and its financial and corporate center at the time.

Mr. Turner met his future wife, Geills McCrae Kilgour, during his first successful political campaign for Parliament in 1962; she was working as a data analyst. She survives him, along with a daughter, Elizabeth Turner; three sons, Michael, David and Andrew; and his sister.

After Mr. Trudeau was elected prime minister in 1968, he thrust Mr. Turner into high-profile cabinet positions. Succeeding Mr. Trudeau as justice minister, he shepherded through Parliament sweeping criminal law legislation that legalized homosexuality and abortion and reformed divorce laws, among other measures. Later, as finance minister, he grappled with what came to be known as “stagflation,” a vexing period of both high inflation and high unemployment.

Paul Litt, a historian and Mr. Turner’s biographer, wrote that Mr. Turner’s work as justice minister and finance minister was critical to implementing Mr. Trudeau’s vision of a “just society.”

“Trudeau inspired Canadians with his principled causes, but often it was Turner who made them work,” Professor Litt wrote in “Elusive Destiny: The Political Vocation of John Napier Turner” (2011). “More than any other Canadian politician, he translated the spirit of the 1960s into substantial changes to the laws of the land.”

Ed Lumley, a cabinet minister of the era, said that Mr. Turner had offset many of Mr. Trudeau’s political weaknesses. “As a team, they were terrific,” he said. But the partnership dissolved in 1975, when Mr. Turner returned to practicing law for nearly a decade.

In a statement, Justin Trudeau, the current prime minister and the son of Pierre Elliott Trudeau, called Mr. Turner “a gifted politician, lawyer, and athlete” and a “humble man with a strong social conscience.”

After his defeat in 1984, Mr. Turner, as the opposition leader, campaigned to return the Liberals to power in 1988 and again met Mr. Mulroney in another widely viewed election debate.

The country at the time was polarized over a free-trade deal with the United States that Mr. Mulroney had negotiated with the Reagan administration. While the pact was strongly supported by the business community, there were widespread concerns that when American goods began pouring into the country, factories would close and jobs would disappear. Mr. Turner said the deal was a threat to Canadian sovereignty.

“With one signature of a pen,” he said, Mr. Mulroney had made Canada “into a colony of the United States, because when the economic levers go, the political independence is sure to follow.”

Though many commentators thought that Mr. Turner had bettered Mr. Mulroney in the debate, the Liberals lost the election. But they did reverse many of their losses from four years earlier thanks largely to efforts by Mr. Turner to rebuild the party’s fund-raising and campaign machinery.

Mr. Turner later said that he had no regrets about opposing the trade agreement, which he called “the fight of my life.”

As he had predicted, the United States went on to take repeated actions against Canadian exports despite the Reagan-Mulroney trade pact and its successor, the North American Free Trade Agreement.

“I’m a free trader, but I want mutual free trade,” Mr. Turner told The Globe and Mail in 2012. “The way it was negotiated with the United States, only Canadian jobs were at stake.”

US ‘ready for serious negotiations’ with Iran

STB and Airbnb join hands to promote local virtual experiences globally
We and our partners use cookies on this site to improve our service, perform analytics, personalize advertising, measure advertising performance, and remember website preferences.Ok