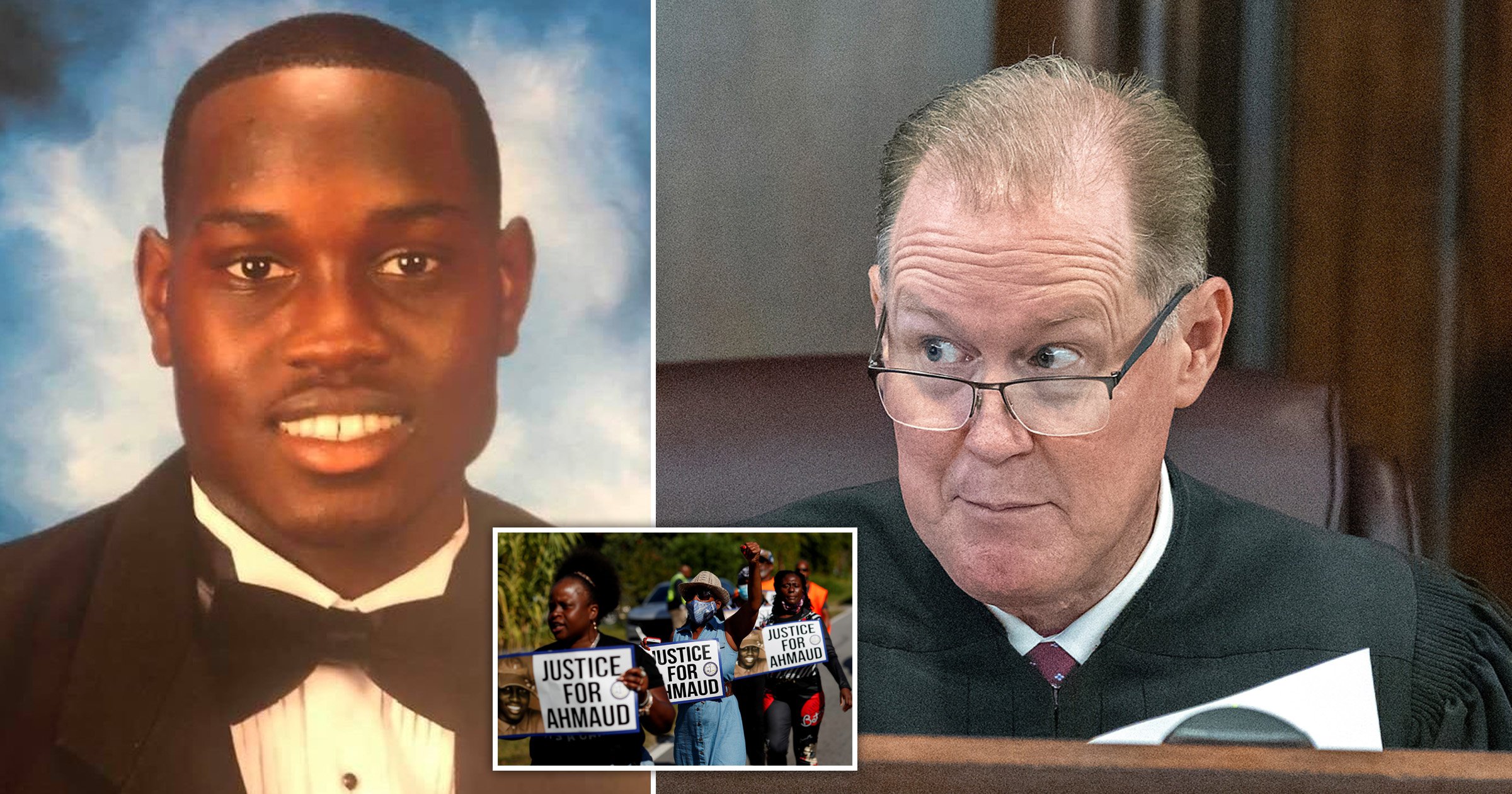 A judge is allowing a jury with just one black person and 11 whites to decide the fate of three white men accused in the shooting death of black man Ahmaud Arbery – despite acknowledging what appears to be ‘intentional discrimination’.

The two-and-a-half-week selection process ended with prosecutors for the state accusing defense attorneys of disproportionately cutting qualified black jurors because of their race.

‘This court has found that there appears to be intentional discrimination,’ Walmsley said Wednesday.

While race is a central issue in the case, Walmsley said state law in Georgia, where the trial is taking place, limits his authority to intervene with jury selection.

In February 2020, Greg McMichael and his adult son Travis McMichael armed themselves and pursued Arbery, 25, in a pickup truck after they spotted him running in their coastal Georgia neighborhood.

Their neighbor, William ‘Roddie’ Bryan, joined the chase in his own truck, where he captured graphic cellphone footage of Travis shooting Arbery three times with a shotgun.

No one was charged in Arbery’s death until more than two months afterward, when the video of the shooting was leaked online. The Georgia Bureau of Investigation took over the case and arrested all three men on murder charges.

After attorneys narrowed a panel of 48 potential jurors down to 12, prosecutor Linda Dunikoski pointed out that only one black juror made the panel. Dunikoski argued that defense lawyers had struck eight black potential jurors due to their race and said it is unconstitutional.

But Laura Hogue, an attorney for Greg, insisted the panelists who were cut were scrapped for other reasons, namely for expressing strong opinions about the case when questioned individually.

‘I can give you a race-neutral reason for any one of these,’ Hogue said.

One juror who was cut had written on her questionnaire that Arbery was shot ‘due to his color’ and that she felt the defendants were guilty, Hogue said.

Walmsley denied prosecutors’ request to reinstate those eight black potential jurors. He said his ability to change the jury’s racial makeup was limited because defense attorneys were able to give nonracial reasons for their decisions to strike the potential black jurors.

The jury of 12, as well as four alternates, will be seated and sworn in on Friday, the same day opening statements in the murder trial are expected. Walmsley did not say the races of the alternate jurors.

While Arbery’s mother told reporters the racial makeup of the jury was ‘devastating’, she said she still had faith in their ability to ‘make the right decision after seeing all the evidence’.

Her attorney, S Lee Merritt, said he still believes the trial will end in a conviction despite the fact that defense lawyers ‘created a jury that was more favorable for their defendants, an almost entirely white jury’.

According to prosecutors, many of the 600 potential jurors summoned for the case expressed strong opinions on the matter. All who remained in the pool from which the 12 were chosen said they could be impartial.

Robert Rubin, the attorney for Travis, said the men were trying to detain Arbery under Georgia’s former citizen’s arrest law because they suspected him of stealing, and only resorted to violence when he fought them. He maintains Travis fired his gun in self-defense.

Investigators have said Arbery was unarmed and there’s no evidence he had stolen anything.

George Floyd: Eyes of the world on murder trial but hope his death will change history is fragile

Derek Chauvin’s lawyers want to humanize him. Some witnesses described him as cold and heartless.