Home » Americas » Just tuning in? Here’s what has happened so far on Day 4. 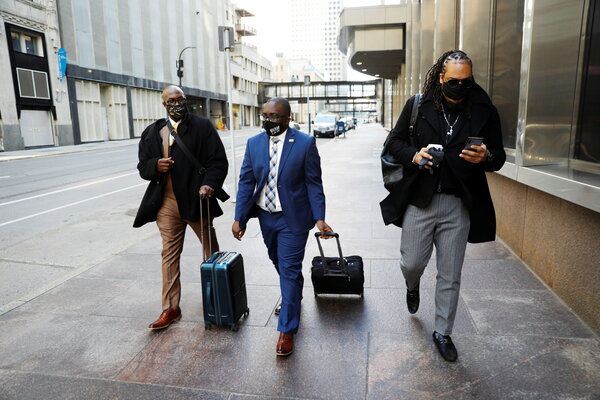 Testimony continued on the fourth day of the trial of Derek Chauvin, with appearances from George Floyd’s girlfriend and a paramedic who responded to the scene.

Here are some of the highlights so far:

Courteney Ross, who dated George Floyd for nearly three years before his death in May, was the first witness called by prosecutors. Her testimony focused on Mr. Floyd’s struggle with addiction, an attempt by prosecutors to get out in front of the argument by Mr. Chauvin’s lawyer that Mr. Floyd’s drug use may have led to his death or caused him to struggle more with officers as they tried to put him in a police car.

Ms. Ross delivered tearful testimony about their shared struggle with an opioid addiction and shared details about their relationship, including how they met and their first kiss.

Mr. Chauvin’s lawyer, Eric J. Nelson, probed Ms. Ross about her and Mr. Floyd’s drug use, asking where they purchased opioids and other drugs that she and Mr. Floyd had taken. She said they had purchased drugs from Morries Lester Hall in the past. Mr. Hall was in the car with Mr. Floyd on the day he died when the police approached him about the $20 bill. In a court filing on Wednesday, Mr. Hall said he would invoke his Fifth Amendment right against self-incrimination if called to testify in the trial.

Seth Bravinder, a paramedic for Hennepin County, took the stand after the morning break. He was on duty the day that George Floyd died and was dispatched to the scene of Floyd’s arrest. Mr. Bravinder answered questions about the treatments given to Mr. Floyd and attempts to resuscitate him.

He said that Mr. Floyd appeared lifeless when they arrived to the scene. “I didn’t see any breathing or movement,” he said.

There Are 472,000 Words in the Dictionary. For the Spelling Bee, That May Not Be Enough.

For Migrants on Both Sides of the Border, the One Constant Is a Long Wait