Kenneth C. Kelly just wanted to buy a house near his office. An electrical engineer, he had moved to Los Angeles from New York in 1953; four years later, with a growing family, he dreamed of having a home in one of the city’s fast-growing suburbs.

He had zeroed in on Gardena, not far from his job as an engineer at the Hughes Aircraft Co. in Culver City. But he couldn’t get a real estate agent to return his calls, and he knew why: He was Black.

“They would play games, say nothing was available, blah blah blah,” he said in a 2009 interview.

Jokingly, Mr. Kelly asked a white friend if he would buy a house for him; he’ll pay him back, Mr. Kelly said. To his surprise the friend said yes, and a few weeks later the white residents in the neighborhood were shocked to see Mr. Kelly and his family moving in.

“The neighbors were up in arms,” he said. “But it was my house.”

At work, Mr. Kelly was a respected scientist, designing antennas to communicate with satellites and spacecraft; in Gardena, he was often treated as a blight. Someone wrote an anonymous note begging him to leave, claiming that he and his family were dragging down home values in the neighborhood.

In 1963, a new job took him to Northridge, in the suburban San Fernando Valley. Once again he had to ask a white friend to buy his house; once again he faced constant slights. Neighbors refused to say hello and crossed the street to avoid passing him on the sidewalk.

Mr. Kelly’s experience was typical for middle-class Black families who wanted to settle in the booming postwar suburbs. But rather than move or suffer quietly, he joined the San Fernando Valley Fair Housing Council, where he led “tests” — sending Black home buyers to agents, then suing if they were discriminated against. He became so committed to tearing down barriers to Black homeownership that in 1973 he quit his job to become a real estate agent.

During training, his instructor told him that a Black man wouldn’t be able to sell houses in the valley. Not only was the area over 80 percent white, double the rest of Los Angeles, he was told, but its biggest draw was its promise of the lily-white “good life.”

The instructor was wrong. Within a few years Mr. Kelly was one of the valley’s best salesmen, shepherding Black families into neighborhoods where there were few, if any, people of color. He also joined the San Fernando Valley Board of Realtors and served on state-level committees. In 1979 he was named the Realtor associate of the year for the valley.

He returned to engineering in 1986, again working for Hughes. By that time the valley was significantly more diverse, in part a result of Mr. Kelly’s efforts.

He died at 94 on Feb. 27 at his home in Sherman Oaks, another neighborhood in the San Fernando Valley. He had had Parkinson’s disease, his son Ron said. Mr. Kelly is also survived by his wife, Anne; his sister, Gloria John; another son, Steven; and two grandchildren. Another son, David, died in 1994. 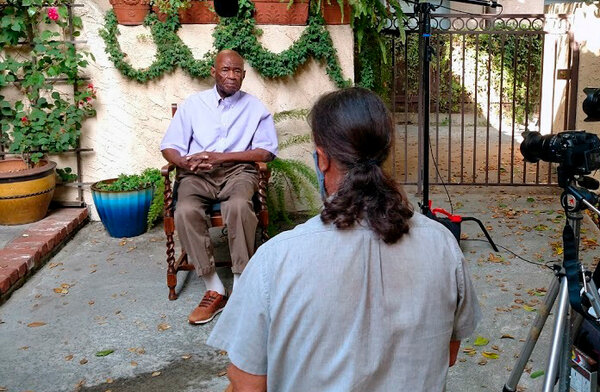 In 1968, not long after the assassination of the Rev. Dr. Martin Luther King Jr., Mr. Kelly was approached by Harriet Glickman, a white, socially conscious colleague on the fair housing council. She had reached out to Charles M. Schulz, the creator of “Peanuts,” to ask if he would consider adding a Black character. Mr. Schulz had politely demurred, saying it might seem patronizing.

Undeterred, Ms. Glickman thought that Mr. Kelly might have more luck if he made the same appeal to Mr. Schulz. In a letter to him, Mr. Kelly argued for a Black character who would be just one of the gang, a “supernumerary” whose skin color would be incidental.

“An accusation of being patronizing,” he wrote, “would be a small price to pay for the positive results that would accrue!”

His words won Mr. Schulz over, and Franklin Armstrong debuted in “Peanuts” on July 31, 1968, as a friend of Charlie Brown who just happened to be Black.

Kenneth Constantine Kelly was born on March 6, 1928, in Manhattan and raised on the Lower East Side, where he was one of only a few Black children among a sea of recent European immigrants. He later said that he could count 10 languages being spoken in his elementary school class.

His parents, Herbert and Ethlyn (Davis) Kelly, were immigrants themselves, having arrived from Jamaica a few years earlier. Mr. Kelly’s father worked for a railroad and was killed when Kenneth was 18 months old.

His mother was a domestic worker and seamstress who lived with families for stretches of time, and his brother and sister worked odd jobs, leaving Kenneth home alone. Bored, he began to tinker with electrical devices and built a battery when he was 8.

When he told his teachers that he wanted to be an engineer, most of them said that as a Black student he was aiming too high. But one teacher encouraged him to apply to the highly selective Brooklyn Technical High School.

Mr. Kelly graduated from Brooklyn Tech in 1946 and applied to be a radio and radar technician in the Navy. He was denied. Though the military was beginning to desegregate, many in the Navy still thought of Black men as stewards and cooks.

Undaunted, he wrote a letter making his case, and within weeks he was learning the latest innovations in naval communications technology.

He later returned to New York to attend Brooklyn Polytechnic Institute, today the engineering school of New York University. He graduated in 1953, the same year he married Gloria White. They took their honeymoon to South Carolina; on the way back, a truck jackknifed in front of them, hitting their car and killing her instantly.

Eager to ease his grief, Mr. Kelly applied to jobs in Southern California’s booming aerospace industry. More than one company rejected him, saying he would never find a place to live that was close enough.

But Hughes, which was heavily involved in radar and missile guidance research, was eager to hire him; in fact, when a few white engineers said they wouldn’t work with a Black man, they were told to resign. The company even paid for him to get a master’s degree at the University of California in Los Angeles.

Mr. Kelly rose quickly at Hughes, becoming a section head in 1958. Four years later he went to the Rantec Corp., a NASA subcontractor, where he helped design massive ground-based radio stations that were used to communicate with orbiting spacecraft, including the Apollo missions, and with satellites — the basis of modern satellite radio and television.

His second marriage, to Loretta Kelly, ended in divorce. He met his third wife, Anne, a fair housing advocate in Michigan, during a meeting sponsored by the Department of Housing and Urban Development. They married in 1988.

Mr. Kelly finished his career at the Jet Propulsion Laboratory in Pasadena, Calif., retiring in 2002. His last research involved designing equipment that enabled Mars rovers to communicate with the earth, some of which is still in use today.

What is a covert sonic weapon?

US women’s equality back on Capitol Hill