Home » Americas » Language, Please! Salty Feminist Stitch Book Is Too Much for Michaels.

For years, stories of social revolutions have been told with needle and thread.

In the 1980s, a massive quilt adorned with the names of people who had died from AIDS was used to spotlight government inaction on the disease. In 2014, women got out their knitting needles and started the Yarn Mission after the killing of Michael Brown in Ferguson, Mo. Pink hats were fashioned into protest icons for the Women’s March on Washington in 2017.

Hunkered down because of the pandemic, craft activists have recently drawn inspiration from challenges to equality, social justice and gender rights. But last month, Michaels, the large crafts retailer in the United States, became an unlikely source of controversy when it ordered stores to trash a book of cross-stitch patterns with feminist messages, some of which contained salty language.

As Michaels locations were stocking the book, titled “Feminist Cross-Stitch,” for Women’s History Month this month, at least two employees noticed that four of the 40 patterns contained a specific obscenity, according to the company.

They told their managers. The corporation’s headquarters took action, ordering Michaels stores in the United States to remove the books, which were tossed in the trash, the company said.

“It is our policy not to sell products with the ‘F’ word in or on it in our stores,” Michaels said in an emailed statement. “It is not in line with our brand and that policy will not change.”

The removal quickly led to backlash in online craft forums. Some called for a boycott of the store, or said they would purchase the book to support its author, Stephanie Rohr. A photograph posted on Reddit by a woman who said her mother worked at a Michaels store showed the book plastered with a sticker that said it was headed for the trash. 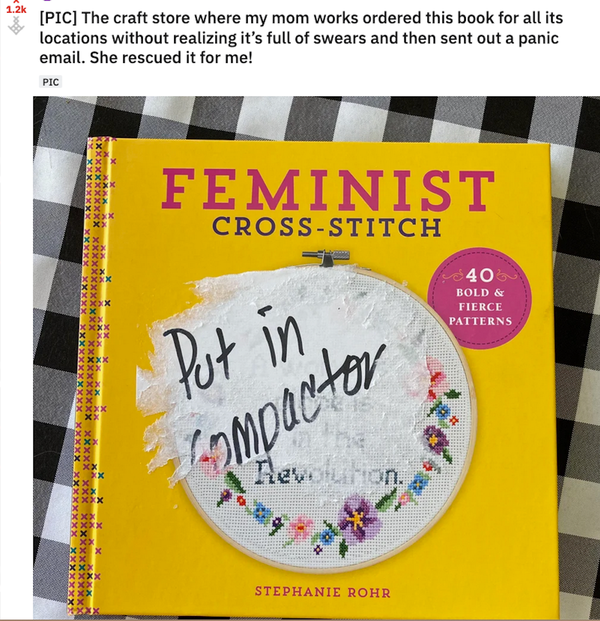 “There is something very … apt about throwing feminism in the trash because you realize some of the words make you uncomfortable,” one person wrote on the site.

“Whoever threw this out probably needs it the most,” wrote another.

But Michaels said it objected only to the swear words, pointing to concerns that a customer could pick up a copy without realizing it contained curses.

“Had this same book not had the four explicit patterns in it, it would still be on display in our stores as planned,” Michaels said.

The retailer apologized for throwing the books in the trash and said it had ordered additional copies to sell on its website with the disclaimer “Warning: Contains adult language.”

The company said it would no longer discard books.

Ms. Rohr, 36, learned cross-stitch from her mother as a child. In a recent interview, she said the idea for the book, which was published in 2019, rose from her outrage over what she saw as affronts to women’s rights during the Trump presidency.

The book includes patterns that use the same four-letter word to tell you what to do with internalized misogyny, or how feminist to be. “Women don’t owe you shit,” reads another. Curse-free designs include slogans like “Smash the patriarchy,” “Cats not catcalls” with an outline of a cat, and “Carry yourself with the confidence of a mediocre white man.” Other patterns include phrases that gained political notoriety during the Trump years: “Resist,” “Nasty woman” and “Bad Hombre.”

Michaels said it ordered the book after it was sent samples of some of the pages, none of which contained the offending word.

Ms. Rohr, who has a robust online following, said the book is also sold online by Target, Barnes & Noble, and by independent sellers in Australia and the United Kingdom. She was excited when told it would be featured at Michaels, she said. “Having a national craft chain would have been a very big deal for me,” she said.

“Of course, Michaels is a company that can have whatever standards they want,” Ms. Rohr said. “I think what resonated with a lot of people is that it’s Women’s History Month and feminist books are being showcased, unless it’s one someone objects to and is thrown in the garbage.”

Protests committed to cloth jarringly dash the stereotype of a circle of ladies engaged in small talk, heads bent over ornamental embroidery. Centuries ago, girls used needlework to practice the alphabet. Pioneer women in the United States documented their history in needlework.

Now, too, designs are templates for the times. Be it a quilt or cross-stitch, needlework is likely to be a canvas for women to express themselves, demanding the right to vote, to be paid equally or to enjoy economic freedom.

“I know what I am doing with this,” Ms. Rohr said, explaining why some of her projects include swear words. “I am taking this traditional, feminine crafty medium, and it is supposed to be making you do a double-take.”

Ms. Rohr’s book has attracted pushback in other ways.

In 2020, Liza Mohr, a Wisconsin woman, ordered it from Amazon. It arrived with “Trump 2020 MAGA” hand-scrawled inside the cover, as Forbes reported last year.

“They were that offended by the title of a book I purchased?” Ms. Mohr said in an interview. “It did not affect the book, but it also in many ways was meant to go against what the book stands for.”

Ms. Mohr received an apology from Amazon and an offer to replace it.

While crafters can be close-knit, like any community, they don’t always agree on how to respond to political issues.

In 2018, Diana Weymar created a project to collect contributions worldwide immortalizing former President Donald J. Trump’s Twitter quotes in needlework. She said some people were critical of the quotes but disagreed with the project, saying it was “giving him attention.”

“And I was like, ‘Yes we are giving him attention,” Ms. Weymar said in an interview. “I was afraid the only record of his words would be Twitter.”

She said transforming fabric, yarn or thread into a protest object shows a woman has committed a long period of time to deliberately refashioning the offending matter with her own hand, a type of empowerment that she said can be seen as threatening.

“You can’t deny the person when you see the craft,” Ms. Weymar said. “That woman with her head bent over her needlework? She is thinking about something, and it may or may not be positive.”

Ms. Rohr said she has, however, received negative reviews on Amazon.

She recalled one person used vomit emojis to show displeasure; another called her book “utter swill.” Undaunted, she applied needle and thread to that phrase, “which I turned into a beautiful cross stitch hoop,” she said. “That just comes with the territory.”

Bloomberg to fund anti-Trump efforts in key US swing states