A Louisiana man has been accused of fatally shooting three people in a neighborhood just outside New Orleans this week in what appeared to be random attacks, the authorities said Wednesday, adding that he was also a suspect in a killing in the city earlier this month.

The suspect, Sean Barrette, 22, was arrested Tuesday at his home in Metairie, a community just west of New Orleans where the three killings took place, said Joseph P. Lopinto, the sheriff for Jefferson Parish.

“This was a subject that went around and was shooting indiscriminately,” Sheriff Lopinto said at a news conference on Wednesday. “We’re talking about random victims. We’ve not been able to identify any connection between the victims and the suspect himself.”

The killings in Metairie took place on Monday and Tuesday. The police were able to home in on Mr. Barrette after they found his cellphone near the scene of the first shooting, the authorities said.

“We don’t really have a motive,” Sheriff Lopinto said. He added that Mr. Barrette “has had a history of mental problems. Recently, he had two physician emergency committals, one being in December of 2018 and another one in April of 2019.”

Capt. Jason Rivarde, a spokesman for the Jefferson Parish Sheriff’s Office, said in an email that there was “nothing to indicate race was a motivating factor.” In Metairie, two of the victims were Hispanic and one was white; in New Orleans, the victim was black. Mr. Barrette is white.

The first shooting victim this week, Isai Cadalzo, 22, was found in his car in Metairie on Monday night.

On Tuesday afternoon, reports of another shooting came in. Two men in a vehicle in Metairie had been killed: Manuel Caronia, 45, and Nicky Robeau, 57. Witnesses told the authorities that a tan sport-utility vehicle had been involved.

As the authorities investigated, they found links to a fatal shooting that had taken place in New Orleans on June 6. The victim was identified as Bruce Reed, 61. Witnesses at the time had reported seeing a tan sport-utility vehicle, and the casings found in New Orleans matched the ones found after the Metairie shootings, Sheriff Lopinto said. 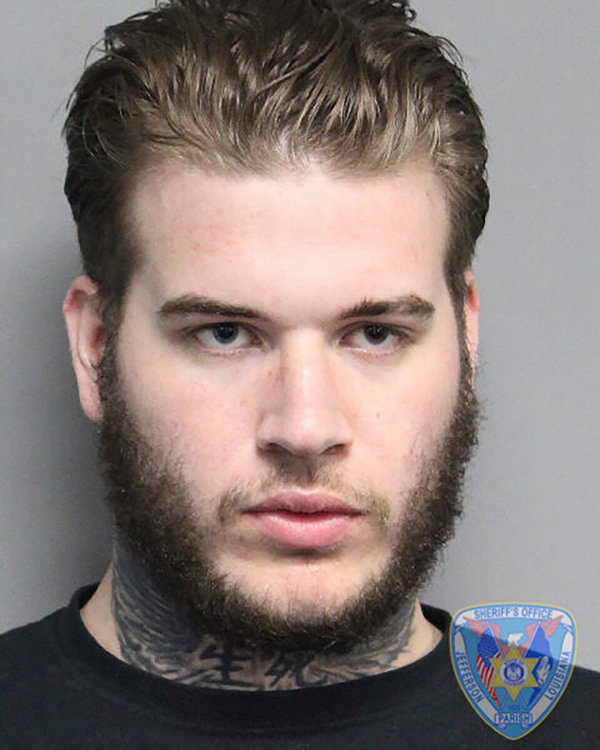 Calls to the New Orleans Police Department on Wednesday evening were not immediately returned.

As the authorities were surveilling Mr. Barrette’s residence in Metairie on Tuesday, he arrived in a tan sport-utility vehicle.

“Our SWAT team was activated and used to take Barrette into custody without incident,” the sheriff’s office said in a statement. “After obtaining warrants for the vehicle and residence, we were able to recover forensic evidence that links Barrette to both incidents.”

Included in that evidence was a handgun — a .40-caliber Smith & Wesson — that the authorities found at the bottom of Mr. Barrette’s laundry basket.

A lawyer for Mr. Barrette did not immediately respond Wednesday night to a request for comment.

Melissa Ann Romero, a daughter of Mr. Robeau, one of the victims, said her father, a truck driver, was a “fun-loving man. Hard-working man. Dedicated to his family. Didn’t do anything wrong.”

She added that she was thankful to the authorities who tracked down Mr. Barrette. “I did think they did a good job at apprehending the suspect and getting him as fast as they did,” she said.

Metairie, which sits on the northeastern edge of Jefferson Parish, is about 15 minutes from downtown New Orleans.

“It basically serves as a business district,” Terrie Birkel, the vice president of the Jefferson Convention and Visitors Bureau, said in an interview on Wednesday. “A lot of commerce. Many corporations are located within the ZIP code of Metairie.”

Homicides in the Jefferson Parish area are on the decline. There were 44 homicides in 2016, 31 in 2017 and 24 in 2018, according to crime statistics from the sheriff’s office. The most recent data shows there were 12 homicides in the first four months of 2019.

“We’re probably the largest law enforcement agency in Louisiana, and I’ve never seen anything like this,” he said.