Home » Americas » Love or Spycraft: What Landed an American Teacher in a Cuban Prison?

MIAMI — A secret marriage. A cryptic phone call. And then, a flight to Cuba from which Alina López Miyares never returned.

It was months later that her family learned that Ms. López, a dual Cuban and American citizen living in Miami, had gotten entangled in a murky love story steeped in international espionage. Now 62, she is serving a 13-year sentence in a Cuban prison. Her closed trial in a military court lasted a single morning.

To the Cuban government, which made its case in court documents reviewed by The New York Times, she is a traitor and a spy who slipped the names of Cuban operatives to the F.B.I.

To her family and her supporters in the United States, she is a guileless woman who was duped by an old flame — a Cuban diplomat and spy — and misguided by American intelligence agents. She’s been detained since 2017, and they want the U.S. government to help bring her back.

“She’s very trusting, to the point where someone could call it naïve,” said Ms. López’s son, Michael Peralta, a salesman in California. “She’s not a bad person. She always means well. Other people can take advantage of people who are too trusting.”

Ms. López’s lawyer, family and supporters are trying to draw President Biden’s attention to her case, hoping that under his administration, the pronounced hostility that marked U.S.-Cuba relations during the Trump years will fade and lead to an opportunity to discuss her case.

“I really, really want to go home,” Ms. López says in an audio message that she recorded for President Biden shortly after he took office, and that was made public by her lawyer in the United States, Jason I. Poblete. “I’ve lost my job. I’ve lost everything.”

Her cause has also been taken up by the James W. Foley Legacy Foundation, a group that lobbies for people kidnapped or unlawfully held abroad. Still, the Biden administration is on record saying that repairing relations with Cuba is not high on its agenda.

As in the best spy stories, big questions remain: How much did she know about the web of espionage that entangled her? Where were her loyalties?

Ms. López’s story began like that of many Cuban-Americans: Her family fled Fidel Castro’s revolution for the United States in 1966. They built a life in New Jersey, where she grew up and became a pianist and a teacher, following in her mother’s footsteps.

Then, as a young woman in her 20s, she went to a party and met Félix M. Milanés Fajardo, a Cuban diplomat assigned to the United Nations.

“She fell in love, I imagine,” said her mother, Alina Miyares, a retired New York City schoolteacher who lives in Miami Beach. 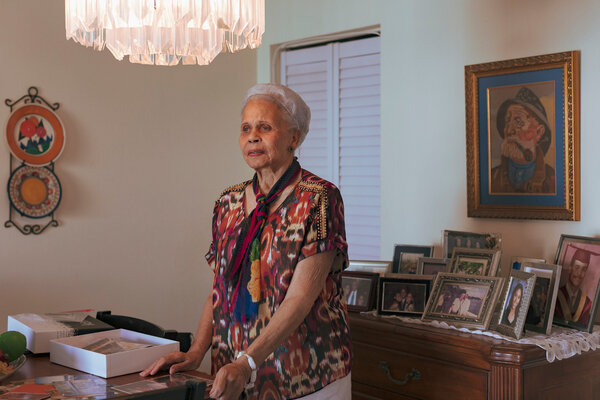 Although her family is fuzzy on the dates, Cuban government documents say that by the mid-1990s, the couple had gone their separate ways. The diplomat went back to Cuba, and Ms. López followed her mother to Miami, where she worked as a bilingual education teacher and pursued a doctorate at Nova Southeastern University. She married and divorced twice, and raised a son from her first marriage.

Years later, she reconnected with her old boyfriend, the Cuban diplomat, and in 2007, without telling her family, she married him. Her son, Mr. Peralta, learned of the wedding six months after the fact.

It is unclear what Ms. López — by then a special-education teacher who specialized in working with homebound children — knew about her husband, and when she learned it.

Her family believes that Ms. López fell for an old love and was taken in by him.

James Cason, a former top U.S. official in Cuba, said most Cuban diplomats are known to be spies for their government, particularly those posted in the United States.

Cuban court documents are unequivocal: Mr. Milanés had been a Cuban intelligence agent. And, the court records say, he confessed that to her after they married on Christmas Eve 2007.

By that time, Mr. Milanés lived in Cuba. He was not allowed to leave the island, so his wife spent the next decade visiting him during long weekends and school breaks. According to Cuban court records, Mr. Milanés was an alcoholic who depended on her financially.

In January 2017, Ms. López received a cryptic call from her husband, asking her to come to Cuba, her lawyer, Mr. Poblete, said.

Mr. Milanés had been caught on a boat in Baracoa, on the eastern coast, trying to flee Cuba, according to a person familiar with the case who was not authorized to speak publicly about it. He had called his wife from custody, luring her to the island.

Ms. López flew to Havana and was arrested in the airport, on her way back.

“I don’t care if he had a gun to his head,” Mr. Peralta said of her husband. “That’s your wife. What kind of man are you to throw your wife under the bus?”

It was months before her friends and relatives in Miami learned that she had been accused of espionage. Cuba, like many nations, considers people born there to be citizens, even if they also have another passport. So Ms. López was denied U.S. consular assistance by the Cuban government.

“For about six months, nobody would tell us why she was detained, nobody let us speak to her, nobody gave us any information,” Mr. Peralta said. “I would call the embassy in Cuba almost on a daily basis.”

“She said, ‘My lawyer told me that if I cooperated, I would get less prison time and be done with this,’” Mr. Hernández said.

Guided by the lawyer with the Cuban state, Ms. López told interrogators that the F.B.I. had approached her in Miami, saying they knew she was married to a former Cuban intelligence agent. The American agents offered help getting her husband, and the daughter he had in Cuba, out of island in exchange for information, she told the Cubans, according to court documents.

Once Ms. López told her husband of the F.B.I.’s offer, he decided to cooperate with the Americans, she said. Through his wife, he gave them cover names of Cuban agents in the United States and details of some of his missions, the records allege.

On the Cuban state lawyer’s advice, Ms. López called her mother in Miami, asked her to pick up three datebooks in her apartment, and bring them to the island, her current lawyer in Cuba said. The military used the documents to build the case against her, according to Cuban court records and to Mr. Hernández.

One of the books contained names of Cuban intelligence duty officers as well as three active and three retired Cuban agents, the Cuban court records said; another datebook had the names and phone numbers of American special agents “known to Ms. López.”

Ms. López received two payments — $400 to cover expenses, and $10,000 to help Mr. Milanés pay for a smuggler and escape the island, according to the court documents.

After a brief closed trial in Havana in October 2017, Mr. Milanés was sentenced to 16 years in prison and Ms. López to 13 years.

Margaux Ewen, executive director of the Foley Foundation, said people arrested abroad can be considered “wrongfully detained” if there is no due process in that country and if the country is holding them for political leverage. The group has added Ms. López to its list of 48 Americans who are captive or wrongfully detained in other countries.

The case got little traction in the Trump administration, but the Office of the Special Presidential Envoy for Hostage Affairs is now reviewing Ms. López’s claim, said Mr. Poblete, who has helped free Americans unlawfully detained in Iran and Venezuela.

The envoy’s office referred questions about Ms. López’s case to the Bureau of Consular Affairs, which declined to comment. A spokeswoman for the State Department also declined to comment, saying only that it had “no greater responsibility than the protection of U.S. citizens overseas.”

The F.B.I. declined repeated requests for comment, and a spokesman for the Cuban government in New York did not respond to a request for comment.

Ms. López has renal insufficiency and other serious health problems, and has lost weight, Mr. Poblete said. Initially held in prisons, she has been transferred to camp-like facilities where she works as a teacher. Fellow inmates call her “la Americana,” he said.

He lamented the lack of attention the case has received, despite the efforts of her mother, Ms. Miyares.

“She is a testament to a mother’s love and somebody who has been there for her daughter,” Mr. Poblete said. “When everybody seems to have given up, this woman, she has not.”

Ms. Miyares, 93, is still doing all she can for her daughter, approaching members of Congress and advocacy organizations in the United States for help. She traveled to Cuba every month to bring Ms. López medicine and food, until the coronavirus put a stop to her visits.

“I walked all of Miami looking for support and there was none,” Ms. Miyares said. “Not one single person from the government or politician helped me with my daughter. Nobody. I have nowhere else to go.”

Commuter Misery After Most Ferries to N.Y. Pulled Over Safety Issues