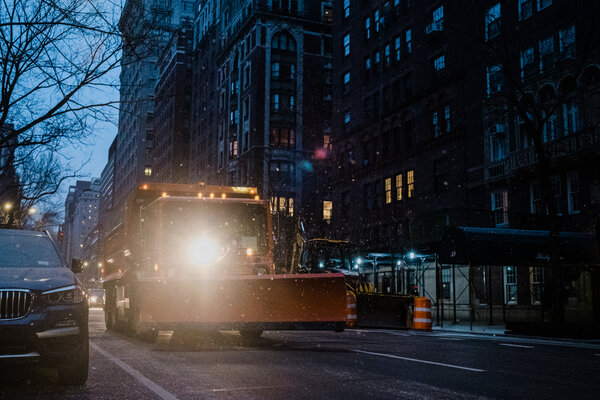 Schools are closed for in-person learning. Coronavirus vaccination appointments are postponed. Outdoor dining is on pause. Utilities warn of power outages, as crews race to keep ice off roads and subway rails.

A major snowstorm is bearing down on New York City today, threatening to drop 18 inches of snow by tomorrow morning, according to the National Weather Service. The forecast has prompted dire warnings from public officials across the city and state, advising that people stay inside and avoid travel today.

On Sunday evening, Mayor Bill de Blasio issued a local emergency declaration, barring most travel in the city starting at 6 a.m. on Monday except in cases of emergencies. The restrictions do not apply to police officers, health care workers, grocery store employees and several other groups.

“This is not a storm to underestimate,” Mr. de Blasio said. “Take it seriously. This is a dangerous storm.”

[Get the latest storm updates here.]

By Monday morning, four to five inches of snow may have already fallen, snarling the morning commute. But things are expected to get much worse throughout the day.

The Weather Service is estimating that one to three inches of snow per hour could fall in the afternoon.

Winds are expected to pick up speed, and gusts could reach 50 miles per hour. That could create “blizzard-like” conditions, said Deanne Criswell, the city’s emergency management commissioner.

Officials and utilities are warning of falling trees and widespread power outages.

Metropolitan Transportation Authority crews have been working to keep bus and rail service running, racing to keep ice off subway rails and rig buses with chains. Bus service would be reduced and aboveground subway service would be suspended if the snowfall was severe enough, the M.T.A. said.

New Jersey Transit is suspending service today. The Long Island Railroad, which planned to operate on a reduced schedule through Tuesday night, could also be suspended. Service on Metro North is expected to end early. Bus service in and out of the Port Authority Bus Terminal will be suspended today.

Mr. de Blasio said on Sunday that vaccine appointments scheduled for Monday would be postponed because he did not want New Yorkers traveling. He said appointments on Tuesday could be affected, too.

Who’s the Front-Runner? 5 Takeaways From the First Mayoral Debate

Wall Street Makes Unprecedented Push to Get Out the Vote

Napoleon’s Brother Lived in N.J. Here’s What Happened to the Estate.

Why Some Suburban Businesses Are Thriving During the Pandemic

A 95-year-old woman and her 64-year-old son were found dead inside their luxury apartment in Chelsea. [Daily News]

A 28-year-old Bronx man faces murder charges after, according to the police, he admitted to setting a homeless man on fire over a stolen scooter. [N.Y. Post]

Six people were injured when a car crashed into a Metropolitan Transportation Authority bus in Brooklyn. [amNY]

And finally: The Floral Heart Project

The first time Kristina Libby, an artist based in Greenwich Village, left a gigantic floral garland at Brooklyn Bridge Park, it was an intimate way to offer condolences to New York City when the pandemic reached a peak last spring. Soon after, people wanted to participate.

Her floral heart garlands to honor those affected by the coronavirus then popped up on street corners, bridge walkways and park lawns, and became a meeting point for vigils, performances and open mics where people who lost a loved one shared their stories.

Ms. Libby’s effort came to be known as the Floral Heart Project. In partnership with 1-800-Flowers.com, the garlands have now appeared in over a dozen locations, including Central Park, Carroll Gardens, Rockaway Beach, Long Island City and Jersey City, N.J. Each display is up for three to seven days.

Ms. Libby also created a digital installation, “Heartbleed,” that is on view at SpreadLightNYC, a public art exhibit in TriBeCa, until Feb. 28. In it, a 10-minute video displayed in a window illustrates an accumulation of rose petals, each one representing a life lost to Covid-19 in the United States.

Ms. Libby said she wanted to produce simple artwork that could resonate with all New Yorkers.

“It made sense to use flowers,” she said. “They’re a traditional sympathy gift, and a heart was a very easy symbol for the message I was trying to convey.”

With the pandemic nearing a year in duration, Ms. Libby does not see an end for her floral project. “Grief is a massive burden that I believe will deeply harm our country if we do not help people to heal from it,” she said.

Many years ago, when my children were little, my friends and I shopped at Natan Borlam’s children’s clothing store in Brooklyn.

The store carried beautiful clothes from Europe, as well as Florence Eiseman dresses for girls and Merry Mites and Gay Sprites clothes for toddlers, all at a fraction of their retail cost.

There were no price tags. You selected what you wanted and got in line. Natan would then look everything over and give you a final price. It was strictly cash only.

One day, there was a woman in line ahead of me whose arms were overflowing with clothes.

“I only have $42 with me,” she said to Natan when it was her turn at the register. “So please add it up and tell me what it costs before you ring it up.”

He took the items from her one by one, folding each neatly and piling them on the counter.