One winter night in 1978, a 14-year-old boy named Jeffrey Batan was killed in Rego Park, Queens. His body was found with 20 stab wounds in a snowy yard the next morning. Though the violent crime received media attention, it was never solved.

Yet as the years passed, the boy’s older sister, Martina Batan, continued searching for answers to the cold case. That quest would go on to shape her life.

“I was woken up by the doorbell, and it was a reporter from The Daily News,” Ms. Batan recalled in a 2015 documentary about her search, “Missing People,” “and he asked me if I knew Jeffrey Batan. I said, ‘He’s my brother.’ And at some point in the first few sentences the reporter realized that I didn’t know.”

“Nobody was ever arrested,” she added. “The case is technically still open. It destroyed all of us.”

Ms. Batan became a prominent contemporary art dealer in Manhattan, representing artists like Joseph Beuys and Chris Burden and selling the works of Andy Warhol and the photographer William Wegman. But well into her 50s, she kept looking for clues in her brother’s murder.

Ms. Batan died on March 26 at a hospital in the Bronx. She was 62. Her sister, Christi Saporito, said the cause was a series of strokes.

Ms. Batan’s family life was shattered after Jeffrey’s murder, and she left Queens to become an artist in Manhattan. She immersed herself in the city’s punk scene, always wearing black, working for Punk magazine and moshing at CBGB. An underground comic drawn by Peter Bagge, “Martini Baton!,” was inspired by her downtown persona. 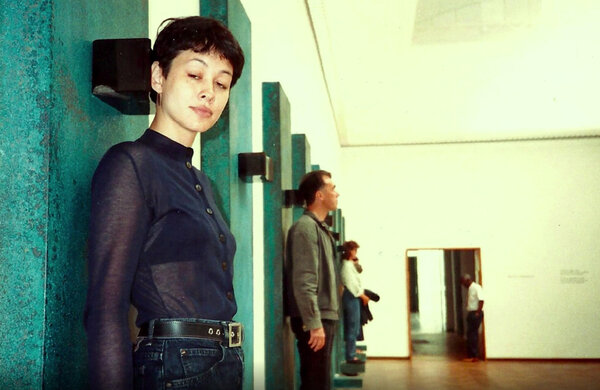 Ms. Batan worked for the influential SoHo gallery Ronald Feldman Fine Arts for 35 years, eventually becoming its director. She dealt with artists like Hannah Wilke and Leon Golub, and she acquired pieces from Ana Mendieta, Louise Bourgeois and James Castle. After Warhol died in 1987, Ms. Batan assisted in the gallery’s rise as a dominant player in the market for his art.

But the scarring trauma from her youth was never far from her mind. Ms. Batan struggled with chronic insomnia, a condition that began immediately after her brother’s death, and she underwent years of therapy. When she thought about her brother, she sometimes fell into depressive spirals that lasted weeks.

To endure the sleepless nights in her Midtown apartment, Ms. Batan tinkered with a sculpture built from Legos in her living room, stacking pieces onto it until the morning. “I can stay up until 4 working on this Lego cube,” she said, “and slowly watch the sky become brighter.”

When she was 53, Ms. Batan decided to kick up the dust of her past and hired a private detective to look into the 1978 murder case. The events that transpired were documented in “Missing People,” directed by David Shapiro, who followed Ms. Batan for four years. The investigation uncovered vital new information about the murder, but it also added to her despair.

The detective discovered that five years after Jeffrey’s death, an 11-year-old boy was killed by a man in College Point, Queens, and that the man had once lived in Rego Park. The killer, who was convicted of the boy’s murder, was briefly a suspect in the 1978 case, and he stated in police reports at the time that he had known Jeffrey. For reasons that are unclear, the documentary recounts, investigators apparently missed these connections, and Ms. Batan became aware of them only during the private investigation. She became convinced that this man was her brother’s killer. The detective also learned that Jeffrey had been raped.

“Why did I do this?” Ms. Batan said in the documentary. “Why did I reopen things that had been put aside in 1978? I was expecting the block that my brother’s death has put in my life, I was expecting it to be coherent somehow.”

As her feelings grew more intense, so did another obsession.

After Hurricane Katrina, she traveled to New Orleans to help with animal-rescue efforts and came across the work of a local outsider artist named Roy Ferdinand. Mr. Ferdinand, who had died two years earlier, documented crime and poverty in the city’s Lower Ninth Ward, drawing graphic scenes of gang violence that he had witnessed firsthand.

In one of his paintings, a beheaded man sits propped against a brick building; in another, a gambler draws a gun to shoot another player at the card table. Mesmerized by his work, Ms. Batan began buying it, amassing a vast collection in addition to some of his personal possessions, like a cowboy hat and boots.

A few years later, Ms. Batan met with Mr. Ferdinand’s sisters, Faye Powell and Michele Ferdinand, to learn more about his life. She began asking intimate questions. In a tense scene in the documentary, Faye confronts her.

“I just really have to know what exactly it is that’s driving you and why?” she says.

“I don’t know why I find beauty in the crimes that he’s depicting,” she finally says. “The loss that I feel about my brother, that I’ve carried along with me, it’s time to bury that. So the idea of brothers and sisters remembering brothers. This wasn’t anything I planned.”

“I really hope this helps drive you to the destination you’re trying to reach,” she says.

Martina Beth Batan was born on Dec. 25, 1958, in Connecticut and grew up in Middle Village, Queens. Her father, Federico Batan, was a physician who was born in the Philippines. Her mother, Barbara (Nelson) Batan, was a nurse and social worker.

As a teenager, Martina stood out in her middle-class Queens neighborhood, listening to punk rock and heading into the city any chance she could get. In the late 1970s, she studied photography at the School of Visual Arts in Manhattan, where she produced a series of dark and obscure prints utilizing pictures of her childhood. She started working for Ronald Feldman Fine Arts in 1978 and became its director in the late ’80s.

In addition to her sister, Ms. Batan is survived by a brother, Timothy Batan, and her stepfather, Kevin Brennan. She was married and divorced twice.

In 2012, Ms. Batan suffered a stroke that slurred her speech and affected control of her body. It was the first of multiple strokes that left her hospitalized and in rehabilitation facilities for years. Before her health deteriorated, Ms. Batan hoped to use the information she had uncovered about her brother’s murder to reopen the 1978 case.

After the private investigation ended, Ms. Batan visited the small yard in Queens where her brother’s body had been found. She trudged across autumn leaves and stopped at a children’s swing set. Then she closed her eyes.

“I’m starting to feel his presence,” she said. “I feel close to him in a way that I haven’t for a long time.”

'He was not on our radar': Authorities search for motive in Nashville blast