About a decade ago, Tina Johnson of Princess Anne, Md., was taking a college course on the history of her state when she came across a familiar name.

A passage in her textbook said that a young man named George Armwood was the last Black person to be lynched in Maryland. In class, Ms. Johnson raised her hand. “That’s my cousin,” she recalled saying to the professor.

Ms. Johnson, now 35, had heard about Mr. Armwood once before: She was a child when her grandmother Mary Braxton told her about the day he was accused of attacking a white woman in 1933.

Ms. Braxton, who was Mr. Armwood’s first cousin, told Ms. Johnson that he had asserted his innocence and tried desperately to hide from the police. He was ultimately taken to a jail in Princess Anne, where a lynch mob found him.

“He was beaten, stabbed, and kicked, before he was tied to the back of a truck and driven to the place he would be hanged,” according to a state history archive.

Now, 88 years later, Mr. Armwood has been formally pardoned — along with 33 other Black men and boys who were lynched in Maryland between 1854 and 1933.

“My hope is that this action will at least in some way help to right these horrific wrongs,” Gov. Larry Hogan, a Republican, said in a statement, “and perhaps bring a measure of peace to the memories of these individuals, and to their descendants and loved ones.”

Mr. Hogan announced the pardons at a news conference Saturday in Towson, Md., where a plaque was erected in memory of another lynching victim, Howard Cooper, who was 15 when he was accused of sexually assaulting a white girl in 1885.

After Howard was convicted by an all-white jury, his lawyers intended to appeal his case to the United States Supreme Court, according to the state archive. Instead, a lynch mob broke into the jail, dragged him from his cell and hanged him from a tree.

Last year, eighth graders at Loch Raven Technical Academy in Towson took an interest in Howard Cooper while taking a class on juvenile justice. They learned that he had been a teenager, like them.

“When they were presented with Howard’s story, they really saw it as a way to make a change and to use their voice,” said Michelle St. Pierre, who teaches the course. She said the students had been working on a petition for a pardon when the pandemic interrupted them. On Saturday, Mr. Hogan said their work had inspired him to act.

“I was just pleased that he heard my students’ voice,” Ms. St. Pierre said. “They wanted it to be on record that this case was unjust.” 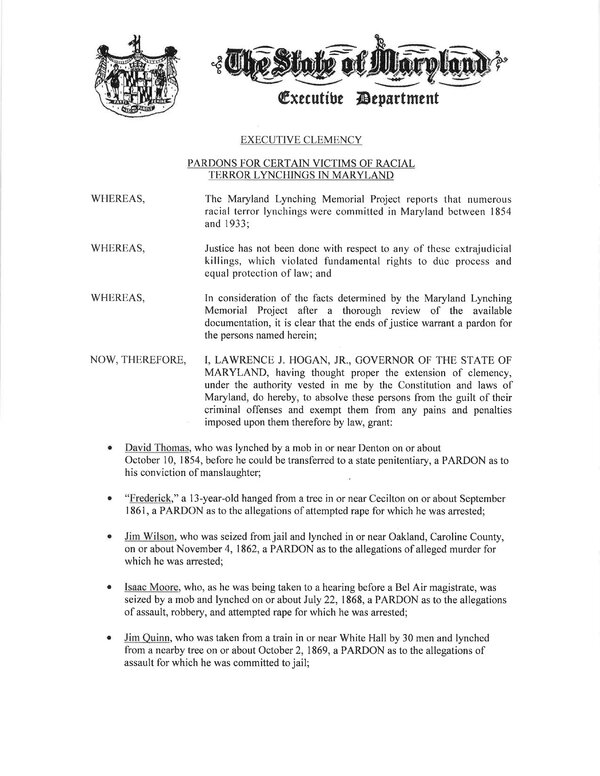 The pardons were also prompted by the Maryland Lynching Memorial Project, a nonprofit group that has been working to bring the stories of lynching victims to light. Will Schwarz, the president of the organization, wrote a letter to Mr. Hogan in February urging him to posthumously pardon Howard Cooper.

“It’s a step toward changing the narrative and correcting the history that has been misrepresented for so long,” Mr. Schwarz said in an interview. “I hope it helps people understand how that original sin continues to degrade all our lives.”

Ms. Schwarz said his work was inspired by the Equal Justice Initiative, a nonprofit legal advocacy group that has documented more than 4,000 racial terror lynchings in the United States between 1877 and 1950.

The extrajudicial killings were instruments of terror, often conducted as public spectacles in full view of, or with cooperation from, law enforcement. Many of these were documented by Ida B. Wells, a Black journalist who risked her own safety to investigate lynchings in the era of Jim Crow.

In 2019, Maryland launched a truth and reconciliation committee to research lynchings in the state, of which there were at least 40. The 34 men and boys who were pardoned on Saturday had been arrested, charged or jailed before they were killed.

They included James Carroll, who was abducted from a train and hanged from a tree in Point of Rocks, Md., in 1879; George Briscoe, who was being taken to a jail in Annapolis when he was lynched in 1884; William Andrews, who was seized by a mob immediately after his trial in Princess Anne in 1897; and Mr. Armwood, who tried in vain to hide under a mattress when a lynch mob burst into his jail cell in 1933.

As far as Ms. Johnson could recall, her grandmother Ms. Braxton, who died in 2011, mentioned Mr. Armwood only once. “I remember that one teardrop that fell from her eye,” Ms. Johnson said.

Ever since she came across his name in college, Ms. Johnson has been working to discover more about Mr. Armwood’s life. He was known for his constant whistling and singing, she said. He had a soft spot for the gospel song “His Eye Is on the Sparrow.”

Ms. Johnson said it was important to acknowledge the history of lynchings in the United States. “The past becomes the present very easily,” she said, pointing to recent police killings of Black people. “And that means that the past stories are still relevant.”

She added that the vast majority of people who perpetrated lynchings in the United States were not held accountable, while families of the victims were left to deal with grievous losses.

“Now he’s been pardoned,” Ms. Johnson said of Mr. Armwood. “But what kind of restitution was there?”

HIV data leak: Farrera-Brochez tells US court he has complied with order to delete stolen data

Jacob Blake pleads not guilty to charges prior to Kenosha shooting