Home » Americas » Mass rape charges to be dropped against US couple 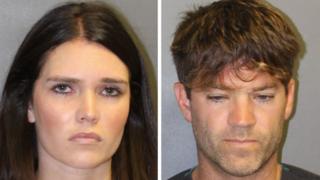 Charges against a California couple accused of sexually assaulting “hundreds” of women will be dropped due to lack of evidence, officials said.

Orange County District Attorney Todd Spitzer accused his predecessor of mishandling the case and using it to aid his re-election bid.

In 2018, prosecutors said they found proof that Grant Robicheaux and Cerissa Riley drugged and raped victims.

He accused his predecessor of misleading the public, as a review of the case found “not a single video or photograph” depicting assault, as Tony Rackauckas, the former district attorney, had claimed.

The couple had denied the charges against them.

Mr Rackauckas, alleged the couple “used their good looks and charm” to lure and drug victims. He brought charges on behalf of seven unnamed women who said they were assaulted by Dr Robicheaux, 39, and Ms Riley, 32.

He said investigators had found “thousands” of videos and images on their mobile phones that showed vulnerable women “barely responsive to the defendants’ sexual advances”, and stated that hundreds more women could have been assaulted.

However, Mr Rackauckas admitted in a deposition last summer that he used the case to garner media attention and help his re-election effort, according to the statement from the district attorney’s office. He lost his re-election bid in November 2018.

Mr Spitzer will open an internal investigation to review Mr Rackauckas’ handling of the case, US media report.

On Tuesday, Mr Rackauckas defended his handling of the case, saying he felt for “the women who had the courage to come forward”.

“Any prosecutor should think long and hard before dismissing such a case where multiple women have independently come forward and subjected themselves to the hard process of baring their souls to the authorities,” he told local media.

“I just hope they’re not being sold down the river for some twisted political motive.”

Dr Robicheaux is a well-known orthopaedic surgeon and once appeared on the cable reality TV show Online Dating Rituals of the American Male.

He and Ms Riley were arrested in September 2018 when two women accused the couple of rape and sexual assault after meeting them at a bar and a restaurant in Newport Beach, 45 miles (72km) south of Los Angeles.

As more accusers came forth following media coverage, Dr Robicheaux was charged with 17 felonies, and Ms Riley with 13, both including drug rape and assault charges. They faced a maximum of 40 and 30 years in prison respectively.

The couple had pleaded not guilty to all counts. Their lawyers said Mr Rackauckas’ statements to media “set off a frenzy that completely destroyed the integrity” of the case and damaged the couple’s chance at a fair trial.

All Washington D.C. public employees will face a vaccine or testing requirement.