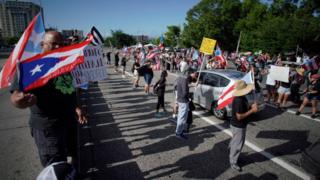 Thousands of people have taken to the streets in Puerto Rico to demand the resignation of the island’s embattled governor, Ricardo Rosselló.

It comes a day after Mr Rosselló said he would not step down over a leaked online chat in which he and top aides exchanged obscenity-laced messages.

The texts included homophobic slurs as well as insults about victims of the deadly Hurricane Maria in 2017.

Monday’s protest is forecast to be the largest in the US territory’s history.

Footage early on Monday morning showed crowded trains headed to the capital, and long lines of protesters preparing to march in the sweltering Caribbean heat.

Some protesters were seen blocking highways while chanting “Ricky resign”. The hashtags #RickyRenuncia (“Ricky resign”) and #ParoNacional (national strike) both trended on Twitter on Monday.

Experts predict the crowd size will eclipse the the largest protest in the island’s history 15 years ago, when Puerto Ricans successfully petitioned the US military to end training missions on the island of Vieques.

What are the secret messages?

The chat, which contained 880 pages between the governor and 11 all-male allies, was leaked on 13 July and has led to days of protests outside the governor’s mansion in San Juan.

Several of the texts mock victim’s of Hurricane Maria, which devastated the island in 2017, and may have lead to more than 4,000 deaths.

In one instance, Mr Rosselló cricitised the former speaker of the New York City Council, Melissa Mark-Viverito, saying people should “beat up that whore”.

When the nation’s chief fiscal office wrote that he was “salivating to shoot” the mayor of San Juan, Mr Rosselló replied: “You’d be doing me a grand favour.” 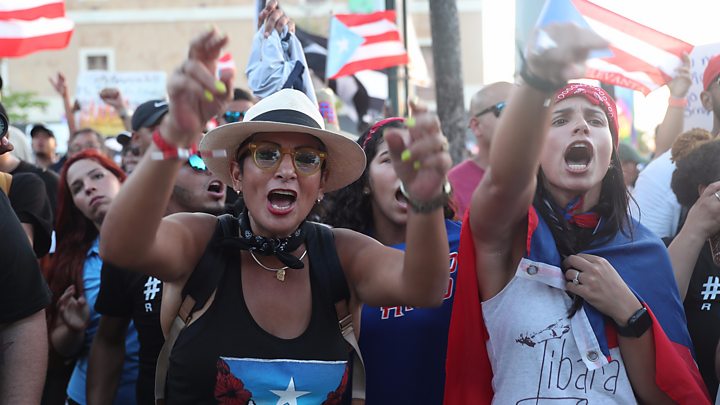 What has the governor said?

On Sunday, the 40-year-old governor refused to resign but said he would step down as leader of the New Progressive Party, a Puerto Rican political party which advocates for US statehood.

In an attempt to appease protesters, he said he would not seek re-election.

“I hear you,” Mr Rosselló said in a Facebook video. “I have made mistakes and I have apologised.”

“I know that apologising is not enough,” he said.

“A significant sector of the population has been protesting for days. I’m aware of the dissatisfaction and discomfort they feel. Only my work will help restore the trust of these sectors.”

What has reaction been?

“Puerto Rico has spoken up, not only as a strong, broad and united voice but as the right voice,” the editorial said. “With a gesture of nobility and humility, Governor, it is time to listen to the people. You have to resign.”

San Juan Mayor Carmen Yulin Cruz said in a Twitter message on Monday: “They can’t deny it: The power is in the street.”

Singer Ricky Martin, who was targeted in the secret messages, was among those calling for he governor to resign, as well as Hamilton creator Lin-Manuel Miranda and reggaeton star Bad Bunny.

A virus to kill populism, or make it stronger