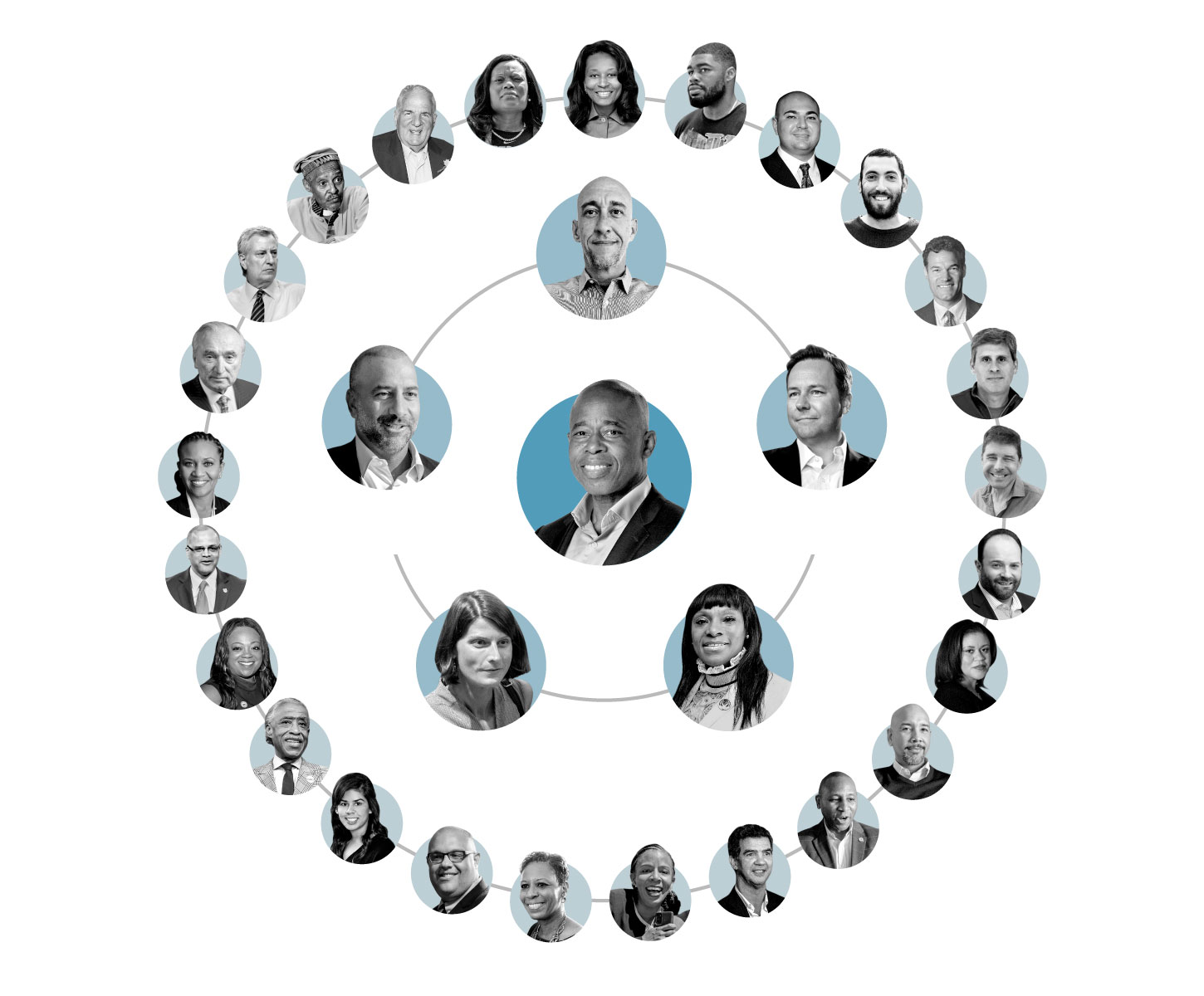 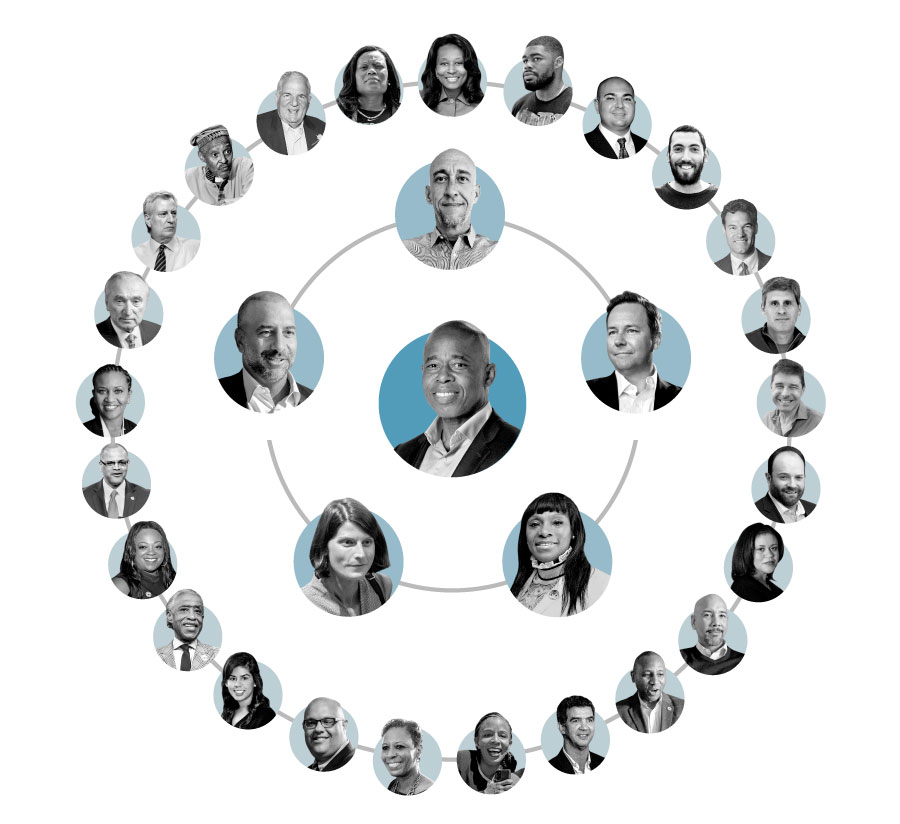 More than a decade ago, when Eric Adams was a New York state senator, he met with three key advisers at Balboa, a restaurant in Brooklyn, to plot his political future.

Over plates of Caribbean food, Mr. Adams and his associates charted a path designed to take him to City Hall.

Mr. Adams began to set up “mayor classes” — meeting with dozens of local government veterans to learn about the major issues facing the city — and was twice elected as Brooklyn borough president before winning the Democratic primary for mayor in June. In overwhelmingly Democratic New York, he is the heavy favorite to win in the general election in November.

As Mr. Adams, 60, begins formulating what lies ahead for him and the city, he will be relying on these advisers, as well as new allies who supported him over the last year as he built a winning coalition of unions and Black and Latino voters outside Manhattan.

Here is a guide to the allies who could help shape his administration and his agenda.

Mr. Smith is a founding partner of Red Horse Strategies, a consulting firm. He and the firm have worked on behalf of prominent members of Congress, including Representatives Grace Meng and Gregory Meeks, and he has assisted Mr. de Blasio’s initiatives. Mr. Smith also has experience in labor politics. He is one of Mr. Adams’s most trusted political advisers.

Mr. Thies helped Mr. Adams craft a campaign message that focused on his personal narrative. He is a founder of Pythia Public Affairs, a communications firm, and has worked for elected officials including Gov. Andrew M. Cuomo on his 2006 attorney general race, and businesses that include Lime, the scooter company. Mr. Thies also helped shape Mr. Adams’s policy platform.

Ms. Lewis-Martin has worked with Mr. Adams for years, including as his chief of staff when he was a state senator, and now as his deputy in Brooklyn Borough Hall. She is regarded in some corners as fiercely protective of that relationship and of her role in Mr. Adams’s world — a dynamic that can at times cause friction, according to some who have dealt with her. But she is seen as having Mr. Adams’s ear and is likely to join his administration.

Ms. Moore was the political director of the Hotel Trades Council, a powerful union that represents hotel workers and whose endorsement was critical for Mr. Adams. Mr. Adams respects her political savvy and calm demeanor, and she could join him at City Hall.

Mr. Carone, a longtime counsel to the Brooklyn Democratic Party with a reputation as an old-school power broker, has been an ally of Mr. de Blasio’s. He is politically influential, though some of his dealings over the years have drawn scrutiny. He has been a key donor, adviser and friend to Mr. Adams — Mr. Adams has worked out of office space belonging to Mr. Carone’s firm, an arrangement that Mr. Adams had to account for during the campaign.

A former school principal, Ms. Collins is a high-ranking official at the city’s Department of Education. Ms. Collins, who co-owns an apartment in Fort Lee, N.J., with Mr. Adams, has not appeared with him on the campaign trail and is unlikely to join him at Gracie Mansion if he is elected. But she is his most important adviser on schools, and Mr. Adams published a book last year about their plant-based diet.

Mr. Adams is close with his 25-year-old son. Mr. Coleman has lived at times with his father in Brooklyn, where he studied for a master’s degree at Brooklyn College. Mr. Adams asks his son for advice about what is important to younger New Yorkers.

Mr. Pitta, a lawyer for the Adams campaign, is a partner at the law firm Pitta LLP and works for a lobbying firm that has lobbied Mr. Adams on behalf of clients — an arrangement that has been criticized by government watchdogs.

A partner at Red Horse Strategies with roots in New York politics, Mr. Rey advised Mr. Adams and was well regarded — even by rival campaigns — as a numbers expert, with a background in political targeting and strategy.

Mr. Shapiro, a New York City consultant with a background in research, advised Mr. Adams and was a vocal defender of his candidacy. He also helped the candidate forge relationships with important constituencies, including with Orthodox Jewish leaders.

Tiffany Raspberry, a lobbyist, is a friend and adviser. She founded York Group Associates, a lobbying firm, and is part of a collective of Black women in politics from Brooklyn who call themselves the Olori Sisterhood.

Ydanis Rodriguez and Laurie A. Cumbo, City Council members who were early endorsers, campaigned with Mr. Adams and criticized his rivals at times. Both could serve in an Adams administration. Mr. Adams is also aligned with Adrienne Adams of Queens and Justin Brannan of Brooklyn, both of whom endorsed him in the primary. Mr. Adams could support one of them to become the next Council speaker.

Pragya Nandini, Mr. Adams’s deputy campaign manager, advised him on policy and helped Mr. Thies create a 100-point plan for improving the city. A former Deloitte consultant, she is relatively new to politics.

The Rev. Al Sharpton and Mr. Adams have known each other for decades and worked together on such issues as opposing the Police Department’s reliance on stop-and-frisk tactics. Although Mr. Sharpton did not endorse Mr. Adams in the Democratic primary, he spoke highly of him and did not endorse another candidate. His daughter, Ashley Sharpton, endorsed Mr. Adams and was an enthusiastic supporter, expressing outrage when two rivals campaigned together.

Sheena Wright, president of the United Way of New York City, is a powerful leader in the nonprofit world and has worked with Mr. de Blasio and Mr. Cuomo on government initiatives. She is likely to play a key role in an Adams administration.

Bill Bratton, a former police commissioner under Mr. de Blasio and Rudolph W. Giuliani, advises Mr. Adams on policing. Mr. Bratton and Mr. Adams both worked on the transit police force and have made similar comments on national television about balancing public safety and police reform.

Mayor Bill de Blasio privately backed Mr. Adams in the Democratic primary and is expected to serve as an adviser to Mr. Adams if he becomes mayor. The two leaders talk frequently, rose in the same Brooklyn political circles and share many of the same supporters, including unions.

Mr. Adams is close to a number of religious leaders from different backgrounds. The Rev. Dr. Herbert Daughtry, a prominent Black minister and longtime activist, was an early mentor of Mr. Adams’s, encouraging him to join the police force to combat misconduct from within. Mr. Adams also has close ties to a number of leaders in Brooklyn’s Orthodox Jewish community.

Peter Aschkenasy, a restaurateur, was chairman of One Brooklyn Fund, a nonprofit that Mr. Adams used to raise money to promote himself as Brooklyn borough president without the spending limits that city law imposes on political campaigns. Mr. Aschkenasy worked for former Mayor Edward I. Koch.

Rodneyse Bichotte Hermelyn, a state assemblywoman and chair of the Kings County Democratic Party, has worked closely with Mr. Adams in Brooklyn politics and endorsed him.