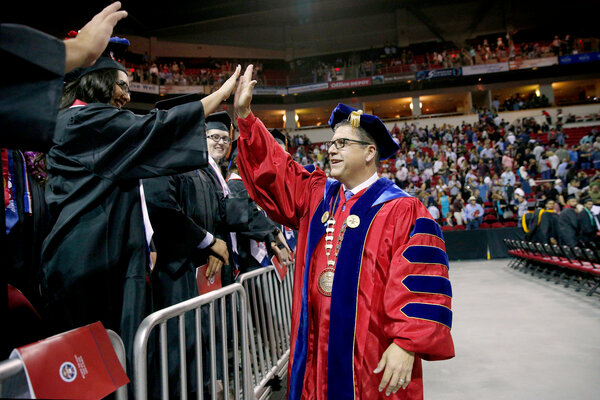 Earlier this week, the California State University announced its next leader: Joseph Castro, who has served as president of Cal State Fresno since 2013.

He’ll be the eighth person to become chancellor of the nation’s largest four-year public university system, but he’ll be the first Californian and the first Mexican-American in the post. He’ll start in the new job on Jan. 4.

In addition to lauding Dr. Castro’s deep experience, many education advocates and other leaders said his perspective would reflect those of the students he serves; 43 percent identified as Hispanic or Latinx, according to data from fall 2019. That’s 207,441 people.

Almost a third of the students are the first in their families to attend college and half of undergraduates receive Pell grants, which help low-income students go to college.

“This is an awful time for everybody, but in particular for young people starting out, especially if they’re poor and first-generation,” Lillian Kimbell, who is chair of the university’s board, told me. “And I think Joe is such a champion of those students.”

Leading a system with 23 campuses across a huge, geographically and demographically diverse state during a pandemic that has upended education is a complex challenge. I talked to Dr. Castro about how he’s approaching it, and what he hopes to accomplish.

Tell me first about what it means to you to become chancellor of one of the nation’s biggest public education institutions.

I’m thrilled to be a chancellor of the C.S.U., especially during this consequential time.

The C.S.U. is the largest. But I think it’s the most important institution in the United States because of the students that we serve. We support students from all different backgrounds to get quality degrees in a timely way and become leaders.

And to be the first Californian to serve as chancellor is very meaningful.

Can you talk about your personal background and how that has shaped your work and how you relate to students?

I was born here in the San Joaquin Valley, not far from Fresno State. I’m the grandson of immigrants from Mexico. They came here about 100 years ago. My great-grandfather helped to build the railroad through the Valley. He brought my great-grandmother and my grandfather, who was about 2 years old at the time, and who helped to raise me.

My grandfather told me all the stories of growing up and how for several of his early years, they lived in tents along the railroad. And that was how my family started in Hanford.

I’m the son of a single mother, a beautician, and they all cared about education — my mother and my grandparents — even though they hadn’t gone to college.

I had the opportunity to go to U.C. Berkeley, and that changed my entire life. And for me, that is why I’m in higher education and why I’m serving today.

I feel like I need to pay that gift forward.

What are some of your top priorities?

I’ve worked closely with Chancellor White on Graduation Initiative 2025. It outlines ambitious goals to increase graduation rates and eliminate achievement gaps between groups. So that will continue as forcefully as possible.

Then there’s the health and safety of our communities, especially during the pandemic.

And then I’ve already begun conversations with legislative leaders and the governor about funding for the C.S.U. I want to inspire them to invest as much as possible and to begin to increase the budget over time, then to look for ways to identify new resources from private individuals and businesses through partnerships and foundations, and so forth.

Then I’d also like to inspire the use of technology in the smartest way, most strategic way possible. That would be driven by our students and faculty and staff.

I know the C.S.U. board endorsed Proposition 16, which would repeal the state’s ban on affirmative action. Do you share that view?

I support Proposition 16. I believe that it would be good for the C.S.U. and for California because it will expand opportunities for students, especially from underrepresented backgrounds, and especially now, as we’re talking about racial justice. Black lives matter.

The university plays such an important role in preparing a new generation of leaders who understand that and support that, from all different backgrounds. And that helps make better policy decisions. I think it makes for a more cohesive society as well — more vibrant.

[What to know about the statewide propositions on your ballot.]

The C.S.U. was pretty far out front in deciding to move almost all classes online for the fall semester, and then for spring. Covid seems like it’ll continue to be a huge undertaking for all kinds of institutions. What decisions are you weighing going forward?

I think that our system has made really good decisions based on health expert advice. We have acted early and decisively, and I think that’s helped here. Fresno State: our enrollment is up 6 percent. We have the largest enrollment in our history during Covid.

So I think that planning, for families, is a chance to do what they need to lean into education for the spring. I anticipate based on the conversations I’ve had with the chancellor and the other presidents, that it will look pretty similar to what we’re doing in the fall.

Some campuses, like ours, will have some in-person courses. We have baseline testing and now monthly testing. We use an app for folks to determine if they’re healthy enough to come to campus. We’ll do temperature checking. We use P.P.E. and we have relatively few students in the residential halls.

Those have all been good decisions for Fresno and each campus is having to make those kinds of judgments. We’ve learned a lot and I think we’re getting smarter about these things.

You mentioned technology earlier. Do you envision many of these changes staying in place even after the pandemic?

Yeah, there is a tremendous amount of innovation occurring right now at each campus, and it’s happening under stressful circumstances.

Once we remove the stress of the pandemic, I actually believe we’re going to be in a new place where we’re offering more courses virtually because students will want that and faculty will want to teach the courses that way.

So I don’t see us going backward to where we were in March. I see us going forward to a new place — an exciting place.

A heat dome is projected to build over the West again this weekend, bringing hot, dry and dangerous conditions to Northern California, and it’s not likely to rain in places where it’s desperately needed. [The Washington Post]

The heat wave means that thousands of Pacific Gas and Electric customers could lose electricity this weekend as part of the utility’s public safety power shut-offs. [The Sacramento Bee]

The Pac-12 Conference is joining the other four most powerful leagues in college sports in deciding to play football this fall. That’s a significant reversal. [The New York Times]

I’ll be out on vacation next week, but you’ll be in good hands with Marie and our other colleagues.

I’m wishing you safety, clean air and some time to rest. (To get you started on that front, here’s a soothing video of sea otter moms and rescued pups cuddling at the Monterey Bay Aquarium.)

California Today goes live at 6:30 a.m. Pacific time weekdays. Tell us what you want to see: CAtoday@nytimes.com. Were you forwarded this email? Sign up for California Today here and read every edition online here.

North Korea calls off nuclear talks with US in Sweden

Trump steps up war against TikTok with new executive order

100 years after the anti-Chinese riots in Halifax