Eight members of the Aryan Circle were dealt federal charges linked to the 2016 killing of a fellow gang member. 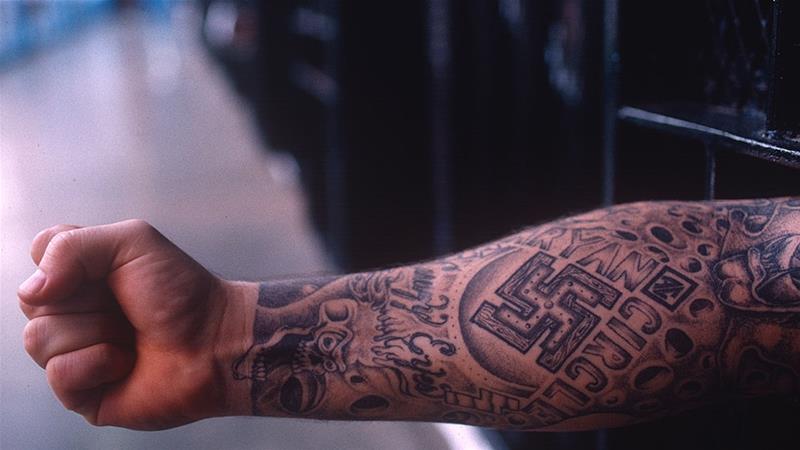 Eight alleged members of a violent white supremacist prison gang have been arrested and indicted on federal charges stemming from a 2016 murder, the US Department of Justice (DOJ) announced on Tuesday.

According to a DOJ statement, 38-year-old Jeremy Jordan was indicted on charges of racketeering murder of Clifton Hallmark, a fellow member of the Aryan Circle who was shot and killed on July 1, 2016.

Although the indictment was filed on December 14, it was sealed until Tuesday, when the court records were made public.

The 12-page indictment alleges that Jordan and seven others killed Hallmark “for the purpose of gaining entrance to and maintaining and increasing position in” the prison gang.

Court records show that Jordan pleaded guilty to the charges and that the DOJ is not seeking the death penalty.

On March 14, a federal grand jury returned a separate superseding indictment that charged the other seven alleged Aryan Circle members with being accessories-after-the-fact in a violent crime over Hallmark’s killing.

That indictment was also unsealed on Tuesday, the DOJ said.

The Aryan Circle is a breakaway from the Aryan Nation, an infamous white supremacist gang operating inside and outside of prisons throughout the country.

“The [Aryan Circle] was relatively small in comparison to other prison-based gangs but grew in stature and influence within [the Texas prison system] in the 1990s, largely through violent conflict with other gangs, white and non-white alike,” the DOJ’s statement continued.

The statement added that the Aryan Circle “enforces its rules and promotes discipline among its members, prospects and associates through murder, attempted murder, assault, robbery and threats against those who violate the rules or pose a threat to the organisation”.

The Anti-Defamation League (ADL) says the group is primarily based in Texas, but has spread to other parts of the country.

By 2009, the Aryan Circle had grown into the second largest prison gang in Texas, according to the ADL. The monitor estimates the prison gang has at least 1,400 members.

Sixteen members of the group were arrested in Midland-Odessa, Texas, in 2008 during a drug raid in which they were found in possession of methamphetamines.

The gang is involved in drug trade and violent criminal activities, as well as hate crimes and the promotion of white supremacist ideology, the ADL profile of the group notes.

“The Circle uses its white supremacy to increase solidarity within its ranks, consciously trying to create the atmosphere of an extended Aryan family or clan to which all are unbendingly loyal,” it explains.

“In and out of prisons, Aryan Circle members have committed a variety of violent acts against African Americans, Hispanics, homosexuals and transgender people, and others.”

Hate groups on the rise

Authorities have investigated another white supremacist prison gang, the 211 Crew, which is believed to have played part in a conspiracy to murder Colorado prison chief Tom Clements five years ago, the Denver Post reported last week.

Texas Rangers and investigators in Colorado believe the group ordered the assassination of Clements, which was carried out by parolee Evan Ebel on March 19, 2013. Yet, they have been unable to build a case so far, authorities told the Denver Post.

Last month, the SPLC announced that the number of hate groups active in the US rose in 2017 for the third consecutive year.

The SPLC identified 954 hate groups in the US last year, an increase from the 917 it had documented in 2016, the group said in a report released at the time.

Neo-Nazi groups, which the year before had numbered 99, saw the largest increase, growing by 22 percent and reaching 121 groups nationwide.

Atomwaffen Division, a neo-Nazi group, was linked to at least five murders in an eight-month period that included parts of 2017 and 2018, as Al Jazeera reported earlier this month.

According to the ADL, Atomwaffen Division’s activities have been documented in Colorado, Florida, Illinois, Pennsylvania, Texas, Massachusetts, Washington, North Carolina and Virginia, among other states.

US teen cleared in protester deaths says self-defence 'not illegal'