Announcement comes as Mexico beefs up security along its southern border in effort to stem the flow of migrants north. 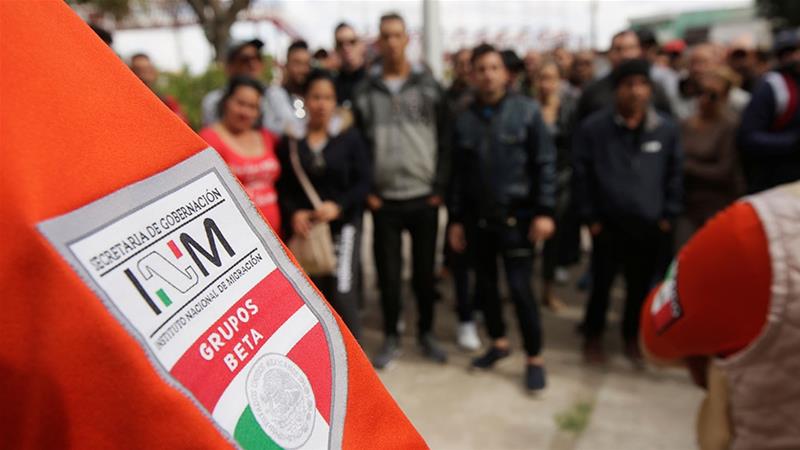 Mexico’s immigration chief presented his resignation to the president on Friday as the country embarks on a crackdown on irregular migration through its territory in response to US pressure.

The National Immigration Institute said in a brief statement that Tonatiuh Guillen thanked President Andres Manuel Lopez Obrador for the opportunity to serve the country, but it did not give a reason for why he is stepping down.

The announcement comes as Mexico beefs up its security at the southern border as part of a recent agreement with the United States to stem the flow of migrants and asylum seekers north after pressure from US President Donald Trump, who had threatened escalating tariffs on Mexican goods if additional steps weren’t taken.

Lopez Obrador said on Friday that officials will tighten security at 68 border crossings where controls are lax.

He made the comments during a morning presser, although there was no visible increase in the number of soldiers and personnel in the border city of Tapachula near Guatemala.

Mexico has promised to deploy 6,000 members of its new, still-forming National Guard to control immigration in its southern border region with Guatemala.

Mexican Foreign Relations Secretary Marcelo Ebrard said on Friday the Guard deployment will be readied by Tuesday, along with 825 immigration agents and 200 officials from the country’s welfare department.

But there has been no sign so far of any National Guard presence in the southern city of Tapachula, near Guatemala. Nor has there been any notable change at the Suchiate border river, where locals and migrants alike commonly cross.

After offering contradictory statements, Mexican officials told Al Jazeera late on Thursday that National Guard does have a presence in the southern border region, but they would not elaborate on where they are located.

Many migrants and asylum seekers in Tapachula have told Al Jazeera that the increased security will not deter others from trekking north.

Most are coming from Central American countries where they are fleeing extreme poverty, unemployment, violence, political persecution.

Police and immigration had already stepped up enforcement in southern Mexico in recent months, setting up highway checkpoints, raiding a recent caravan of mostly Central American migrants and trying to keep people off the northbound train known as “the beast”.

US ‘sending more asylum seekers’ back to Mexico

Mexican and US officials were also meeting on Friday to discuss the controversial programme that allows the US to send some asylum seekers back to Mexico to wait out their US immigration hearings.

Ebrard said officials would discuss which cities the programme, known as Remain in Mexico, would expand to, as well as how to measure the number of people and which nationalities Mexico would accept. He added that Mexico had not agreed to accept an unlimited number of asylum seekers.

“Today, there is a meeting with US authorities, to learn, to discuss the ports of entry and how the number will be measured, because Mexico has not accepted that it be undetermined,” he said in a news conference Friday morning.

Currently, the programme operates in Tijuana, Mexicali and Ciudad Juarez. Close to 12,000 people have been returned to Mexico since January.

Later in the day, a Mexican official told Reuters news agency that the US had increased the return of asylum seekers to Mexico through the El Paso, Texas port of entry to around 200 a day.

The increase from around 100 migrants a day was the first sign of expansion of a Trump administration policy known as the Migrant Protection Protocols, said Luis Carlos Cano, a spokesman for Mexico’s national immigration agency in Ciudad Juarez, across the border from El Paso.

Mexico has also agreed to consider a plan that could make it a “safe third country” in which asylum seekers would have to seek refuge instead of in the US, if Mexico does not bring down immigration flows by mid-July through enforcement measures, officials have said.

Immigration rights groups have slammed to possible “safe third country” agreement, saying that it would endanger asylum seekers by requiring them to make their claims in a country experiencing high levels of violence.

Ebrard also called on the United Nations and the international community to help Mexico with immigration control and the fight against human trafficking.

$200 Million, Jailed Immigrants and a Democratic Bastion Under Fire