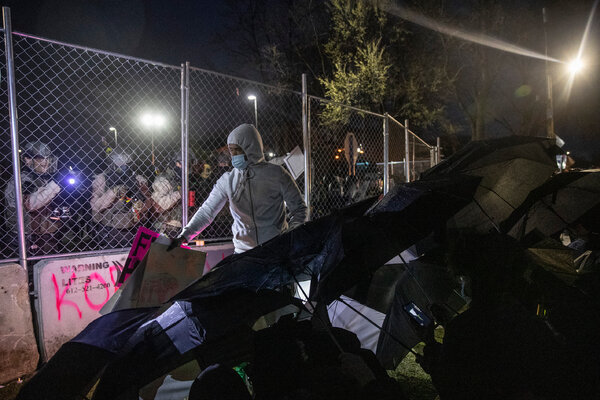 After several nights of protests against a police killing in nearby Brooklyn Center, Minneapolis law enforcement agencies and community groups asked for peace during a news briefing Monday, as the trial against the former police officer Derek Chauvin comes to a close.

Minneapolis has been preparing for eight months for potential unrest following a verdict. More than 3,000 National Guard soldiers and airmen have been deployed in Minneapolis to assist local law enforcement, schools will move to remote learning, and businesses have been boarded up.

Minneapolis Police Chief Medaria Arradondo asked that protesters express themselves peacefully and promised that the police response would be grounded in “de-escalation.” He said law enforcement had listened to feedback over the police response to protests in Brooklyn Center and would adjust their approach.

During those protests, officers deployed rubber bullets and pepper spray, protesters were arrested and journalists were rounded up and ordered to lie on their stomachs until officers could photograph their press credentials. On Friday night, a federal judge granted a temporary restraining order that bars Minnesota state law enforcement officers from arresting or using force against the press, which remains in effect this week.

Chief Arradondo said he wanted to work with the community to keep things peaceful, and that the protests following the police killing of Daunte Wright had sent agencies into crisis mode.

“Operation Safety Net is not about arresting people,” he said. “We want peaceful assembly. We want peaceful protest. We know we have a city that is in mourning, that is in grief. The last thing we want is to turn this into an enforcement situation.”

Minneapolis community leaders, including a representative from the N.A.A.C.P. and other local organizations, joined Mr. Arradondo and other officials at the briefing to call for peaceful protests.

Trahern Pollard, founder of the organization We Push for Peace, said he wanted to protect the community from the property destruction that happened during last year’s protests.

“A lot of our community is dealing with trauma and hurt and pain and frustration,” he said. “It’s important that we figure out another way to channel those emotions versus being destructive.”

Okotoks reopens amid provincial relaunch, Calgarians urged not to visit

Eric Trump conceded that his father ‘lost a fortune,’ but dismissed questions about influence-peddling.