One of New York City’s iconic carriage horses collapsed on the street amid the summer heat – as bystanders watched in horror and animal lovers called for a ban.

Ryder the carriage horse collapsed near the intersection of W 45th St and 9th Ave in Manhattan’s Hells Kitchen neighborhood around 5pm on Wednesday.

According to onlookers, its driver began ‘flogging’ the exhausted horse, trying to get it on its feet and out of traffic.

The New York Police Department’s (NYPD) mounted unit responded to the scene at 5.04pm after a worried onlooker made a 911 call. 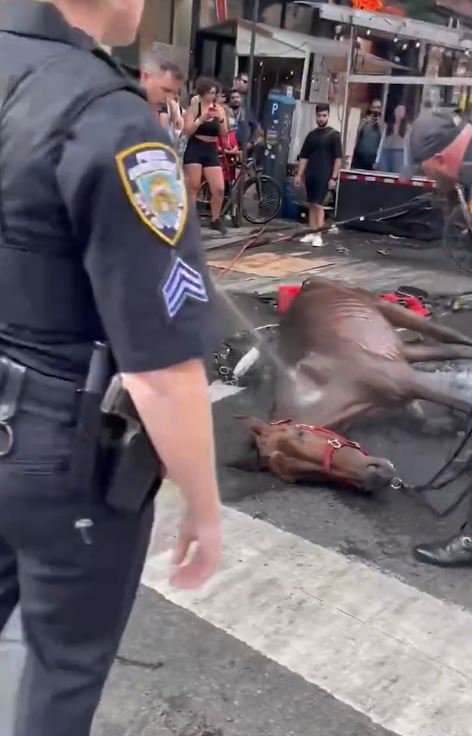 Police arrived to find the horse ‘lying in the middle of the roadway in distress’, the department told Metro.co.uk on Thursday. The mounted unit was able to aid the frightened creature by hosing it down and cooling it off.

One video taken by a bystander shows a crowd cheering and clapping while the horse heroically struggle to its feet. Mounted officers were able to lead the animal into an NYPD horse trailer.

The horse was then transported to a private stable on West 38th St, where police confirmed it was conscious and awaiting veterinary care.

‘The NYPD takes the health and well-being of our four legged friends in New York City very seriously, and are glad that our trained equestrian officers were able to assist,’ a police spokesperson said.

He explained that Ryder was purchased when after he went up for auction earlier this year. He was brought to New York in April.

‘If not for the carriage industry, this horse could have been dead,’ he said.

However one local advocacy group, New Yorkers for Clean, Liveable, and Safe Streets (NYCLASS), is pushing to outlaw the horse-drawn carriages entirely.

NYCLASS is lobbying New York City Council to pass the a bill introduced by Queens City Councilman Robert Holden which would ban the carriages citywide and replace all of them with electric vehicles by 2024.

NYCLASS successfully lobbied the city council to pass the Carriage Horse Heat Relief Bill, which prevents drivers from working horses when the heat index is over 90 degrees Fahrenheit.

It was signed into law in 2019 by Mayor Bill de Blasio, who ran on the promise to ban horse-drawn carriages but did not accomplish it in his two terms.

‘The city’s horse-carriage trade has been plagued for years by complaints of mistreatment and overwork of horses, and PETA is calling on the NYPD Animal Cruelty Investigations Squad to launch a criminal investigation into this incident.’

Neither NYCLASS nor PETA has commented on the horse’s diagnosis of EPM.

TWU Local 100 opposes both the ban on both horses and the proposed switch to electric cars.

‘People in New York City have fought for decades to get cars out of Central Park,’ he told Metro.co.uk. ‘Nobody wants this, except those that would have a financial interest in it.’

Girl, 7, shot in head in car park next to mum is named

For Transgender Americans, the Political Gets Even More Personal