Police and protesters across the US are clashing again on the fifth straight day of unrest as anger intensifies over the death of George Floyd.

The protests marked by chants of “I can’t breathe” – a rallying cry echoing the dying words of Mr Floyd – have spread to more than 30 cities, with cars and buildings burned, shops looted, and at least two people dead.

Governors in several states have called in National Guard troops after President Donald Trump warned state authorities they needed to adopt tougher tactics, or federal government would step in. 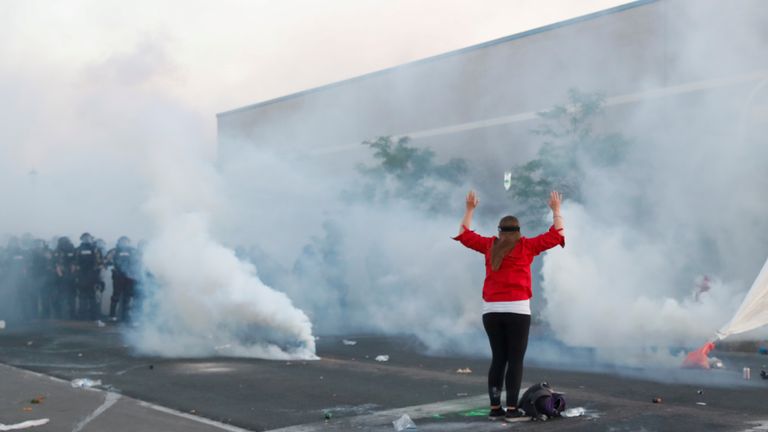 Curfews have been imposed in several cities, including Atlanta, Los Angeles, Philadelphia and Denver, but they have largely gone ignored, with tens of thousands of people spilling on to the streets.

In Washington DC, hundreds of demonstrators assembled near the Justice Department headquarters and later moved to the White House, where they faced off with shield-carrying police, some mounted on horseback.

President Trump tweeted that if protesters who gathered the night before in Lafayette Square, across from the White House, had breached the fence, “they would have been greeted with the most vicious dogs, and most ominous weapons, I have ever seen”.

He also vowed that “radical left criminals, thugs and others” would not be allowed to set communities ablaze.

Speaking in Florida after watching the launch of a SpaceX, Mr Trump said: “I will not allow angry mobs to dominate. Won’t happen.”

The full Minnesota National Guard was activated for the first time since World War Two after several nights of arson, looting and vandalism in parts of Minneapolis, the state’s largest city.

Minnesota Governor Tim Walz said the deployment was necessary because “outside agitators” were using protests over Mr Floyd’s death to create chaos.

“We are under assault,” Mr Walz said on Saturday. “Order needs to be restored.” 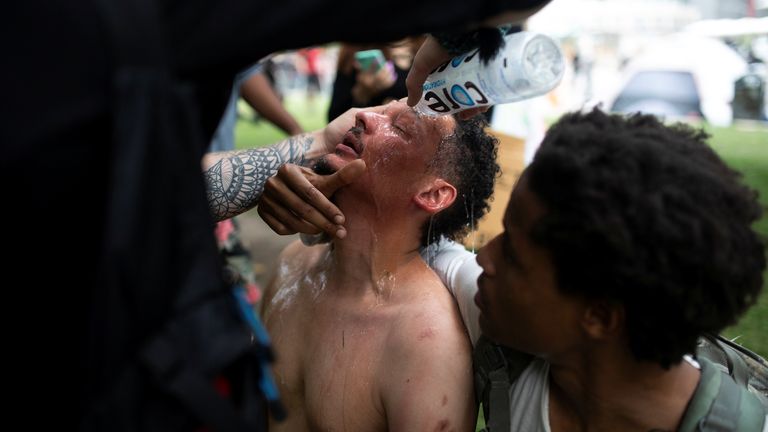 In Minneapolis, which has been the epicentre of protests since Mr Floyd’s death, officers fired tear gas and moved in to push away throngs of demonstrators who were gathering around the city police’s 5th Precinct.

Several protesters were knocked to the ground after police cars were driven into them in New York City.

Video posted to social media showed officers using batons and shoving protesters down as they made arrests and cleared streets.

Another video showed two New York Police Department vehicles driving into protesters who were pushing a barricade against a police car and pelting it with objects, knocking several to the ground.

“Our country has a sickness. We have to be out here,” said Brianna Petrisko, among those at lower Manhattan’s Foley Square, where most were wearing masks amid the coronavirus pandemic.

“This is the only way we’re going to be heard.”

Mr Floyd died on Monday in Minneapolis after a police officer put his knee on the unarmed black man’s neck for more than eight minutes.

The officer, Derek Chauvin, was arrested on Friday and charged with third-degree murder, but the arrest has done little to quell protests across the country.

Man, 65, killed by shark while swimming in Hawaii