Weather: Humid and mostly sunny, with a high in the mid-90s, and watch out for a severe storm this evening. Dangerously hot weather is expected through tomorrow. 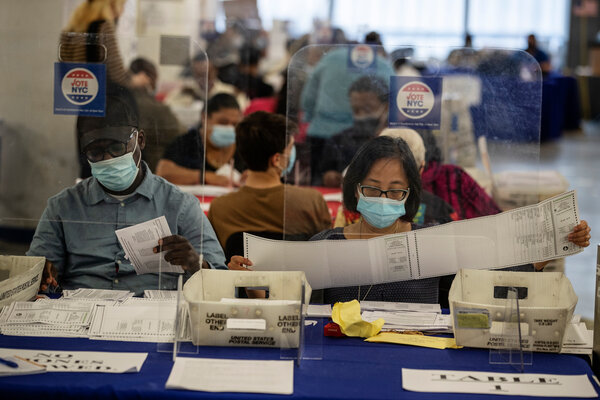 It has been two weeks since New York City residents last cast ballots in the Democratic mayoral primary. And while Eric Adams, the Brooklyn borough president, holds a lead in the results released so far, it is not yet clear who will win.

Today, elections officials are poised to release a new tally of results that could shed more light on who will ultimately prevail: a tabulation that incorporates for the first time the votes of tens of thousands of New Yorkers who cast ballots by mail.

Under the city’s new ranked-choice system, voters could rank up to five candidates on their ballots in order of preference.

Two weeks ago, elections officials began releasing preliminary results that included the first-choice votes of people who cast their ballots in person during the early-voting period or on Primary Day. In those results, Mr. Adams led Maya Wiley, a former counsel to Mayor Bill de Blasio, by 9.6 percentage points, and Kathryn Garcia, a former sanitation commissioner, by 12.5 points.

But since Mr. Adams did not get more than 50 percent of the first-choice votes, the ranked-choice system kicks in: lowest-polling candidates are eliminated a round at a time, with their votes reallocated to whichever remaining candidate those voters ranked next.

That tally, however, did not include the votes of any of roughly 125,000 outstanding absentee ballots.

Elections officials are expected to conduct another ranked-choice tabulation that includes most of those absentee ballots.

For either Ms. Garcia or Ms. Wiley to beat Mr. Adams, they would need a strong showing in these results.

Is it over after today?

No. Voters are still allowed to correct errors with mail-in ballot envelopes that might prevent their ballots from being counted until this Friday. Final results are expected to arrive sometime next week.

And the campaigns of Ms. Wiley, Mr. Adams and Ms. Garcia have filed lawsuits preserving their right to challenge the election results.

‘Maybe We Can Be Friends’: New Yorkers Re-emerge in a Changed City

A Gifted Writer Returns With a Supremely Harrowing Novel

Moving Downtown, to the Center of the Action

About 65,000 shells and aerial effects were launched from five barges near Midtown and Long Island City in what organizers billed as the biggest July 4 show ever. [Gothamist]

A 33-year-old man was fatally shot outside a public housing development in the Bronx, police said. [Daily News]

City officials are considering a proposal to create 24-hour entertainment districts where people can party all night. [Associated Press]

And finally: A library transformed

Muddling along for four decades in a nondescript former department store, the Mid-Manhattan library, at Fifth Avenue and 40th Street, served a growing swarm of local residents and commuters. But the branch steadily became dilapidated — an “embarrassment” to the New York Public Library system, as Anthony W. Marx, its president, put it.

After three years of construction and $200 million, the library system was ready to reopen its largest circulating branch in spring 2020. Instead, the pandemic extended the closure. The Stavros Niarchos Foundation Library, as it is now known (after a $55 million gift), finally threw open its doors to unlimited browsing in June.

Its theatrically expressive heart is a dramatic atrium billowing upward from the second floor, displaying the vast circulating collection of up to 400,000 volumes. The branch is phasing in its extensive programming over the coming months. (The New York and Queens library systems will fully reopen today, and Brooklyn will follow a few days later.)

Libraries have taken on the great task of helping people acquire knowledge, whatever the means of delivery, and have become more central to community life. The sociologist Eric Klinenberg made libraries Exhibit A in his 2018 book, “Palaces for the People: How Social Infrastructure Can Help Fight Inequality, Polarization, and the Decline of Civic Life.” He argued that “social infrastructure” — public places where people mingle and interact — can help reduce crime, isolation, and even strengthen communities.

It’s Tuesday — how about a new book?

I parked my car at an outdoor lot near Madison Square Garden while my friend and I went to the Rangers game. After the game, we walked to Virgil’s and spent some time catching up over a leisurely barbecue dinner.

On the way back to the car, I got a hollow feeling in the pit of my stomach when the parking lot came into view. From a distance, it appeared that my car was the only one left in the lot.

My uneasy feeling was soon justified. When I left the car there earlier in the evening, I had somehow failed to notice the sign clearly stating that the lot closed at 11 p.m.

As my friend and I stood helplessly at the locked gate pondering our stupidity and predicament, I saw a piece of paper taped to the fence and flapping in the wind. It was a handwritten note.

“I’m in the Irish pub around the corner,” it said. “Meet me there.”