Home » Americas » Most Republicans Say They Doubt the Election. How Many Really Mean It? 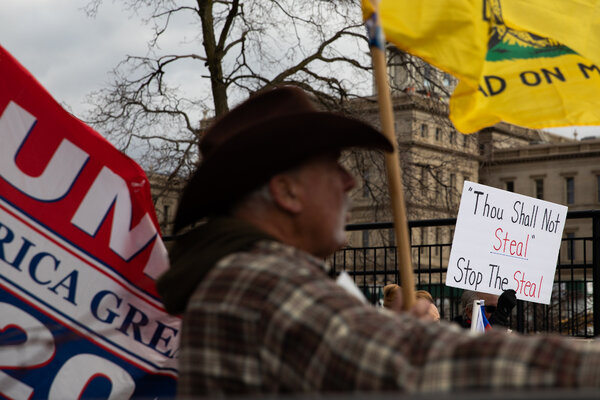 Since the election, surveys have consistently found that about 70 percent to 80 percent of Republicans don’t buy the results. They don’t agree that Joe Biden won fair and square. They say the election was rigged. And they say enough fraud occurred to tip the outcome.

Those numbers sound alarmingly high, and they imply that the overwhelming majority of people in one political party in America doubt the legitimacy of a presidential election. But the reality is more complicated, political scientists say. Research has shown that the answers that partisans (on the left as well as on the right) give to political questions often reflect not what they know as fact, but what they wish were true. Or what they think they should say.

It’s incredibly hard to separate sincere belief from wishful thinking from what political scientists call partisan cheerleading. But on this topic especially, the distinctions matter a lot. Are Republican voters merely expressing support for the president by standing by his claims of fraud — in effectively the same way Republicans in Congress have — or have they accepted widespread fraud as true? Do these surveys suggest a real erosion in faith in American elections, or something more familiar, and temporary?

“It’s one thing to think that you don’t trust the guys in Washington because they’re not your party,” said Lonna Atkeson, a political scientist at the University of New Mexico. “But it’s a whole other thing if you think, ‘Well, gee, they didn’t even get there legitimately.’”

She suggested, however, that these results be taken with something between alarm and skepticism.

Tracking surveys, which ask people the same questions over time on topics like the direction of the country or the economy, showed a lot of Republicans responding immediately after the election as if they believed the president had lost. Among Republicans, consumer confidence swiftly dropped, as did the share saying they thought the country was headed in the right direction.

Those results, which mirror past elections, suggest many Republicans knew Mr. Biden would become president. But they don’t tell us much about whether Republicans believe he won fairly.

In one survey released today by YouGov and Bright Line Watch, a group of political scientists who monitor the state of American democracy, 87 percent of Republicans accurately said that news media decision desks had declared Mr. Biden the winner of the election. That rules out the possibility that many Republicans simply aren’t aware of that fact.

Still, only about 20 percent of Republicans said they considered a Biden victory the “true result.” And 49 percent said they expected Mr. Trump to be inaugurated on Jan. 20 — a belief that’s “unreasonably optimistic” at this point, said Brendan Nyhan, a Dartmouth political scientist who is part of the research group. Digging deeper, he added, only about half of the group expecting Mr. Trump to be inaugurated also said he was the true winner. The other Republicans expressed instead some uncertainty about the outcome.

“And there’s a lot of people who are at different degrees of acceptance in between.”

In that group, political scientists say there are also people who give the equivalent of the party line answer to survey takers, regardless of their real beliefs.

“The evidence is strong that a number of people out there, even if they know the truth, will give a cheerleading answer,” said Seth Hill, a political scientist at the University of California, San Diego. Part of the president’s base appears eager to stick it to the establishment, he said. If those voters interpret surveys about the election’s legitimacy as part of that establishment, he said, “it’s quite possible they will use this as another vehicle to express that sentiment.”

For other voters, what they sincerely believe and what they want to be true may well be the same thing. And politics can be inseparable from that reasoning.

“Even if the magnitudes are bigger now, this tendency to respond in this way has just been with American politics since we’ve been asking about it,” said Michael Sances, a professor at Temple University.

A series of surveys by Morning Consult even suggests that Mr. Biden’s win in the election caused Democrats to revise their beliefs about the fairness of past elections. Respondents were asked before the November election if they believed presidential contests going back to 1992 were “free and fair.” In most of these years, about 65 percent to 70 percent of all registered voters said yes.

But when people were asked these questions again after this year’s election, Democratic faith in the 2016 election jumped 22 percentage points. It jumped 11 points for the 2000 election.

And so we may not have to wait too long for a clearer answer to whether Republicans have truly lost faith in elections. If their candidates win both Senate runoff races in Georgia in January, a contest with outsize national importance, perhaps Republicans across the country will decide that elections are fair after all.

One interpretation of this pattern is that our regularly alternating election outcomes mean that no one side gets wedded for too long to the idea that the whole enterprise is broken.

But all of these researchers emphasized that there was something new this year: One candidate in this election, the sitting president, has refused to concede and is himself working to undermine the results.

“In 2000, people had the sense that there was an unfairness in the process that had to do with technology; it wasn’t driven by partisan politics,” said Betsy Sinclair, a professor at Washington University in St. Louis. And there was a sense that we could fix that problem, she said, with updated voting machines and new legislation.

“The dispiriting thing for political scientists looking at 2020 is this isn’t a technical problem,” she said. “There isn’t an engineering solution. This is a much more complicated problem that has to do with the incentives of elites to stoke anger in the American population. That’s not something we can solve by coming up with a different ballot casting process.”

It will take more time, she said, before we know if the president’s messages will leave a lasting impression on Republicans. It’s clear that they have had an effect in the immediate term. One recent experiment found that among Mr. Trump’s supporters, people shown Twitter messages by the president attacking democratic norms lost confidence in elections.

In another recent survey experiment conducted by Brian Schaffner, Alexandra Haver and Brendan Hartnett at Tufts, supporters of Mr. Trump were asked shortly before Election Day how they would want him to respond if he lost, depending on the degree of the loss: if they would want him to concede and commit to a peaceful transfer or power, or resist the results and use any means to remain in office.

Other evidence shows that Republicans actually felt fairly good about how their votes were handled this year. In a large Pew survey, 72 percent of Trump voters said they were confident their vote was accurately counted. And 93 percent said voting was easy for them. That paints a different picture of how these voters view the electoral process that played out closest to them, even as many said elections this year weren’t run well nationally.

Voters have often said in surveys that they have more confidence in elections in their community or state than they do in voting across the country. That may be a useful insight for this moment, too: It means that the president’s sweeping claims about election fraud won’t necessarily dissuade Republicans in Georgia in January. They probably have more faith in their local election workers and precinct offices than these surveys suggest they have for the country.