Home » Americas » Mystery in a Small Town: A Quiet Couple Are Shot Dead, Their Daughter Missing

BARRON, Wis. — Cows and corn and silence stretch out on either side of Highway 8, beyond the Jennie-O turkey plant and nine churches that serve this town of just over 3,400. So when James and Denise Closs, a quiet couple who had lived in town for decades, were found shot to death in their taupe house last month, residents were stunned. It was an agonizing loss of two lives, but also of a way of life.

Front doors are being locked. F.B.I. agents have descended. Yet after three weeks, residents are left with a terrifying mystery that goes beyond the shocking deaths: Not only have the authorities publicly identified no suspect, no murder weapon and no motive, but the Closses’ 13-year-old daughter, Jayme, has been missing ever since.

“We have a double murder and a missing 13-year-old girl, there’s not much more to tell than that — and that’s the frustration,” said Barron County Sheriff Chris Fitzgerald, whose force of 78 ballooned at one point with 200 federal, state and local law officers joining an intensive, round-the-clock hunt.

More than 2,100 tips have turned up nothing. Law enforcement officials have turned a courtroom in a municipal building on the outskirts of town, about 90 miles northeast of the Twin Cities, into a nerve center for the investigation. Thousands of volunteer searchers have combed cornfields and cow pastures. And still nothing — no clues and no Jayme.

“We have exhausted every lead,” Sheriff Fitzgerald said. “There is no stone that has been unturned.” 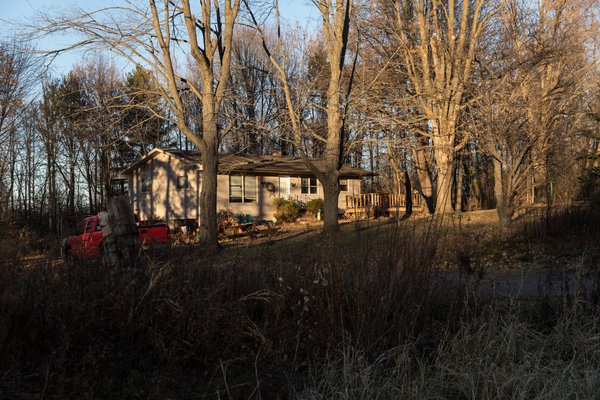 At just past 1 a.m. local time on Oct. 15, a 911 call came in to the sheriff’s office. No one spoke, but muffled shouting could be heard. Police traced the call to Denise Closs’s cellphone, and arrived at the house on Highway 8 four minutes later. They found the front door open and the couple dead. Mr. Closs’s body was in the doorway; his wife’s, inside the house. According to the sheriff, evidence indicated that Jayme was home at the time of the attack, though he would not describe the evidence. When deputies arrived, though, only Jayme’s dog, Molly, was there.

An Amber Alert was issued for Jayme, and in the weeks that have followed, her name has shot to the top of the F.B.I’s missing persons list. The agency has expanded its search nationwide, classifying her as “missing and endangered.” She is not a suspect in the case, according to the sheriff.

“Her body hasn’t been recovered, so there is no reason to say she is not alive,” the sheriff said. “That’s where you build your hope from.”

Jayme likes jazz dancing, ice-skating and volleyball at Riverview Middle School, where she is an eighth grader, social media accounts show. She adores shopping and Starbucks Frappuccinos, her aunt, Jennifer Smith, said during a news conference on Oct. 25. Ms. Smith clutched Molly, the dog, as she made an impassioned plea, addressing her niece as if she might be watching.

“Molly is sleeping in one of your sweatshirts,” her aunt said.

Mr. Closs, 56, and Mrs. Closs, 46, worked at the Jennie-O plant for 27 years, according to an obituary posted on the website of the Rausch and Steel Funeral Home. It read: “James loved the Green Bay Packers and the Wisconsin Badgers and getting into conversations on the ‘glory days’ of his high school sports career. Denise loved working with her flowers, feeding her birds, she loved angels and helping everyone, any way she could.”

Mrs. Closs taught religious school at St. Peter’s Catholic Church in a nearby town, Cameron. “She was the planner for her family, a birthday, or a marriage, she makes everything happen,” said the Rev. Balaraju Policetty, who gave eulogies at the couple’s funeral. “Your heart breaks,” Father Policetty said.

Around Barron, where Jayme’s sunny face and strawberry hair peers out from checkout counters from Duane’s Collision Repair Center to Dollar General, endless speculation has filled the void of hard information.

Over cups of black coffee and fudge-covered mini doughnuts, a group of welders who meet for breakfast daily at the A&W truck stop traded theories on a recent morning. At night, patrons sipped Spotted Cow ale and threw out hunches at ER Bar: Maybe there was a boyfriend? Maybe it was a hit? Maybe it was an inside job?

“Something like this makes you sketchy about everyone,” said Lisa Kosbab, 25, who works in a group home, as she sat at the bar.

In the past decade, there have been a total of four killings in Barron County, according to the sheriff. Barron is the kind of town where screen doors are left unlatched in summer; in winter, few lock their front doors. Those days are over, several residents said.

“It’s the not knowing,” said Kelle Jenderny, 48, as she stood at the Holiday gas station on Day 17 of Jayme’s disappearance. Down the street, black lettering on a white billboard spelled out “Bring Jayme Home.”

Since the murders, Ms. Jenderny said she spent $700 on a new alarm system and new outdoor lights that stay on all night. Her 8-year-old son now sleeps with her older son, 13. “He’s afraid to use the bathroom at night,” Ms. Jenderny said.

Longtime residents like the Closses have been joined in Barron over the last decade by refugees, many of them Somalis, who were drawn by jobs cleaning cages and slaughtering birds at the Jennie-O plant. These days, according to the mayor’s office, about 20 percent of residents have Somali heritage.

Not long after the killings and Jayme’s disappearance, members of the Somali community delivered trays of East African food to the sheriff’s office; the food was part of a flood of meals donated by residents and businesses to the officials working on the case.

“When we see in the U.S.A. the same things that we had back in our home, you fear,” said Kaltuma Hassan, 44, who was born in Somalia. She sat in the cafe she owns, Amin Restaurant, sharing dinner from a communal bowl with two of her children. “What if my children are next?”

As she spoke, her daughter, Najma Rashid, 10, stopped eating, clutched her stomach and cried out. “I’m scared!” she said. Her mother grabbed her hands. “I’m here for you.”

The investigation itself has fueled the unease here, several people said. Residents obsessively check the sheriff’s Facebook page for updates. Early on, the department asked residents to watch their neighbors for suspicious behavior. “People may act differently shortly after committing a violent act,” one post read.

Last week, a local man, Kyle Jaenke-Annis, was arrested inside the Closses’ house; officials said he had taken clothing, including underwear, that belonged to Jayme, but they also said he had been cleared of involvement in the killings and disappearance.

In recent days, the operation scaled down some; many federal and state agents who had filled local motels headed home.

Inside the sheriff’s headquarters, an office is being converted into a permanent operations center where local and outside law enforcement will continue working on the Closs case. “They’re not giving up,” Sheriff Fitzgerald said, adding that the number of tips wasn’t enough to keep so many officers here.

“I go to bed every night hoping my phone rings in the night saying, ‘We have her.’”

Alberta’s baby boom is over: Fertility rates down 4%