A day after New York City’s Board of Elections sowed confusion in the Democratic mayoral primary by releasing new tallies and then retracting them, it issued a new preliminary tally of votes suggesting that the race between Eric Adams, the primary night leader, and his two closest rivals had tightened significantly.

According to Wednesday’s nonbinding tally, Mr. Adams led Kathryn Garcia by just 14,755 votes, a margin of around 2 percentage points, in the final round. Maya Wiley, who came in second place in the initial vote count, barely trailed Ms. Garcia after the preliminary elimination rounds were completed: Fewer than 350 votes separated the two.

But in reality, all of those candidates remain in contention, and those numbers could be scrambled again as the city’s Board of Elections tabulates ranked-choice outcomes that will include roughly 125,000 Democratic absentee ballots, with a fuller result not expected until mid-July.

While campaign officials and some New Yorkers were engrossed in the emerging results, the count was nearly overshadowed by the vote-tallying debacle that drew national attention and stoked concerns about whether voters will have faith in the city’s electoral process.

The fiasco stemmed from an egregious error by the Board of Elections: Roughly 135,000 sample ballots, used to test the city’s new ranked-choice system, had been mistakenly counted. The board was forced to retract the results from a tabulation of ranked-choice preferences, just hours after it had published them on Tuesday.

The board on Wednesday eventually released the results of a second tally of ranked-choice preferences among Democrats who voted in person last Tuesday or during the early voting period.

Those results, which do not account for the tens of thousands of absentee ballots, echoed the findings briefly released on Tuesday: Mr. Adams, the Brooklyn borough president, held a much narrower lead than the one he held on primary night, when only the first-choice preferences were counted.

Under the city’s new ranked-choice voting system, voters can rank up to five candidates on their ballots in preferential order. If no candidate receives more than 50 percent of first-choice votes, the winner is decided by a process of elimination: Lower-polling candidates are eliminated one by one in separate rounds, with their votes distributed to whichever candidate those voters ranked next. The process continues until there is a winner.

History suggests it is very difficult, but not impossible, for a candidate who trails in an initial round to ultimately win a ranked-choice race. 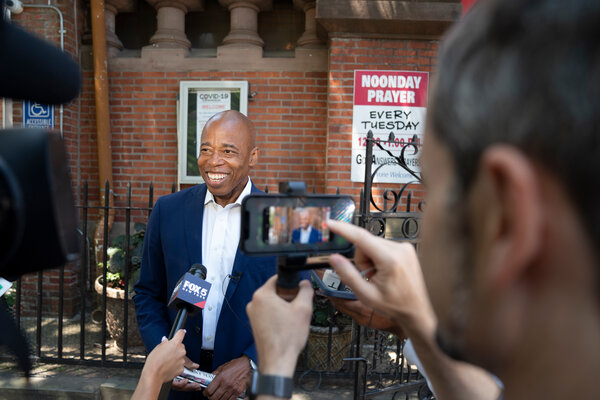 The new numbers offered a snapshot of the kinds of coalitions the contenders were able to build.

Ms. Garcia, who spent the final days of the race campaigning with Andrew Yang, a former presidential candidate, clearly benefited when he was eliminated in the ranked-choice exercise. She moved from third place into second, edging past Ms. Wiley, though Mr. Adams benefited when Mr. Yang was eliminated as well.

Mr. Yang had made clear that Ms. Garcia was his second choice, and the two had formed an apparent alliance, appearing together on campaign literature and in public, particularly in neighborhoods with significant Asian American populations.

Ms. Garcia also took the vast majority of Ms. Wiley’s votes when Ms. Wiley was eliminated in the exercise. Either candidate would be the city’s first female mayor.

They and Mr. Adams stressed the importance of ensuring that voters can maintain faith in the city’s electoral process as the Board of Elections tabulates the results. The candidates also noted the importance of the coming absentee ballot tabulations.

“With more than 120,000 absentee ballots left to count — in addition to provisional ballots and potential recanvassing of results — this election is still wide open,” Ms. Wiley said in a statement. “That’s why following yesterday’s embarrassing debacle, the Board of Elections must count every vote in an open way so that New Yorkers can have confidence that their votes are being counted accurately.”

Even before the chaotic display on Tuesday, the elections board had already faced criticism over its decision to reveal some ranked-choice results without factoring in absentee votes.

A number of strategists and officials warned that such a move could fuel voter confusion, especially if there is a different winner once absentee ballots are added in. Results will not be certified until all ballots, including absentee votes, are accounted for, a process that is expected to stretch well into next month.

“While we remain confident in our path to victory, we are taking nothing for granted and encourage everyone to patiently wait for over 124,000 absentee ballots to be counted and included in the ranked choice voting tabulation,” Ms. Garcia said in a statement. “Every candidate should respect the democratic process and be committed to supporting whomever the voters have selected to be the Democratic nominee for mayor.”

Mr. Adams’s campaign struck a similar note, saying in a statement that there were “still absentee ballots to be counted that we believe favor Eric — and we are confident we will be the final choice of New Yorkers when every vote is tallied.”

Tuesday’s extraordinary counting error comes not long after a 2020 presidential campaign in which Republicans sought to sow unfounded doubts about the integrity of the election and promoted false claims of voter fraud.

And the confusion surrounding the primary results in New York prompted former President Donald J. Trump to weigh in, claiming without evidence that “nobody will ever know who really won.”

Mr. Adams shot back on Twitter: “As always, Trump gets it wrong.”

“Yesterday, the results released by the B.O.E. had discrepancies which are being addressed,” he said. “There were NO similar issues in November. Neither of these elections were a hoax or a scam. We need to count every vote. That takes time, and that’s OK.”

In a statement Wednesday evening, the commissioners of the board apologized for the uncertainty and noted new tabulation safeguards, while stressing that the problems were not tied to the ranked-choice process.

“We have implemented another layer of review and quality control before publishing information going forward,” the statement said.

The statement acknowledged that the board “must regain the trust of New Yorkers.”

“We will continue to hold ourselves accountable and apologize to New York City voters for any confusion,” it stated.

Still, Tuesday’s developments gave more impetus to long-stalled efforts to bring meaningful reforms to the Board of Elections. The State Senate majority leader, Andrea Stewart-Cousins, said in a statement that the legislative body should move urgently to pass voting reforms.

“The situation in New York City is a national embarrassment and must be dealt with promptly and properly,” said Ms. Stewart-Cousins, a Democrat. “In the coming weeks, the Senate will be holding hearings on this situation and will seek to pass reform legislation as a result at the earliest opportunity.”

A spokeswoman for Assemblywoman Latrice Walker, the chairwoman of the Committee on Election Law, said that the committee would be holding a hearing on ranked-choice voting.

The counting error was the latest episode in a long series of blunders and other dysfunction at the Board of Elections, and the recriminations began nearly instantly.

Mayor Bill de Blasio on Wednesday called for a total overhaul of the body.

“Yet again, the fundamental structural flaws of the Board of Elections are on display,” he said in a statement, also calling for “an immediate, complete recanvass” of the vote count and “a clear explanation of what went wrong.”

“Going forward,” he said, “there must be a complete structural rebuild of the board.”

And Mr. Adams’s campaign announced that it had filed a lawsuit in State Supreme Court in Brooklyn.

“Today we petitioned the court to preserve our right to a fair election process and to have a judge oversee and review ballots, if necessary,” the campaign said in a statement. “We invite the other campaigns to join us and petition the court as we all seek a clear and trusted conclusion to this election.”

Ms. Garcia’s campaign indicated in a statement that it was filing in court as well, to preserve “our rights under election law to protect the canvass and provide for court supervision of the vote count if needed.”

The Wiley campaign declined to comment on any potential legal proceedings.

Separately, Mr. Adams and some of his allies have long expressed concerns about the ranked-choice voting process, which voters approved in a 2019 ballot measure. Some of Mr. Adams’s surrogates have cast ranked choice as an attempt to disenfranchise voters of color, a characterization that supporters of the process strongly reject.

But the bulk of the critical focus on Wednesday fell on the Board of Elections, as new details emerged about the circumstances that led to what the board insists was a human error.

For example, the supplier of the software that New York City used to tabulate votes repeatedly offered its assistance to the board, according to Christopher W. Hughes, the policy director at the Ranked Choice Voting Resource Center, which provided the open-source software.

He did not hear back.

‘A battle for the soul of America’

Ottawa doesn’t appear to be offering new money for Francophonie Games in N.B.