New York City has more students in classrooms — about 300,000 — than virtually any city in the country. Some pre-K students and children with disabilities are back five days a week. Transmission of the virus in schools has been strikingly low, with a positive-test rate of just .17 percent according to the most recent data, prompting one of the city’s top health officials to declare that the public schools are among the safest public places around.

Yet for all those hopeful signs, Mayor Bill de Blasio is on the brink of shutting down all classrooms across the school system, by far the nation’s largest, as New York confronts a second wave of the virus after months when the city’s success at curbing the outbreak made it the envy of the country. The closure could happen by Thanksgiving, if not sooner.

The move — which is now regarded by some City Hall officials as a question of when, not if — would be perhaps the most significant setback yet for the city’s recovery since the bleak days of spring, when it was a global center of the pandemic and all the schools were shuttered.

New York’s agonizing decision reflects a divisive debate raging in almost every country over the importance of reopening schools while the outbreak grinds on. That fight has sometimes seen parents, teachers, politicians and epidemiologists stake out conflicting positions and has raised difficult questions about the health threats of returning schoolchildren to classrooms — and the educational and economic risks of keeping them out.

The city’s approach stands in stark contrast to the strategy adopted in much of Western Europe, where keeping schools open has been a political and societal priority, even as governments have imposed strict lockdowns on public life, shutting or imposing restrictions on restaurants, bars, museums and theaters.

But New York City, which may close its classrooms before indoor dining is paused and before nonessential office workers are asked to stay home, has adopted a policy typical of many big American cities.

Last month, Boston canceled in-person classes, which had been offered to high-needs students for just a few weeks. On Tuesday, Philadelphia shelved plans to reopen schools later this month. Both those cities still allow some indoor dining. San Francisco, which paused indoor dining this week, has never reopened its schools for in-person instruction, despite a low transmission rate.

After schools across the globe closed this spring, it quickly became clear that online learning would have severe consequences for students’ academic progress and mental health, for the lives and livelihoods of their parents and for the pace at which cities and countries could begin to recover from the health and economic catastrophes the virus had unleashed.

Roughly 10 months into the pandemic, a growing number of public health experts say elementary schools in some places can be opened safely, and many educators and parents are raising urgent concerns about the inadequacies of remote learning. But many teachers and families also remain deeply worried about whether returning to classrooms will then bring the virus back into their homes. 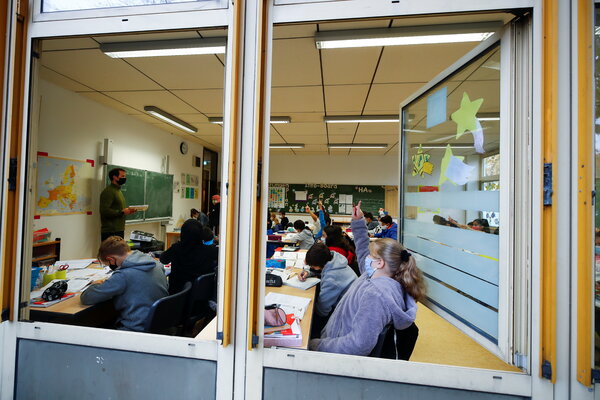 The city seems headed toward closing schools because Mr. de Blasio announced over the summer that the entire school system would automatically go to all-remote instruction if 3 percent of coronavirus tests done in the city were positive over a seven-day rolling average.

He did so as part of an attempt to reassure anxious parents and educators that the city would keep schools safe — and to avert a strike by the city’s powerful teachers’ union, which was then warning that schools would be unsafe come fall.

Still, the mayor is sticking with his pledge, City Hall officials said, and the city is now developing strategies for how to close down schools — and then reopen them again once the numbers improve.

“Closing the schools would probably be the single policy most likely to jolt the public into realizing how serious this current situation is,” said Mark Levine, who chairs the City Council’s health committee. “If you recall the spring, it was that moment when we closed the schools when the city really said, ‘Oh, my God, this is real.’”

In recent days, the mayor has implored New Yorkers to help slow the spread of the virus — and thus keep schools open.

“We reopened so much of the life of the city, the businesses, the employment, people got their jobs and livelihoods back, schools opened,” he said during a news conference. “Can we sustain this if we can fight back this second wave and end up where we are or better? Yes.”

School closure would mean that all 1.1 million public school students in the city would learn remotely until the numbers improve. Though almost all city schools are open, the vast majority of parents have decided to keep their children learning from home for now, including significant percentages of Asian-American, Latino and Black families. About a quarter of city students are splitting time between remote and in-person instruction under the city’s hybrid system.

There is little consensus nationally about reopening schools. In fact, many districts in other states have stayed open even though they are in regions with much higher rates of infection than New York’s.

In Iowa, Gov. Kim Reynolds has said schools should remain open as long as the average positivity rate in that region of the state is under 15 percent, an extremely high threshold that public health experts have criticized.

On Tuesday, the state granted waivers to several districts, including Iowa City and Des Moines, to go remote for two weeks. But restaurants, bars, gyms and movie theaters remain open.

New York City has among the most conservative thresholds for closure in the country.

Mr. de Blasio’s 3 percent figure is lower even than the one set by Gov. Andrew M. Cuomo, who said this summer that schools in a region where average test positivity exceeded 9 percent would be forced to shutter. The state education department has approved the city’s reopening plan, which included the 3 percent closure threshold, and Mr. Cuomo has given districts wide latitude to determine how they reopen schools.

Still, the governor could intervene at any point and order that the schools be kept open.

A growing body of evidence suggests that children under 10, at least, are not superspreaders, as they were initially feared to be, and that the spread of the virus from schools to local communities is not more prevalent than from bars, restaurants or other businesses.

Research from around the world has also shown that elementary schools have seen only limited outbreaks. New York City has reopened schools for all grades, but many high schools have asked students to learn at home if they are able, which has kept many thousands of high school students out of classrooms over the last few weeks.

With such research in mind, a growing number of public health experts have said that local leaders should prioritize keeping elementary schools open as much as feasible even as they consider imposing restrictions on other parts of society.

Uché Blackstock, an emergency medicine physician in New York City and the founder of Advancing Health Equity, an organization focused on bias in health care, said the city should reconsider the 3 percent threshold.

“We need to prioritize schools, and we need to think about innovative and safe ways to keep as many schools open as possible,” she said, pointing to research showing that schools were not “key drivers” of infections. Dr. Blackstock said her own children are back in city classrooms and that their experience has been excellent so far.

Whether schools can safely reopen depends foremost on how widespread the virus is in the community and on safety measures districts have in place.

In New York, classrooms that once seated 30 children now accommodate nine to allow for social distancing. Masks are required throughout the day, and there is random testing in each school once a month. Over 100,000 tests conducted in more than 2,800 schools over roughly the last month turned up only 174 positive cases.

“What we see so far is that you are less likely to encounter somebody with infection in a school then you would be outside the school and not just by a little, but by a lot,” Dr. Jay Varma, the mayor’s senior adviser for public health, said at a news conference at the end of last month.

Even Michael Mulgrew, president of the United Federation of Teachers, has acknowledged that schools are safer than he anticipated.

“We thought our biggest problem was going to be the safety,” he said in a recent interview, adding that education officials have been “phenomenal” in addressing those issues. Mr. Mulgrew said he was now concerned about academic quality in schools.

But Mr. Levine, the City Council health committee chairman, said one of the main goals of a school shutdown would be to prevent hundreds of thousands of students, parents and school employees from riding public transport to schools each day while the virus is surging.

“We need people to start limiting their movement again,” he said.

The uncertainty around schools has led to enormous anxiety for educators and parents, who spent the summer unsure if their children would return to classrooms come fall.

But Mr. de Blasio recently announced that parents who have so far opted for remote-only classes would have only one more opportunity to choose in-person learning for the rest of the school year. Families have only until Sunday to decide whether they want their children to have any in-person instruction, probably until at least September.

By the time those children are scheduled to return to classrooms in the next few weeks, the entire school system may already be closed.

Pictured: Hunter, 17, who died after falling and impaling himself on his rifle
Europe