Alternate-side parking: in effect till next Monday. 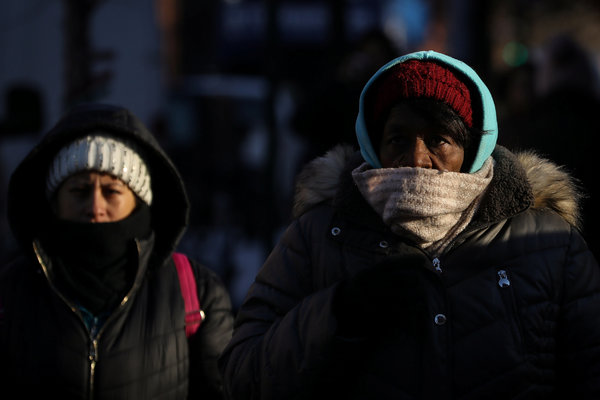 The polar vortex has arrived.

At 6 a.m. the temperature in Central Park hit 2 degrees. The wind made it feel like about 17 below zero.

That’s cold enough to get frostbite on exposed skin, so cover everything up. North and west of the city it is colder still: 9 below zero in Sussex, N.J., with a wind chill of -20.

In the city, the mercury will creep up to only 16 degrees by afternoon. Overnight, more of the same, down to 10, with below-zero wind chills.

By tomorrow afternoon, the worst should be over. Temperatures are expected to crawl up to the low 20s, then the 30s on Saturday, the balmy 40s on Sunday and into the 50s early next week.

Brace yourselves: City officials are warning people to stay indoors as much as possible today, and use mass transit instead of driving. But city public schools and government offices will remain open.

In the suburbs, dozens of school districts are opening late, and several are closed, including Bloomfield and Belleville, N.J.

The city has issued a “Code Blue” alert: Outreach teams are checking on homeless people on the street more frequently and encouraging them to go to shelters.

And note to apartment dwellers: Landlords are required to keep indoor temperatures at 68 degrees during the day and at least 62 degrees overnight.

How bad is it? Two degrees is the lowest temperature seen in New York City since Valentine’s Day 2016, when we hit negative 1 degree (and broke a century-old record for that day). The 16-degree high forecast for today would be tied for the lowest high temperature for Jan. 31 ever recorded in the city.

Be grateful: As even deeper cold sweeps much of the northern half of the country, our neighbors far upstate have seen wind chills well into the minus-30s, with areas of heavy snow — up to 4 feet expected near Watertown.

Closer to the city, the Long Island Rail Road is warning of possible delays because of broken rails and moisture that might “short out” motors in older train cars. A broken rail on the Port Jefferson branch is causing minor delays.

Here’s what else is happening.

Best of The Times

El Chapo’s wife speaks: “I admire him” Emma Coronel Aispuro said, while declining to comment on whether she helped orchestrate her husband’s 2015 jail escape.

The battle to landmark the Strand: It’s about the city’s culture, our architectural critic, Michael Kimmelman, said.

Making sense of a very crowded election: This graphic shows what your ballot may look like in the Feb. 26 race for New York City public advocate. [Gothamist]

Former principal: I was victim of “geo political crusade”: Debbie Almonstaser, who just published a book, discussed her 2007 ouster from the Khalil Gibran International Academy in Brooklyn. [NY1]

Closing after 36 years in business: St. Mark’s Comics will close at the end of February. [Facebook]

Want to learn to sign language? The Harlem Library is offering a workshop. 4 p.m. [Free]

And finally: ‘Nosferatu’ returns to haunt us

Nearly 100 years after its 1922 debut, the film “Nosferatu” is, according to one of our film critics, “among the scariest” vampire movies ever made. Another called it, simply, “one of cinema’s most beautiful horror movies.”

Even nonmovie buffs may have seen one notable scene from the film: A terrified woman sitting on her bed convulses into submission after the shadow of a hand seizes into a fist over her heart.

Like many silent classics, “Nosferatu” is sometimes screened with live-music accompaniment. That usually happens around Halloween, but if you can’t wait that long for such an experience, you’re in luck.

The movie is showing, for free, at Brookfield Place in Lower Manhattan Thursday at 7:30 p.m. A live score will be performed by the Irish composers Irene and Linda Buckley. It’s part of Brookfield’s “Silent Films / Live Music” series, held inside its indoor market.

On Friday, it’s showing Josef von Sternberg’s 1927 classic crime drama “Underworld.” Music will be performed by the Alloy Orchestra, a trio of musicians dedicated to bringing sound to silent movies.

On the Sunday before New Year’s Day, my son and I drove to Macy’s in Herald Square. He needed to buy some clothes to upgrade his wardrobe for a job that started Jan. 3.

I saw a spot at a corner along Seventh Avenue. I wasn’t 100 percent sure it was legal and I had to drive around the block to get into it, but I figured it was worth a try.

I pulled onto the block and approached the corner spot. I noticed a police van parked a few cars back.

I slowed down and moved toward the corner space, but decided it was no good and signaled that I was pulling back out into traffic.

Just then, a police officer walked from the van toward a trash can on the corner. He waved for me to back up into the space, guiding me until I was an inch in front of the car parked behind me.

“I’m just over the crosswalk,” I protested.

“And the pink signs say ‘No parking Sunday’.”

US: Hundreds of sexual assault claims filed in New York

Condo in Kelowna evacuated due to hazardous materials; police investigating