It’s Thursday. A dog on the tracks on the Williamsburg Bridge delayed subways for over an hour last night.

Alternate-side parking: in effect till Jan. 21. 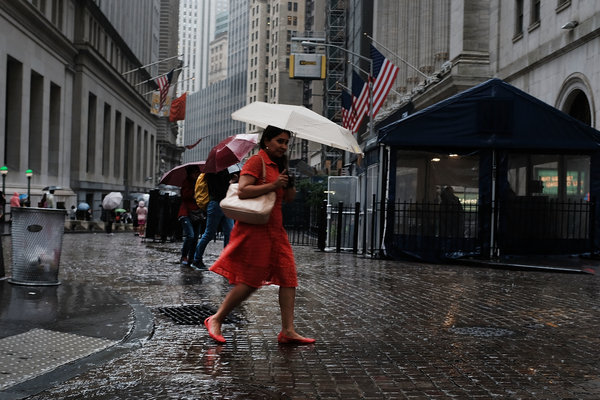 Maybe we should call it the Soggy Apple. New York City just experienced its fourth-wettest year on record.

In 2018, 65.55 inches of precipitation fell in Central Park, according to the National Weather Service. That’s more than 15 inches, or 31 percent, above normal.

This is part of a broader pattern caused by global warming. The Northeast is getting wetter; the Pacific Northwest is getting drier; and the South is getting hotter.

Out of the 149 years of weather data collected at Central Park, the 10 wettest have all happened since 1972.

To put it another way: New York City’s wettest years all occurred since “The Godfather” hit movie theaters.

Weren’t around for that movie? Try this: five of New York City’s 10 wettest years have taken place since 2003 — when the first “Pirates of the Caribbean” movie was on the big screen.

Not that excess wetness is a consistent phenomenon — the three years before 2018 were all unusually dry. But the overall trend is real.

And if you think all that moisture is coming down nice and easy, think again.

“We’re seeing a lot of precipitation coming down quickly and not so evenly spread throughout the year.”

The on-the-ground effects of all that stuff falling from the sky include overwhelmed irrigation systems producing pollution-carrying runoff (yuck) and washed-out streets, Ms. Spaccio said.

And, based on my own scientific research: Everybody forgets how to drive, subway stations get flooded and sidewalks fill with people carrying obnoxiously large umbrellas.

Meteorologists at the National Weather Service were not available to comment because they’re dealing with their own problem: a government shutdown.

Today, however, the rain is taking a day off. Skies will clear, with a high of 47. But it returns on Saturday.

Here’s what else is happening:

Best of The Times

Showtime at the Apollo: The history of the legendary theater is told in a new graphic novel.

Acquitted: A jury found a former top police official not guilty of bribery, though prosecutors contended he did favors for businessmen who gave him expensive gifts and trips.

$400 million, and counting: Ridership on the Port Authority’s PATH train is up, but it is losing money.

Floating billboards: They’re here, and could make the water around Manhattan feel like Times Square. [Gothamist]

More people left New Jersey than any other state: That’s according to data from a moving company that has tracked this information since 1977. [NBC New York]

A Staten Island hospital made people sick: Nurses and other employees have gotten ill, and mold has been detected. [Daily News]

Four kosher businesses close on the Upper West Side: One store manager said the rent “doubled” on her spot, at Amsterdam Avenue near 91st Street. [West Side Rag]

Madonna sang at the Stonewall Inn: to celebrate the 50th anniversary of the gay rights movement, which the West Village establishment helped start in 1969. [Page Six]

That’s the number of women joining Congress and being sworn in today (you can watch on C-Span). Among them are Alexandria Ocasio-Cortez of the Bronx and Mikie Sherrill of New Jersey.

For the newcomers, the children of Representative Grace Meng of Queens have some advice to share.

“On this Day,” a comedian-led show at the Caveat about what happened on this date in history and “about how each day is special to each and every one of us.” 6:30 p.m. [$10]

The quintet led by the composer and pianist Saman Samadi performs at Areté in Greenpoint. 9 p.m. [$15]

“Grace,” a group show about gender, race and identity, opens at the Laurence Miller Gallery in Chelsea. [Free]

And finally: More fun than a year without subways

The L train shutdown is not funny. But it is a game.

More than $3,000 has been raised on Kickstarter for the creation of Escape from HelL, a “board game about getting to Manhattan from Williamsburg once the L train shuts down.”

How it works: As in Chutes and Ladders, players roll dice and move around the board to reach a destination.

In Escape, each player is a hipster in Bushwick trying to get to work in Manhattan. Since the L is not running, players have to rely on buses, ferries, bikes and cabs.

Along the way are cards of chance.

Move back three spaces because “Your ex is the other person in your carshare. You open the door and jump out.”

Another card: “Your SoulCycle sweat looks like you peed yourself. Go back and change clothes.”

Go back two spaces because “You finally got on the J/M/Z but your subway car only has one person on it. And it smells like a toilet.”

The board is colorfully decorated, with ride-sharing bikes, a graffiti mural and a bridge. (The song about the game is pretty catchy, too.)

The L train shutdown starts in April and is expected to last 15 months.

Unlike the train, the board game is moving ahead without problems. It will be delivered to Kickstarter supporters next month, according to Hunter Fine, a co-creator.

If games are left over, Mr. Fine said he would try to sell them, possibly in subway stations.

It was summer 2001, and my mother and I were having lunch at the Cupping Room in SoHo.

“That guy over at that table is the one who wouldn’t pitch on Yom Kippur,” my mother said out of nowhere.

What would Sandy Koufax be doing here? I replied.

A few minutes later, the man she was referring to got up from his table and walked past the one where we were sitting.

“Are your initials S.K.?” my mother said without hesitating.

“Yes,” he said before continuing on his way.

I don’t know what amazed me more: seeing Sandy Koufax or my mother recognizing him.

Absolute discharge granted for woman caught on video not wearing a mask at Sun Plaza
We and our partners use cookies on this site to improve our service, perform analytics, personalize advertising, measure advertising performance, and remember website preferences.Ok