Trump’s ad sparked outcry last week, drawing accusations of racism and fear-mongering ahead of the midterms. 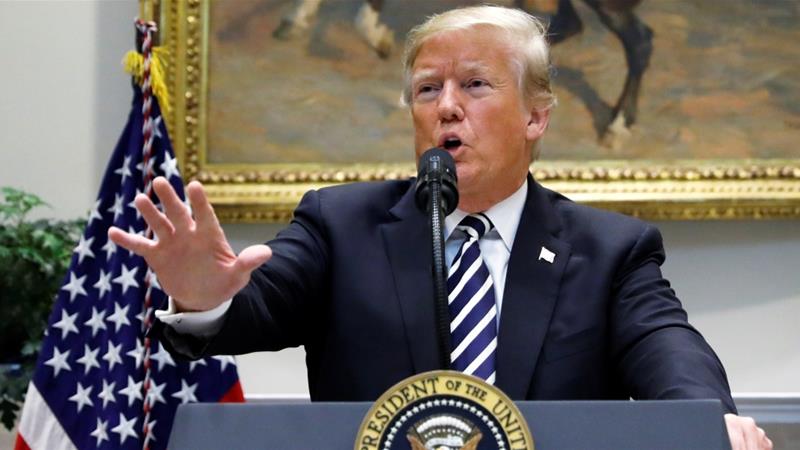 NBC, Fox News and Facebook pulled a widely-condemned anti-immigrant ad by President Donald Trump’s campaign as a bitter election fight for control of the US Congress headed on Monday for an unpredictable finish.

Tuesday’s elections, widely seen as a referendum on Trump, have been portrayed by both Republicans and Democrats as critical for the future of the country. At stake is control of both chambers of Congress, and with it the ability to block or promote Trump’s agenda, as well as 36 governor’s offices.

A surge in early voting, fueled by a focus on Trump’s pugilistic, norms-breaking presidency by supporters of both parties, could signal the highest turnout in 50 years for a midterm US election, when the White House is not on the line.

The 30-second ad, which was sponsored by Trump’s 2020 re-election campaign and which debuted online last week, featured courtroom video of a Mexican citizen convicted in the 2014 killings of two police officers, juxtaposed with scenes of a US-bound caravan of Central American migrants and refugees.

Critics, including members of Trump’s own party, had condemned the spot for its open racism.

The ad fit into the president’s near-daily attacks on immigrants and the caravan, which he has described as an “invasion”.

CNN had refused to run the ad, saying it was “racist”. NBC, owned by Comcast Corp, said on Monday it was no longer running the ad, which it called “insensitive”.

Fox News Channel, which Trump has repeatedly named his favourite broadcaster and is highly supportive of his increasingly nationalist policies, also said it would no longer run the spot. Fox News, a unit of Twenty-First Century Fox Inc, said it had made the decision after a review but did not elaborate.

Facebook Inc said it would no longer allow paid promotions of the ad although it would allow users to share the ad on their own pages.

‘A lot of things are offensive’

Trump batted away reporters’ questions about the networks’ decision to drop the ad.

“You’re telling me something I don’t know about. We have a lot of ads, and they certainly are effective based on the numbers we’re seeing,” Trump said as he departed Joint Base Andrews in Maryland for a rally in Cleveland, Ohio.

After Ohio, Trump was headed to campaign against vulnerable Democratic US senators in Indiana and Missouri at the end of a six-day pre-election sweep.

Opinion polls and election forecasters favour Democrats to pick up the minimum of 23 seats they need on Tuesday to capture a majority in the US House of Representatives, which would enable them to stymie Trump’s legislative agenda and investigate his administration.

But Republicans are favoured to retain their slight majority in the US Senate, currently at two seats, which would let them retain the power to approve US Supreme Court and other judicial nominations on straight party-line votes.

With Trump focusing much of his increasingly heated campaign rhetoric on immigrants, the lead-up to the midterm vote has been marked by violence, including a spate of attempted pipe bombings targeting some of the president’s vocal critics and a deadly assault on a synagogue by a gunman.