Weather: Gradually tapering snow, with wind gusts up to 40 m.p.h. High in the low 30s. 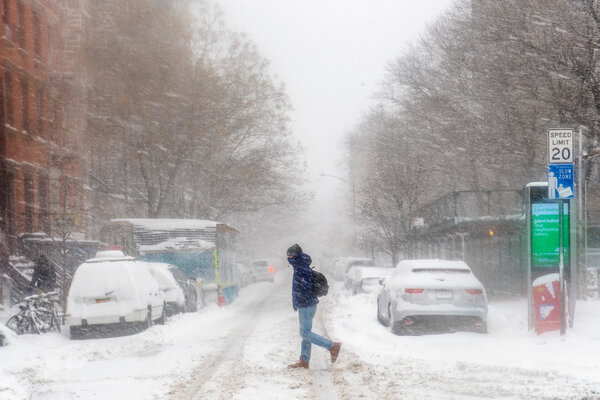 A storm has piled blankets of snow on city streets. A couple of inches more is expected today, for a total of 18 to 24 inches by the time the snowfall ends, which may happen late tonight.

City and state officials are asking residents to stay home and to only go out when necessary — a familiar ask almost a year into the coronavirus pandemic.

[Get the latest updates on the storm and cancellations or resumptions here.]

Gov. Andrew M. Cuomo declared a state of emergency in 44 counties because of expected wind gusts from 40 to 60 miles per hour and flooding in coastal regions.

“I am fearful even this tough situation we’re in now could get worse, so I need people to heed the call,” Mr. de Blasio said during a news conference Monday. “Stay home.”

The storm has also affected the city’s vaccination efforts. Appointments for today at government-run sites in the New York metro area are postponed.

Though in-person classes were canceled until Wednesday, remote learning will go on. (Some schoolchildren may lament not having a snow day.) The Long Island Rail Road and Metro-North Railroad will restart at 4 a.m. today, and aboveground subway service will resume at 5 a.m.

Forecasters have said the winter storm could be among the heaviest in the city’s history.

Just weeks ago, the city was blanketed in what had been the biggest snowstorm in years. In December, the National Weather Service recorded 10 inches of snow in Central Park, and parts of the Bronx and Queens were covered in a foot of it; upstate, Binghamton was buried under 41 inches.

Unlike storms of yore, the heavy snowfall in the current system was a welcome change of scenery for residents who were stuck at home anyway.

“This is quite nice, to have just a little part of time set out for not thinking about anything Covid-related,” said Krivia Jara, 31, as she walked her dog in Washington Heights.

While many New Yorkers continued to work from home, the city’s essential workers braved the dangerous conditions and limited public transportation.

Saleem Hassan, 18, was working behind the counter at Fort Tryon Deli & Grill on Monday, weighing his options. He expected that co-workers who lived in Queens would not be able to relieve him, so he had to chose between closing early and working until 10 p.m.

Ocasio-Cortez Says She Is a Sexual Assault Survivor

He Threatened Pelosi. Agents Didn’t Wait to See if He Really Meant It.

‘One Property at a Time’: A City Tries to Revive Without Gentrifying

The authorities raided two illegal parties attended by hundreds of people over the weekend. [NBC]

The man found dead in a Chelsea apartment with his deceased mother is believed to have sprayed Febreze on her body to mask the odor. [New York Post]

Who taught Jack Daniel how to make whiskey? What are the stories behind Gullah Geechee cooking? Who was Georgia Gilmore?

The Museum of Food and Drink’s programming for Black History Month will explore these questions and more.

Starting tomorrow, the museum is hosting a series of events that will explore themes in its upcoming exhibition “African/American: Making the Nation’s Table,” with Jessica B. Harris as the lead curator.

Each event, through stories of migration, enslavement, resilience and legacies, honors the African-American people that shaped America’s food culture in the past and now.

“The tangible, tactile elements of the museum experience is one thing, but the public program was where we were really going to be able to sort of dig in to deeper stories,” said the chef Thérèse Nelson, founder of Black Culinary History. She will speak at the final event, which is about the legacy of food activism.

“I hope people really get it,” Ms. Nelson said. “There’s something really vulnerable about asking people to care about or think about or contend with these foodways.”

In addition to virtual-reality short films and cooking demonstrations, the programs will feature conversations with a roster of speakers that span the food space.

Guests include the chefs Mashama Bailey of the Grey and Omar Tate from Honeysuckle; the writer Korsha Wilson; the chef and farmer Matthew Raiford of Gilliard Farms; the Brooklyn Brewery brewmaster Garrett Oliver; and many more.

The opening date is uncertain for the exhibition, which has already faced an almost yearlong delay because of the pandemic.

But either through online events or a weekly Instagram post highlighting an American culinary hero from its Legacy Quilt, MOFAD has found creative ways to showcase parts of the exhibition and continue the dialogue on how African-Americans molded the nation’s culinary identity.

“We can no longer sit by idly and say that this is all this one food item is anymore,” Mr. Raiford said. “We actually have to do some of the research and conversation and all of that so that we can give the just due for all the people that may have helped create and/or do.”

Here’s a full list of the programming. Ticket prices vary by event.

My wife and I were outside the prewar walk-up apartment building in Long Island City that was our home for several years when we spotted a man walking a cat on a leash.

We went inside, and the man and his cat did too.

We made our way up the four flights to our door. The man with the cat, behind us the whole way, stopped at the door next to ours. He put a key in the lock.

“Yes,” he said, before disappearing into the apartment. “I’ve lived here for eight years”