Home » Americas » New York ends requirement to quarantine for international travelers, but recommends they still do so. 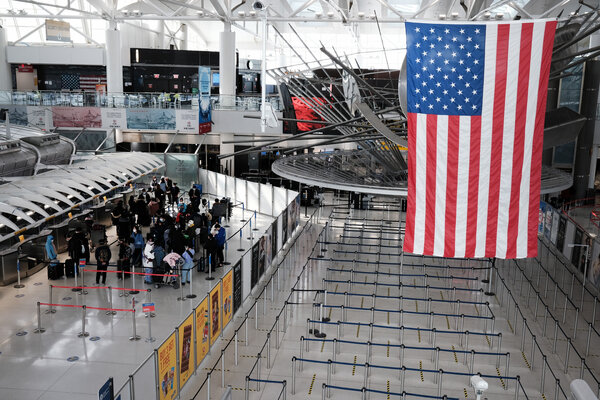 New York will no longer require international travelers arriving in the state to quarantine though it continues to recommend they do so, according to new guidance released by the Health Department.

The change was intended to bring the state in line with travel recommendations issued earlier this month by the Centers for Disease Control and Prevention.

In that guidance for international and domestic travel, the C.D.C. said that people fully vaccinated against the coronavirus could travel safely “at low risk to themselves” but should still follow health precautions in public such as wearing masks. Federal health officials also said that they preferred all people avoid travel while the threat of the virus remained so high in the United States. The C.D.C. also cited a lack of vaccine coverage in other countries, and concern about the potential introduction and spread of new variants of the virus that are more prevalent overseas.

The C.D.C. currently requires all international travelers arriving in the United States to show proof of a recent negative test result before boarding their flights. When fully vaccinated Americans travel abroad, they only need to get a coronavirus test or quarantine if the country they are going to requires it. However, the guidance says they must have a negative coronavirus test before boarding a flight back to the United States, and they should get tested again three to five days after their return.

New York health officials said in their guidance, released Saturday, that they still recommend all international travelers get tested three to five days after arriving in the state.

They also suggested that unvaccinated travelers should self-quarantine for as many as 10 days and avoid people at risk of serious illness from the virus for two weeks.

The new international guidance came after the state also ended its requirement that domestic travelers to New York quarantine upon arrival. At the time, Gov. Andrew M. Cuomo traced the decision to the pace of vaccinations and a decline in virus figures across the state, though the state was adding new cases at a higher rate than the country as a whole.

As of Sunday, the state’s average daily positive test rate over the previous week was at 3.27 percent. Virus-related hospitalizations were at 4,083, their lowest number since Dec. 2, according to Mr. Cuomo’s office.

According to a New York Times database, New York State is adding new virus cases at the fifth-highest rate in the country. As of Sunday, the state was reporting an average of 37 new virus cases a day for every 100,000 residents over the last week. The nation as a whole was averaging 21 new cases per 100,000 people.