(Want to get New York Today by email? Here’s the sign-up.)

It’s Wednesday. ?Who won? Powerball will present a New York record $343.8 million check today to a Harlem man for the Oct. 27 drawing.

Weather: Sunny but chilly, with a high of 39. First freeze tonight: down into the 20s. And a messy mix of snow, sleet and rain tomorrow. Winter’s coming. 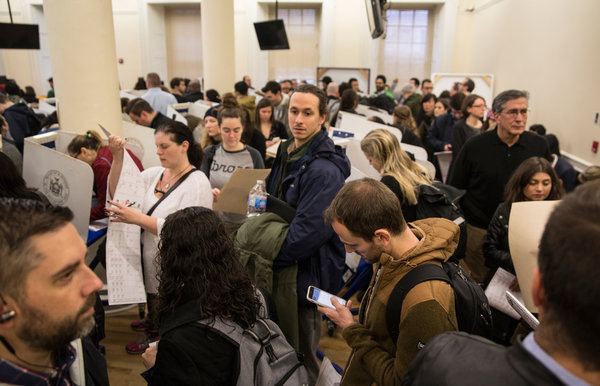 New: It’s official. Amazon will open a major office in Long Island City, Queens, and another in Virginia. A third, smaller one, will open in Tennessee.

What Amazon got: At least $1.7 billion in tax incentives from New York State. And a helipad, because, well, have you seen the subways in New York?

What Amazon will provide: 25,000 jobs, eventually (or supposedly).

When: Mayor de Blasio, who courted Amazon, said New York “is about to” get those jobs. But the credit agency Fitch Ratings said the impact will be more muted. [Daily News]

Where: Long Island City, “next to the largest public housing unit in the country,” the mayor said. “The synergy is going to be extraordinary.”

Or it could turn out to be a glaring example of the growing divide between ascending and struggling communities. (Perhaps the Mr. de Blasio of 2013 would call it a tale of two cities.)

The opposition: Critics say a giant company owned by the richest man on the planet shouldn’t get tax breaks or incentives to move here. Where else can they go? Not many other cities can absorb a move of this size.

Can it be blocked?: Unlikely because the deal is being arranged through a state agency under Governor Cuomo’s control. Still, court challenges are likely. Because this is New York.

The politics: It’s a tale of two progressives, as The Times’s Eliza Shapiro noted.

On one side is Mr. de Blasio, who has worked to keep Walmart stores out of New York and often decries the influence of money. In July, we wrote a story headlined, “Bill de Blasio Is a Progressive. But Is He Progressive Enough?”

On the opposing side is the congresswoman-elect Alexandria Ocasio-Cortez of the Bronx and Queens (though her district does not include Long Island City). She has spoken out against the deal.

2. While you were waiting on line, voting machines were on ice

From The Times’s William Neuman at City Hall:

With a huge turnout expected for Election Day, you might have thought that the Board of Elections would have placed as many ballot scanners as possible at its 1,200 polling places.

But even as scanners were jamming all around town, causing lengthy delays, the board had about 1,000 scanning machines in storage, election officials said on Tuesday.

Michael Ryan, the executive director of the board, said it “deployed” about 4,000 scanners. The board owns more than 5,000.

A Manhattan board member, Frederic M. Umane, tried to explain why.

He said the redesign and relocation in recent years of many polling sites to comply with the Americans with Disabilities Act had reduced the space available to set up machines — and that the board therefore could not have distributed more of them.

3. Discount MetroCards for the poor, but only if they buy in bulk

New: The new half-fare MetroCards for low-income riders will be available only for 7-day or 30-day passes, The Times’s Emma Fitzsimmons reported.

Catch up: After resisting the plan initially, Mayor de Blasio included the Fair Fares program in this year’s city budget. It starts in January.

The vote gives Mr. Williams, a Brooklyn city councilman, a leg up in what is expected to be a crowded nonpartisan election this winter that could have 10 or more candidates. (If you’ll recall, the outgoing public advocate, Letitia James, was just elected state attorney general.)

The vote: Mr. Williams racked up 414,000 votes in the city during his unsuccessful run for lieutenant governor while working with the Working Families Party.

Why it matters: It is expected to be a low turnout election.

With volunteers on the ground, coordinating a small-donor campaign — Mr. Williams has never been a prolific fund-raiser — the group’s support can be invaluable.

At the trial of the notorious druglord, his lawyer argued El Chapo is not the mastermind behind the murderous Sinaloa cartel as prosecutors claim, but “a scapegoat.”

Alan Feuer, who’s covering the trial in Federal District Court in Brooklyn for The Times, noted:

7. What else is happening

Breathalyzer tests thrown out: A New Jersey court said 20,000 tests used to measure driver intoxication are inadmissible. My colleague Nick Corasaniti said this won’t affect cases where drivers were falling down or showing other signs of drunkenness. [NYT]

Another Weinstein lawsuit: The actress Paz de la Huerta sued the embattled film mogul in Superior Court in California. More than a year ago, she accused Mr. Weinstein of raping her twice. The Manhattan district attorney declined to prosecute. [NYT]

Quacklash: An avian expert at the American Museum of Natural History says the Mandarin duck of Central Park is “of zero ornithological interest.” [Gothamist]

Tugboat 1, trains 0: Because New Jersey Transit is the official railroad of Murphy’s Law, a bunch of trains were canceled yesterday after a tugboat hit a bridge. [Star-Ledger]

Nutella eatery opens: A cafe dedicated to the sweet spread opened in Union Square. And yes, it has a selfie wall. [Bustle]

Nutella history: In 2013, Columbia University rationed Nutella after students kept stealing it from the cafeteria. Then there were the 2018 Nutella riots in France.

8. Looking for things to do?

Check out the going-out guides from The Times, covering the whole week.

9. Metropolitan Diary: On an Empty A Train

It was a sweltering summer day, and I was on an empty A train with my bicycle, heading to Brooklyn.

An older woman with maroon scarf and a drawing tablet sat across from me, eyes down at the pad.

I love watching people do what they love, so I stole a glance at her and her artwork.

She met my eyes and grinned.

She was drawing me.

At least they’re not stuck by the copier machine all day, right? More on the group’s latest performance, is on its website.

Have a great morning.

US Democrats eye a vice-presidential consolation prize for women

Man in his 20s dies of gunshot wounds in London
Asia