(Want to get New York Today by email? Here’s the sign-up.)

Snowvember record: The 6.4 inches that fell in Central Park was the biggest one-day November snowfall in at least 136 years.

1. Your commute may be a nightmare again 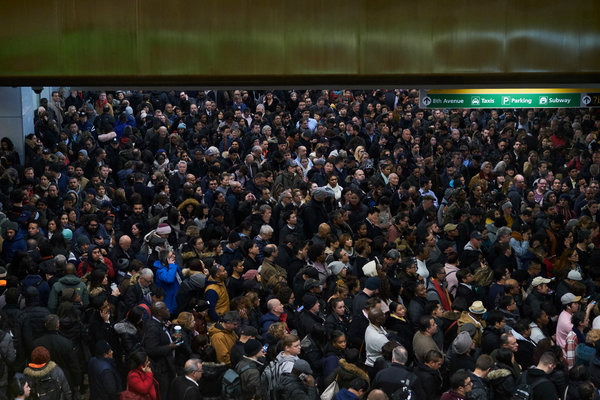 Brace yourself. Last night’s snow could be this morning’s delays.

Subways are running fine in the city, but as of 6 a.m. city buses are delayed systemwide, two New Jersey Transit train lines are suspended, and there are widespread lags in transit throughout the region.

In the city, the snow on roads is mostly melted. The sun will slowly poke through the clouds and temperatures will climb up to 44 degrees. A small relief — but wind gusts could reach 36 miles per hour.

Here’s how the commute is shaping up:

Other bus lines: DeCamp buses are suspended. Check with your carrier.

In Thursday’s New York Today, we said the weather wouldn’t be so bad. But it was, and it caused chaos.

On Thursday night, the Port Authority Bus Terminal was too crowded to enter. New Jersey and Long Island trains were delayed in every direction.

Traffic in much of the region stopped dead.

A bus full of special education students in the city was reportedly stuck for 10 hours. It took a city councilwoman nearly nine hours to drive home to the Bronx from Manhattan.

Also, at least 15,000 public-housing residents in the city lost heat and hot water.

What happened: Weather patterns changed and snow piled up, turning the roadways into slick slush trails.

I also didn’t remind you how finicky weather is this time of year, because I didn’t want it to be true. Blame Old Man Winter. Blame me.

2. Fares might go up. Service is going down. (That’s the good news.)

New: M.T.A. officials on Thursday announced details of proposed fare increases that they plan to enact in March.

To make matters worse, they warned of an additional 15 percent fare increase to plug a growing budget deficit. And yes, the fare increases may come with service cutbacks.

No wonder Jeff Bezos negotiated to get his own helipad.

What the M.T.A is considering:

Option one: Eliminate the bonus for buying a pay-per-ride MetroCard, effectively increasing those costs by 5 percent.

Option two: Increase the bonus for pay-per-ride MetroCards (buy 10 rides, get one free).

Base fare: Increase to $3

Analysis: Your ride will get worse.

Threats of a 15 percent fare hike are rooted in reality. Uber, Lyft and unreliable M.T.A. service are combining to push down ridership.

He’s going to be under pressure now to put together a new rescue package and to get the Legislature involved. And the Legislature is now completely controlled by Democrats, the party he leads.

In August, Mr. Cuomo promised, “I would support canceling the fare hike because the service is not what people deserve.”

But that was when he was campaigning for re-election.

That’s the number of fast-food jobs in New York City as of October, according to the Federal Department of Labor, The Times’s Patrick McGeehan explains.

Context: That’s down slightly from September, when the figure was 102,400. Fast-food jobs had hit new highs for six straight months before slipping a bit in October.

Why it matters: Employment in fast-food joints (the feds call them limited-service eating places) is considered the best gauge of the effect of the rising minimum wage.

5. Can you support the Amazon deal, and be a progressive?

Colleagues J. David Goodman and William Neuman look at Mayor Bill de Blasio, who casts himself as a progressive champion.

“Yet Mr. de Blasio’s positions on real estate development, including his efforts to rezone large areas of New York City, have often put him in direct conflict with his political base, and stretched the distance between his rhetoric and the reality of governing.”

In an interview, Mr. de Blasio said blocking the Amazon deal would be a “huge mistake.”

6. What else is happening

Personal politics?: A city councilman who is pushing to abolish the position of public advocate is married to a woman who once sought to work there. [NY Post]

Amazon deal: An incoming state senator who previously worked in the Cuomo administration likened the Amazon deal to a “bribe.” [NY Post]

7. Looking for things to do?

Check out the going-out guides from The Times’s culture pages, covering the whole week.

I was lucky to get a seat at Rite-Aid, where I was waiting in line to get a flu shot. An older couple ahead of me were being quizzed by the clerk who was reading from the Medicare paperwork. There was a section that required the listing of an emergency contact should things not go well during the procedure.

Watching them, I made two assumptions. First, that they were married; second, that each had listed the other as emergency contact.

The man collecting the paperwork, who must have gone through this routine a thousand times, turned to the woman.

“You didn’t fill in the blank describing your relationship to the person you’ve identified as your emergency contact,” he said somewhat mechanically. “What is that relationship?”

The woman took a short breath.

He’s the shortest one, obviously. (Thank you, Our Lady of Mt. Carmel, for providing the photo.)

This Saturday, Nov. 17, is, literally, Mr. DeVito’s day in Asbury Park, where he was born and raised.

In April, the mayor and governor announced that they were honoring Mr. DeVito.

He celebrated the occasion by talking to our New Jersey correspondent Nick Corasaniti (a fellow “jadrool from Jersey,” he called him).

The actor said “there’s a little bit of Jersey” in everything he does.

So when power brokers in New Jersey said they wanted to honor Mr. DeVito, he knew how it would go.

Enjoy your Friday, you celebrity.

‘She Asked Where I Was Headed. Just Wandering, I Said.’

Monkees bandmates pay tribute to bassist Tork after death at 77