Home » Americas » New York Today: We Like Big. Are Google and Amazon Too Big?

Living and working in New York have ingrained in most of us a certain laissez-faire attitude to things big and grand. The transit system with more stations than anywhere else in the world … yet not enough. The most populated school system … yet we don’t always have enough seats for every student. The most celebrated pizza in the country … and yet we continue to try new styles.

This week, New York appeared on the verge of landing a few more big things. Two of the tech industry’s giants signaled an interest in expanding here, potentially bringing a combined 45,000 employees to Manhattan, where Google already has an office, and Queens, where Amazon is considering locating a headquarters.

First, a caveat: No deals have been completed, so we don’t know how many people these companies will employ in New York. Google has 7,000 employees in Chelsea, and that number could double if it moves into 1.3 million square feet of office space in the West Village. Amazon could bring up to 25,000 employees to Long Island City.

Tom Angotti, professor emeritus of urban planning at Hunter College, said he could not recall a period when New York planned to absorb so many workers from a single employer, let alone two.

These tech giants will undoubtedly help reshape the city. New York can handle big. But is this too big? Probably not. New York will be fine. If that seems a little nonchalant, it’s a well-earned attitude.

“It’s a lot, but it’s not a lot for New York’s overall economy,” Nicole Gelinas, an analyst at the Manhattan Institute, said.

New York City gained 71,900 jobs from September 2016 to September 2017, according to the New York State Department of Labor. Many cities wouldn’t be able to absorb that many jobs. But New York can.

And remember, we’re talking about a possible maximum of 45,000 jobs. “We shouldn’t be dismissive of this number,” Gelinas said. “But it’s not going to save us or break us either way.”

Here’s what else is happening:

Leave the suede shoes at home and take an umbrella to work. Showers are possible after 4 p.m. Expect a high of 52.

?The sun will come out tomorrow. ?Eventually. 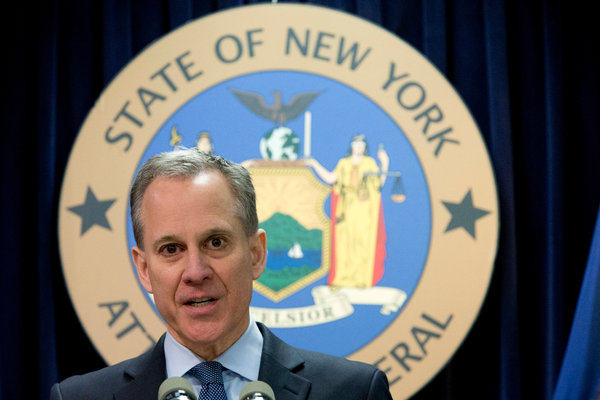 Mayor Bill de Blasio is having a rejuvenation after Democrats took both houses in Albany, prompting him to press for agendas that were stymied in the past. [New York Times]

A sweeping retrospective shows the personal side of Andy Warhol — his hopes, fears, faith — at the Whitney Museum in a reassertion of his power for a new generation. [New York Times]

Attention passengers: Subway conductors will have new and informative lines to announce to riders that will appeal to your attention. [New York Times]

You may have seen the fliers around the city. Now, the people behind the #WhyIDidntReport campaign have opened up a gallery-style pop-up. [am New York]

The duck saga continues. It has returned. [New York Post]

An evening of jazz at the Lighthouse at Kingsborough Community College in Manhattan Beach, Brooklyn. 7 p.m. [$42]

A screening of the film “Infinite Football,” about a Romanian soccer player’s quest to make the sport safer, at the Museum of the Moving Image in Astoria, Queens. 7:30 p.m. [$15]

See a performance of “The Education of Al Capone as if Told by Jimmy Durante,” at Coney Island U.S.A. in Coney Island, Brooklyn. 8 p.m. [$30]

An evening of Korean percussion music at Flushing Town Hall in Queens. 8 p.m. [$16]

GingerBread Lane is back. Take a look at the homemade houses at the New York Hall of Science in Flushing Meadows Corona Park, Queens. 10 a.m. to 6 p.m. [$16]

Ahead of Veterans Day, take a military history tour of the Battle of Brooklyn and visit the grave sites of fallen soldiers beginning at the Evergreens Cemetery in Bushwick, Brooklyn. 11 a.m. [Free] …

… Or take a tour focused on the gentrification and development of Downtown Brooklyn beginning at Jay Street and Myrtle Avenue. Noon. [$10]

Visit the exhibition “Transfer Queen,” a collection of poems and illustrations about men on the subway, at Wayfarers in Bushwick, Brooklyn. 1 to 5 p.m. [Free]

Bring your pumpkins and jack-o'-lanterns and smash them into compost at the Pumpkin Smash at Corlears Hook Park in Lower Manhattan. 10 a.m. to 1 p.m. [Free]

Firecrackers, sweets, dancing and clay light painting are part of the Diwali celebration at the Queens Museum in Flushing Meadows Corona Park, Queens. 1 to 4 p.m. [$8]

A discussion with the author of “To Honor Fallen Heroes: How a Small, German-American Village in New York City Experienced the Great War,” about the more than 650 men from College Point, Queens, who served in World War I, at the Queens Historical Society in Flushing. 2:30 p.m. [$5]

Get a look inside artists’ studios at Red Hook Open Studios. At various locations. 1 to 6 p.m. [Free]

It was 1979, and I was driving a Checker cab. I picked up a fare at La Guardia Airport. He was a heavyset man who appeared to be in his 50s.

He was flushed and smelled of alcohol. In an angry voice, he gave me detailed directions to his apartment in Manhattan.

Halfway there, bouncing along on the B.Q.E., I noticed that he was slumped over in the back seat. Ten minutes later, I pulled up to his building. He didn’t move.

I got out of the cab, opened the door and tapped the man. No response. Then I shook him. Nothing.

I quickly drove to a hospital, parked and ran in. A few people were hanging around, and for a moment I wondered if there was a line. Then I yelled that I had a dead passenger in my cab.

Within seconds, he was on a gurney, and from there into the emergency room, where a doctor ripped his shirt open.

A police officer arrived, asked me some questions and walked away.

An orderly asked if I was doing O.K. I said I was. Then he asked me out. I declined, but thanked him as well.

I drove the cab back to the garage in Long Island City, noting the death on my trip sheet.

The dispatcher, sitting in the office behind bulletproof glass, bored and tired, looked at my note.

Hi everyone, it’s Alexandra and Jonathan.

Almost three years ago, when we took the helm of New York Today, we told you of our resolutions to walk every city street from east to west and to trek every avenue from top to bottom.

More than 700 columns later, thanks to you — with your ideas, loyalty, feedback and encouragement — we’ve seen New York City through the most special lens there is.

We’ve reported on happenings at City Hall, corruption in Albany and how the chaos in Washington very deeply affects our home. We’ve covered the transit turmoil, the cases in our courts and the breaking news that drives each day.

But we’ve realized that the stories that resonate just as much as policy and politics are those about the resilience and kindness of people in our community.

Through our annual New Yorkers of the Year columns, we’ve met hundreds of neighbors — teachers, violinists, actors, firefighters, survivors, refugees, immigrants and citizens — who have made a difference here, in ways big and small. We’ve learned from New Yorkers over the age of 100, some who are no longer with us, about what it means to be engaged in this city, and how to do it.

And we’ve also come to understand, in a place as intense as this one, the importance of stories that make you smile, laugh or feel something. (Like “hair forecasts” on rainy days. Or disputes over what makes a New York bagel. Or reviews of public restrooms. Or why New Yorkers do, indeed, wear so much black. Or why the best place to be for the holidays is alone in our great city.)

So thank you for reading us as you rolled out of bed, for letting us join you for your morning cup of joe, for using us as a distraction when you were stuck on the subway, and above all, for believing in the power and beauty of local journalism.

We hope you’ll continue to do the same with our talented new columnist, Azi Paybarah, who officially takes over this column on Monday.

New York Today is a morning roundup that is published weekdays at 6 a.m. If you don’t get it in your inbox already, you can sign up to receive it by email here.

You can find the latest New York Today at nytoday.com.