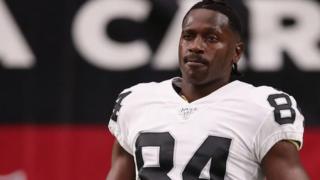 American football star Antonio Brown has been accused of rape by his former personal trainer.

Britney Taylor, who decided to forgo her right to anonymity, said Mr Brown sexually assaulted her on three occasions, according to a civil lawsuit she filed.

He has denied the allegations.

The complaint says that the two met at a bible study class in 2010.

Mr Brown later hired Ms Taylor, who is a gymnast, in 2017, to improve his flexibility.

However, according to the lawsuit, he sexually assaulted her twice in training sessions in June 2017, and she stopped working with him.

The lawsuit reads that Mr Brown “reached out to Ms Taylor, expressing contrition, begging forgiveness and pleading with her to train him again”.

It says she reluctantly agreed but in May 2018 he raped her.

“Mr Brown denies each and every allegation in the lawsuit”, his lawyer, Darren Heitner, said in a statement. “He will pursue all legal remedies to not only clear his name but to also protect other professional athletes against false accusations.”

Mr Heitner added that “any sexual interaction… was entirely consensual”.

Mr Brown has been in the press this week after publicly demanding on Twitter that the Oakland Raiders release him and later receiving a reported $9m (£7m) signing bonus for the New England Patriots.

The Patriots are playing the Miami Dolphins on Sunday and it is not clear if he will be on the team.

The Patriots said in a statement, in response to the lawsuit: “We take these allegations very seriously.

“Under no circumstances does this organisation condone sexual violence or assault… We will have no further comment while that investigation takes place.”