Home » Americas » No Place to Go When You Need to Go? These New Yorkers Have Ideas

Kyle was jogging along the paths of East River Park one afternoon when he felt something shift.

He peeled off from his friends to find a bathroom in the Manhattan park, but the nearest one was locked. After running half a mile north to the next bathroom, he knew that time was running out. His apartment in Kips Bay was now two miles away, and he couldn’t hold it much longer. He ran back to the first bathroom, where he knew there was a large bush.

“There were quite literally like, plenty of people riding bikes and biking past the bush where — I hope — they couldn’t see me,” Kyle said. “But I pooped.”

Kyle, a 25-year-old medical student who asked to use only his first name while talking about an embarrassing episode, is not alone in his struggle to find a public bathroom.

As New York reopens and more people are flocking outside, the lines for public restrooms have become especially unwieldy. There are roughly 1,160 public bathrooms for New York City’s eight million residents, and the pandemic has exacerbated people’s frustrations with these facilities, which are often dirty, hard to find, out of order, or simply not enough in number to accommodate city crowds. 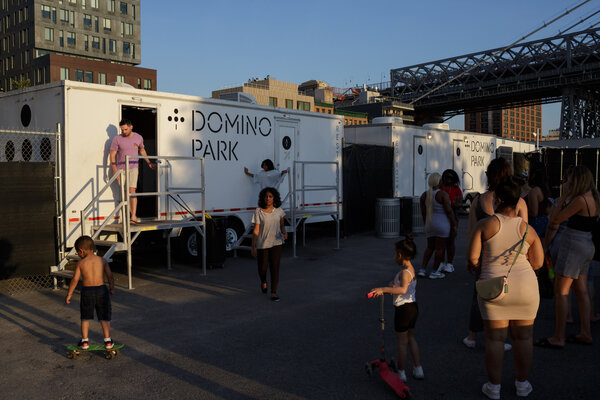 Those 1,160 bathrooms are mainly found in public parks, subway stations, city buildings like libraries, and public pools, according to “The Need for Public Bathrooms,” a 2019 booklet by Julie Chou, Kevin Gurley and Boyeong Hong, architects and urban planners, who surveyed the state of New York’s facilities.

“We focused on homelessness in the public realm, and what emerged was a need for bathrooms,” Mr. Gurley said. “It all came from a perspective of homelessness — people living out on the streets — and understanding their bathroom needs.”

The Parks Department is the largest provider of public bathrooms in New York. Mark Focht, the deputy commissioner of the Parks Department, said the recent bathroom lines are partly because many of the older park facilities are smaller.

“We’re asking the public to respect social distancing and some level of capacity in our comfort stations,” Mr. Focht said. “They were never designed for a pandemic.”

The pandemic-inspired push to reimagine New York’s public spaces has also highlighted this issue, Ms. Chou said: “Public open space is a big conversation right now because of Covid, but the public bathroom has to be part of that conversation if you’re going to expand our public space.”

Some of the city’s better public bathrooms have earned loyal fans. Betsy Ladyzhets, a 24-year-old resident of the Bedford-Stuyvesant neighborhood of Brooklyn, said two of her favorites are Bryant Park in Manhattan and McCarren Park in Brooklyn.

“I think about the bathroom in Bryant Park,” Ms. Ladyzhets said, “a very insanely bougie bathroom where they have classical music playing.”

Still, the number of stalls is an issue. “It’s also like three stalls in that area of Midtown,” she said, “which means I’ve been there when there’s been a huge line to get into the bathroom.”

In popular parks like Central Park and Prospect Park in Brooklyn, where tens of thousands of people gather on summer weekends, the lines have caused some New Yorkers to get creative.

“As more and more of my friends have become vaccinated, we’ve been aggregating in Prospect Park,” said Hannah Seidlitz, 23, who uses they/them pronouns. “I think it’s one of the worst bathroom-deficit places, because it always feels like there are 10 million people there but there’s literally one public bathroom that people know about.”

As an alternative, some park visitors would try to find restrooms to use at nearby restaurants and stores, but during the pandemic many places closed their facilities to the public.

“It’s been hell, especially during this pandemic,” said Aria Pinto, a 24-year-old teacher who lives in Bedford-Stuyvesant. “A lot of cafes that used to let you use their facilities for free, they don’t want you to do that anymore.”

Even before the pandemic, it could be a struggle to find an open bathroom. Ms. Chou, an architect who worked on the booklet, said that as they surveyed the five boroughs, it was clear there were not enough options.

“I think the biggest surprise, between the three of us, was finding out that there’s only two to four public bathrooms that are open 24 hours a day,” Ms. Chou said. “So we’re a city that is operating 24/7, but you’re not going to be able to find a public bathroom at night unless you access the bars.”

Typically, Ms. Chou said, the only public bathrooms that are open overnight are the ones at Penn Station and Port Authority Bus Terminal. This is especially problematic for the city’s homeless population, she said.

Besides the Parks Department, several city entities also operate public bathrooms, including the New York Police Department, the New York Public Library and the M.T.A., which maintains roughly 80 bathrooms in its 472 stations. Though these bathrooms add to the city’s count, comparable cities like London have found more creative ways to expand their public toilet systems; according to Ms. Chou, London’s borough of Richmond has roughly one toilet for every 300 people thanks to their community toilet scheme. (If New York City had the same ratio of toilets to people, that would be 28,000 toilets.)

Part of the problem is also that there’s no consistent signage pointing people to New York’s bathrooms.

Mr. Gurley, an urban planner who worked on the booklet, said that in addition to being poorly labeled, many of the public bathrooms around the city are also not well-maintained, making them people’s last resorts.

It doesn’t have to be this way, Ms. Chou and Mr. Gurley said: In Japan, star architects designed glowing public bathrooms that light up the street. London and Germany each have public bathrooms networks that collaborate with private businesses, and London created the Great British Public Toilet Map to make locating bathrooms even easier. In Singapore, LOO awards go to the best restroom cleaners.

Bailey Carlin, 26, said he redesigned his jogging route in Brooklyn to pass by the Domino Park bathrooms on the Williamsburg waterfront, which are miles away from his home in Bushwick, in order to make sure he passes usable bathrooms while he’s out.

“About a month ago,” Mr. Carlin said, “I found myself in need of a bathroom on a run and that resulted in me having to hop one of those painted green barriers that they have around construction zones to use one of their porta potties.”

“Which was definitely a humbling and embarrassing experience,” he said,” as there were a bunch of people at brunch in Williamsburg across the street.”

Mr. Carlin said he’s also had trouble in Central Park. On a recent afternoon, he said he resorted to relieving himself behind a tree while visiting with friends: “I was in a panic about it because the bathroom line was so ungodly long.”

Until there are more public bathrooms, some New Yorkers said they will continue peeing in bushes or behind trees and cars. Mx. Seidlitz, who plans to continue meeting friends in the parks this summer, said the lack of bathrooms can’t deter them.

“I’ve just become more comfortable peeing outside,” Mx. Seidlitz said. “I’ve had to become more confident being like, look — if some dad and his daughter on a tricycle go by me while I’m peeing behind this big rock in Prospect Park? So be it.”

Victorina Morales Spoke Out Against President Trump. What Price Will She Pay?

Man killed by own gun booby trap at Maine home