Mexican officials say the attack on the Mormon family may have been a case of mistaken identity. 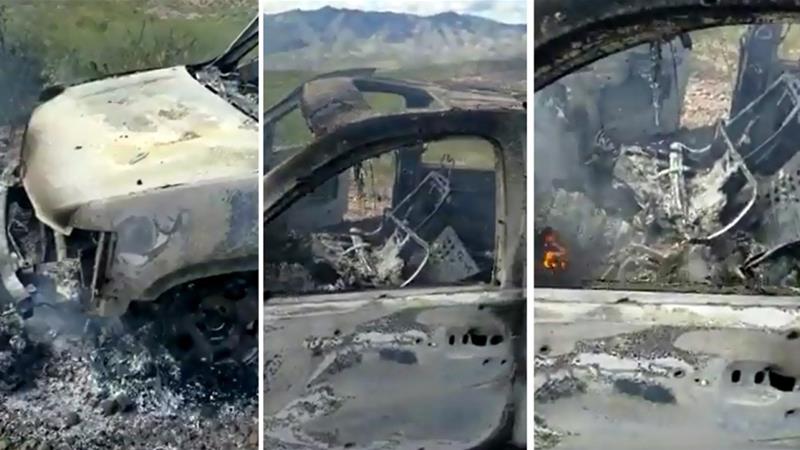 At least three women and six children, all apparently US citizens, were killed by drug cartel gunmen in northern Mexico, officials said on Tuesday. Six children were found alive, one child had a bullet wound and one child was still missing.

Mexican Security Secretary Alfonso Durazo said the gunmen may have mistaken the group’s large SUVs for rival gangs. He said at least five children have been taken to Phoenix, Arizona, in the United States for treatment.

The victims belonged to the LeBaron family who live in the decades-old La Mora settlement in Sonora state. The community was founded as part of an offshoot of The Church of Jesus Christ of Latter-day Saints, also known as the Mormon church.

Security officials said the attack on Tuesday which occurred on a dirt road between Chihuahua and Sonora states, which border the US.

The slaughter of US citizens on Mexican soil quickly became an international issue, with US President Donald Trump tweeting, “This is the time for Mexico, with the help of the United States, to wage WAR on the drug cartels and wipe them off the face of the earth.”

President Andres Manuel Lopez Obrador refused that approach, saying at a Tuesday news conference, “The worst thing you can have is war.”

“We declared war, and it didn’t work,” Lopez Obrador said, referring to the policies of previous administrations. “That is not an option.”

Lopez Obrador’s strategy has faced criticism in recent weeks, however. Two weeks ago, Mexican troops had to release a drug lord after his supporters mounted armed attacks in Culiacan, Sinaloa.

Trump said the US “stands ready, willing and able to get involved and do the job quickly and effectively”.

Lopez Obrador said on Tuesday morning he would talk to Trump about possible cooperation on security, provided Mexico’s sovereignty were upheld.

However, Lopez Obrador noted he did not believe that foreign intervention would be necessary to deal with such cases.

A relative of the victims told the Associated Press that members of the community had been travelling in a convoy of three vehicles when the attacks occurred. The relative, who was not named for fear of reprisal, speculated that the incident could be a case of mistaken identity.

Julian LeBaron, another family relative, described the incident as a “massacre”, saying in a text message to Reuters News Agency that some family members were burned alive. He added other injured members of the family were being transported to Phoenix, Arizona, in the US for treatment.

Several children who fled the attack were lost for hours in the countryside before being found, he added.

A video posted on social media showed the charred and smoking remains of a vehicle riddled with bullet holes that was apparently carrying the victims when the attack happened.

“This is for the record,” said a man’s voice in an American accent, off-camera, choking up with emotion.

“Nita and four of my grandchildren are burnt and shot up,” he added.

The video could not independently be verified.

Chihuahua and Sonora state governments issued a joint statement saying an investigation had been launched and that some people were presumed dead and others missing.

The statement noted additional federal and local security forces were being sent into the area near the border between the two Mexican states, but did not provide further details.

Mormons of Germanic origin settled in northern Mexico in the 1920s after moving from the US, where the religion was founded. The group broke away from the mainstream Mormon church when it abandoned polygamous marriages.

It’s not the first time that members of the break-away religious community had been attacked in the region.

In 2009, Benjamin LeBaron, an anti-crime activist who was related to those killed in Monday’s attack, was murdered along with his brother-in-law in neighbouring Chihuahua state. Mormons in the region have also previously suffered widespread kidnapping.

US Ambassador to Mexico Christopher Landau, who travelled to Sonora earlier on Monday for unrelated work meetings, said he was following the incident closely.

“The security of our co-nationals is our great priority,” he said on Twitter.