It’s Thursday — and it is World Poetry Day! Enjoy these recommendations from David Orr, who writes the On Poetry column for the Book Review.

Weather: Grab the umbrella. Expect rain early in the day, throughout the afternoon and into the evening. 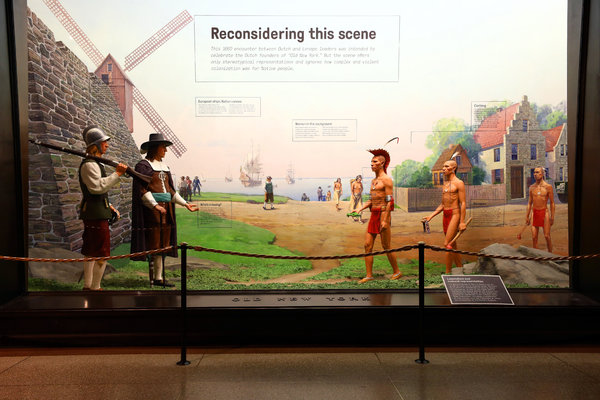 Visiting the American Museum of Natural History often feels like a New York rite of passage, whether you’re a student on a field trip, a tourist escaping the rain or a 20-something taking a hiatus from the Bushwick scene.

For decades, the museum has educated and entertained. But now it is acknowledging that some of its exhibits have also offended.

One of the solutions: labels.

What is happening at the museum?

Critics said the diorama depicted cultural hierarchy, not a cultural exchange. The women did not wear impractical skirts that dragged behind them. Canoes would have been in the water next to the European ships.

To address that, the museum added 10 labels, identifying problems with the diorama and correcting the record.

What prompted the change?

The labels were quietly added in October, after three years of protests from Decolonize This Place, a group urging institutions to acknowledge how marginalized people were represented. The museum consulted with outside experts but not the protest group.

Amin Husain, a visual artist and member of Decolonize This Place, said the labels work on this diorama “because it honors the fact that that was there to begin with, so it references the harm that has been perpetuated over the years. And then it says, ‘We’re going to tell you how that was wrong.’”

The group has said that more needs to be done. It has asked the museum to re-evaluate other exhibits and to move a statue of Theodore Roosevelt outside the building.

“That has a Native figure and an African figure subjugated to a Roosevelt president, on a horse,” Mr. Husain said. “Put it in the museum itself, and then label it.”

Natasha Singh, 34, another visual artist and member of Decolonize This Place, said she wanted to see “complete systematic changes of the museum.”

What else in town should be changed?

A lot, Ms. Singh and Mr. Husain said. They are not alone.

When city officials discovered that there were only five statues depicting real women in public spaces, they rushed to plan at least five more.

Last year, focus turned to a statue of a 19th-century surgeon who conducted experimental operations on female slaves. It was moved from Central Park to Green-Wood Cemetery in Brooklyn, where the surgeon was buried.

No other dioramas at the American Museum of Natural History are immediately slated to get new labels, but a review is underway of its Northwest Coast Hall, according to a museum spokesman.

A Times report on museums delves into exhibits you won’t want to miss, as well as spaces that might fly under the radar. Here are three highlights:

• A terra cotta trumpet shaped like a jaguar. Keyboard instruments small enough to fit in carry-on luggage. You can find them in “Mapping the Art of Music” at the Metropolitan Museum of Art.

• During the American Revolution, a house on Long Island was a nexus of activity. Today it’s a museum of wartime espionage.

• At the Museum of Natural History’s blockbuster exhibit on the T. rex, fiberglass, resin, feathers and glue help bring the dinosaur to life.

The subway’s “cursed” lettered lines are indeed worse than the numbered ones.

Speed cameras will surround every city public school. The Legislature voted to expand the number of protected zones.

Lawyers say immigration hearings in New York are being rescheduled without notice. [Documented]

Homeless families are staying in shelters for longer periods, compared to just a few years ago. [Gothamist]

Only 55 percent of New York City voters said they felt as if they could afford to live here, according to a recent poll. [Quinnipiac University]

One of the nation’s first four-year college programs in canine training and management is being offered upstate. [Wall Street Journal]

The Flushing Town Hall in Queens celebrates Women’s History Month with “Lady Got Chops,” a music and arts festival. 7:30 p.m. [$16]

The author Sohaila Abdulali and the filmmaker Vaishali Sinha discuss rape culture in “Ask a Feminist,” at the Open Society Foundations in Manhattan. 6 p.m. [Free]

And finally: A feminist ghost tour

The writer Shirley Jackson, whose book “The Haunting of Hill House” was adapted for a Netflix series, used to live on Grove Street.

Aaron Burr’s daughter, Theodosia, whose remains were never found after a shipwreck, once lived on Barrow Street.

The actress-turned-psychic Jan Bryant Bartell often said there were ghosts in the house she occupied on West 10th Street.

And this week, the writer and entrepreneur Andrea Janes was in her basement when a strange noise erupted. “Pardon me, I am doing laundry at the moment and if that noise is scaring you, it’s just the machines,” she said.

Years ago, Ms. Janes founded a company that gave walking tours of historical New York, focused on the macabre. Now she is giving a tour with a feminist focus.

“It began to occur to me that there are a lot of women’s history threads running through specifically my Greenwich Village ghost tour,” she said in an interview.

She called it a feminist ghost tour.

New York City has no shortage of women’s history to ponder.

Gertrude Treadwell, who died in 1933, is said to haunt her old house on East Fourth Street and “is very tied to her identity as a spinster and as a homeowner,” Ms. Janes said.

There’s Rose Butler, whose execution in Washington Square is a popular story on many ghost tours. (This July is the 200th anniversary of her killing, according to one historical society.)

“Was she innocent, as people report? We don’t know,” Ms. Janes said. “And what does it mean that she is used as a kind of figure on ghost tours to deliver scares to tourists?”

Near the park is the site of the Triangle Shirtwaist Factory fire of 1911, which killed 146 workers, many of whom were young immigrant women. “Women continue to do so much labor and are so underrepresented and underpaid,” Ms. Janes said.

People may be “surprised by the juxtaposition of feminism and ghosts,” she said. But it all fits. “Traditionally, what’s more terrifying than a woman, this incomprehensible maelstrom of emotion and strange physical powers?”

More information about Ms. Janes’s “Ghostly Women of Greenwich Village” tour, which will take place on Saturday, is available on her website.

I was supposed to meet a friend to pick up a dress she was altering for me. We were going to rendezvous in the middle of the No. 1 subway at West 79th Street. She was coming downtown from Washington Heights on her way to work.

When the train pulled into the station, I looked up and down the platform to find her, but I didn’t see her.

The train operator poked his head out the window. His smile was as bright as the sun.

“Who are you looking for?” he said.

He got on the public address system.

“Will Jackie please step out of the door of your car so your friend can find you?” he said.

Jackie stepped out. I saw her, and we hopped back on the train together.

The train operator made another announcement: “Jackie and her friend found each other. That’s good.”

People on the train were laughing and smiling. Jackie gave me the dress, and I got off at the next station.

I ran up to the train operator to thank him.

“You see that musician over there?” he said, pointing to a guy on the platform playing a keyboard. He handed me a $5 bill. “Give him this.”

The train began to leave the station.

“How’re you doing, my man?” the train operator yelled as he pulled away.