WASHINGTON — For weeks, Michael Fanone, a Washington police officer who was seriously injured during the Jan. 6 Capitol riot, had asked to meet privately with Representative Kevin McCarthy of California, the top House Republican, to discuss the assault, to no avail.

So on Friday, when Officer Fanone finally got his session with Mr. McCarthy at the Capitol, he had a clear request at the ready: for the minority leader to publicly denounce the lies Republican lawmakers have been telling about the deadly attack. He wanted Mr. McCarthy to push them to stop downplaying the storming of the building, blaming left-wing extremists for an assault carried out by former President Donald J. Trump’s right-wing supporters and spreading the baseless conspiracy theory that the F.B.I. secretly planned it.

He came away disappointed.

“He said he would address it at a personal level, with some of those members,” Officer Fanone told reporters after the roughly hourlong meeting. “I think that as the leader of the House Republican Party, it’s important to hear those denouncements publicly.”

Mr. McCarthy, who phoned Mr. Trump during the riot to plead with him to call off the mob and days later said the president bore responsibility for the rampage, has since swung wildly in the other direction. He later said Mr. Trump was not to blame, led the charge to purge Representative Liz Cheney of Wyoming from the party leadership for speaking out against the former president and rallied his party to oppose the formation of an independent commission to investigate the assault.

Aides to Mr. McCarthy did not respond to repeated requests for comment about the meeting, or Officer Fanone’s weekslong effort to arrange it. Mr. McCarthy said on Wednesday that the officer, who has been speaking openly for months about his desire to sit down with the top House Republican, had “unfortunately” neglected to “follow up” to schedule it — an assertion that Officer Fanone dismissed as untrue, using a barnyard epithet for emphasis.

But Officer Fanone’s account of their conversation matched what Mr. McCarthy had told reporters before the private session, when he suggested that he might talk to some of his members privately about their comments but would not criticize them openly or take issue with their votes.

Officer Fanone’s effort comes as some far-right House Republicans have spread misinformation about the riot, sought to portray it as a mostly peaceful event and voted against honoring police officers who responded.

One House Republican accused a U.S. Capitol Police officer of “lying in wait” to carry out an “execution” of a rioter. And 21 House Republicans voted last week against a bill to award Congressional Gold Medals to the officers who defended the Capitol Jan. 6.

“I asked him to denounce the 21 House Republicans that voted against the Gold Medal bill, recognizing my co-workers and colleagues that fought to secure the Capitol on Jan. 6,” Officer Fanone said. He said he had also asked that Mr. McCarthy publicly disavow a comment by Representative Andrew Clyde, Republican of Georgia, comparing the events of Jan. 6 to a Capitol tour.

“I found those remarks to be disgusting,” said Officer Fanone, who was beaten unconscious and subjected to a Taser by the mob, suffering a heart attack and a brain injury. “I also asked him to publicly denounce the baseless theory that the F.B.I. was behind the Jan. 6 insurrection.” 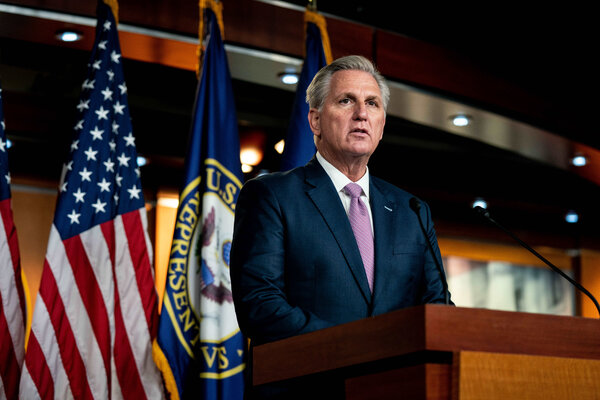 As of Friday evening, Mr. McCarthy had done none of those things.

Jan. 6 was, in reality, a violent and tragic day at the Capitol. Urged on by Mr. Trump’s lie of a stolen election, rioters stormed the Capitol, where Congress was meeting to formalize Mr. Biden’s victory. They chanted “Hang Mike Pence,” threatened to shoot Speaker Nancy Pelosi and forced lawmakers to evacuate the building in a scene of terror and mayhem.

Afterward, police officers recovered long guns, Molotov cocktails, explosive devices and zip ties. District of Columbia police officers were called in to help as the Capitol Police force was overrun. Ultimately, nearly 140 officers were injured and at least seven people died around the time of or in connection with the riot, including two officers who took their own lives.

Some officers without helmets suffered brain injuries, one officer had two cracked ribs, two shattered spinal discs, and another was stabbed with a metal fence stake, according to the union that represents the Capitol Police.

Joining Officer Fanone for the meeting with Mr. McCarthy on Friday were Officer Harry Dunn of the Capitol Police, a Black officer who has spoken publicly about the bigotry, violence and trauma he endured as the mob yelled racist slurs at him, and Gladys Sicknick, the mother of Officer Brian D. Sicknick, who died of a stroke after battling the rioters.

Officer Dunn said Mr. McCarthy had committed to the group that, now that Speaker Nancy Pelosi has said she will move to create a select committee to investigate the riot, he would take seriously the appointment of its Republican members.

“He did commit to taking it serious, once he heard from the speaker about it,” Officer Dunn said.

But Officer Fanone said the Republican strategy appeared to be to try to make the public forget about the attack as the party looked to retake the House in next year’s midterm elections.

“When you’re that obsessed with gaining power that you’re wiling to trample over a bunch of police officers, that’s sickening,” he said in an interview.

The tense back-and-forth between Mr. McCarthy and Officer Fanone has underscored how Republicans, who for decades have portrayed themselves as the party of law and order, have found themselves torn since the riot between backing law enforcement and their loyalty to Mr. Trump.

Democrats have sought to capitalize on the divide. Robyn Patterson, a spokeswoman for Ms. Pelosi, said on Friday that Mr. McCarthy met with the officers only because he was “forced by a public pressure campaign.” She called it “the latest example of House Republicans’ growing contempt for police and law enforcement officers who keep us safe.”

Officer Fanone said he had no desire to keep returning to the Capitol, but wanted Republicans to stop denying the truth of what happened there.

“This experience for me is not something that I enjoy,” said Officer Fanone, who has been on leave since the riot. “I don’t want to be up here on Capitol Hill — I want to be with my daughters. But I see this as an extension of my service on Jan. 6.”

US embassies still hoisting rainbow flags, despite advisory from Washington

Argentina Legalizes Abortion, a Milestone in a Conservative Region