Ole Anthony, a former Air Force intelligence specialist and Texas political operative who found Jesus in 1972, built a following among the down-and-out of east Dallas, and then used that movement to take down a rogue’s gallery of unscrupulous televangelists and faith healers, died on April 13 at a house in Dallas that he shared with several members of his organization, the Trinity Foundation. He was 82.

His death was confirmed by Pete Evans, a Trinity member who, like Mr. Anthony, had taken a vow of poverty before acquiring a private investigator’s license, which let him peer deeper into the lifestyles of rich and famous preachers.

Mr. Evans said that the cause had not been determined, but that Mr. Anthony had been in declining health since breaking his hip in 2020.

A tall, blond, irascible son of Norwegian immigrants with an ever-present pipe, Mr. Anthony resembled both an Old Testament prophet and an Old West prospector — a fitting look for a man who, like a latter-day Jeremiah, believed it was his job to call out religious scam artists, especially those who had grown wealthy off their congregations.

“The message of most television evangelists makes God an instrument of instant gratification,” he said in a 1987 interview with The Chicago Tribune. “These sellers of doves in the sanctuary are an embarrassment to any sincere believer and to the name of God.”

He specialized in what he called garbology — rooting through dumpsters for evidence of legal or spiritual fraud by televangelists like Robert Tilton, Benny Hinn and W.V. Grant, just three of the more than 300 he went after during his nearly 35-year campaign.

He compiled the results in long reports that he fed to reporters, and he made frequent appearances on shows like “Primetime Live” and “Inside Edition.” His work was largely responsible for the implosion of Mr. Tilton’s $80 million-a-year empire and Mr. Grant’s 1996 imprisonment for tax evasion. In 2007, he worked with the U.S. Senate Finance Committee in its own investigation into televangelists.

Mr. Anthony did not act alone. His movement was a community with a core of about 50 followers who lived in adjacent homes in a run-down neighborhood of East Dallas. They took meals together and joined Mr. Anthony in often obscenity-laced, sometimes violent Bible study sessions. Many of them, like Mr. Evans, also worked on his investigations.

Mr. Anthony’s critics — there were many, and not just among the Robert Tiltons of the world — accused him of running a cult. In the early 2000s, several followers left Trinity, and one, Wendy J. Duncan, published a book detailing a series accusations, including that Mr. Anthony had insisted that she seek his approval to marry one of his lieutenants.

Mr. Evans denied that Trinity is a cult, but he admitted that Mr. Anthony’s personality, and theology, had not been for everyone.

“He had a confrontational style,” he said, “and that’s what rubbed some people the wrong way.” 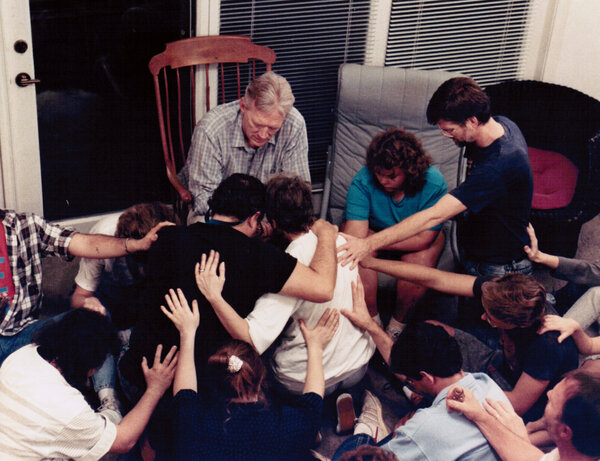 Ole (pronounced O-lee) Edward Anthony was born on Oct. 3, 1938, in Saint Peter, Minn., about 70 miles southwest of Minneapolis. He grew up in Wickenburg, Ariz., a town 60 miles northwest of Phoenix that once billed itself as the “dude ranch capital of the world.” His father, Rudolph Anthony, left his family soon after the move, and Ole and his sister, Sandra, were raised by their mother, Edna (Norell) Anthony, a nurse who ran a retirement home.

Mr. Anthony’s sister died in 2019. He had no immediate survivors.

His childhood, he said, was marked by drug abuse and crime, both petty and felonious — at one point he and a friend set fire to a 40-foot-tall wooden cross outside Wickenburg. He joined the Air Force in 1956 after being offered the choice of military service or prison.

Mr. Anthony was trained in electronics, and in 1958 he was sent to an island in the South Pacific, where he was supposed to watch a small nuclear test many miles away. But the explosion was much larger than expected, and the radiation left him with scores of knobby tumors throughout his body.

He left the military in 1959 and took a job with Teledyne, a defense contractor. In a 2004 profile in The New Yorker, he told the journalist Burkhard Bilger that he had continued his work for the Air Force, sneaking behind the iron and bamboo curtains to install long-range sensors to detect Chinese and Soviet nuclear tests, though a later investigation by The Dallas Observer, a weekly newspaper, called that claim into question.

Mr. Anthony moved to Dallas in 1962 and became involved in Republican politics, working on campaigns and, in 1968, narrowly losing a race for the State Legislature. He was, by his own account, living large, with a luxury high-rise apartment, a $70,000 annual salary (about $550,000 today) and a rotating series of girlfriends.

A lapsed Lutheran, Mr. Anthony had what he called his “Road to Damascus” moment on Jan. 17, 1972, when he heard a British missionary talk about self-denial — “death to self” — as the only way to God. He immediately gave it all up.

“I was an atheist one day and a sold-out believer the next,” he said in a 2013 interview.

The started the Trinity Foundation the next year, naming it not for the Christian doctrine but after the world’s first nuclear test.

“God vaporized my value system the way that bomb vaporized its target,” he told Mr. Bilger.

At first, Mr. Anthony tried to gather his flock among the Republicans and Rotarians of wealthy Dallas. But his abrasive style — he talked about his sex life in Bible study and was permanently barred from Pat Robertson’s “700 Club” TV show — turned off the well-to-do.

Mr. Anthony didn’t seem to mind. With no religious training, he was teaching himself theology, and he became obsessed with the austere mysticism and doctrinal fluidity of first-century Christianity. He incorporated Jewish practices into Trinity’s evolving creed: The group celebrated Passover and insisted on having a minyan (at least 10 people) for Bible study.

As word about Trinity got around, it began to attract disciples from the margins of Dallas society: addicts and ex-hippies, disaffected students and people who otherwise found themselves at a dead end — as well as the occasional curious blow in.

Among them was a writer and actor named John Bloom, who performs under the name Joe Bob Briggs. He and Mr. Anthony became drinking buddies, and Mr. Bloom joined Trinity.

In 1980, Mr. Anthony accompanied him on a trip to Milan, Italy, where Mr. Bloom was investigating a stolen-art ring for Texas Monthly. The deal went bad, Mr. Bloom wrote, and the two, along with an informant, fled to Beirut, Lebanon. After Mr. Bloom flew to Paris, the informant took Mr. Anthony hostage, at one point putting a gun to his head, until he was rescued by American agents.

Mr. Anthony took a token salary at Trinity. He covered his expenses with a small settlement he had received after an accident in 1979 in which he stepped on a live wire in the steam room at a gym. The injury seared nerves, leaving him dependent on pain medications and using a cane.

In 1988, one of his followers told him that he had gone broke after giving his last savings to Mr. Tilton, who had solicited donations on his nationally syndicated program, “Success-N-Life,” in exchange for prayers on their behalf.

Mr. Anthony and his followers decided to investigate. They rooted through the dumpsters behind Mr. Tilton’s bank, where they found prayer requests still in their envelopes — opened only to remove the cash.

Their findings — and Mr. Anthony — figured prominently in an episode of the ABC newsmagazine “Primetime Live” in November 1991. Mr. Tilton pushed back. In a televised response, he claimed to have prayed so hard on the letters that the ink had seeped into his brain, and he sued both ABC News and Mr. Anthony. But the suits were thrown out, congregants left en masse and Mr. Tilton’s ministry crumbled.

Not all of Trinity’s endeavors were so successful. In the late 1980s, Mr. Anthony started the Dallas Project, which proposed that homelessness could be eradicated if every church in America took in one or two people. He promoted the idea heavily, but only a few churches in Dallas participated.

In 1995, the foundation took out millions of dollars in bonds to buy 13 low-income apartment buildings in Oklahoma City. But the cost to run them was higher than anticipated, and Trinity defaulted in 2000.

In the mid-2000s, several ex-followers served as sources for a series of investigative articles about Trinity by The Dallas Observer. Among other practices, they described one called “the hot seat,” in which a member would sit in a chair and be pummeled by accusations and invectives hurled by the others.

The Observer also raised questions about whether Mr. Anthony had exaggerated his case against Mr. Tilton — who, in the intervening years, had rebuilt his ministry in Tulsa, Okla.

Trinity split up in 2010, with the investigative arm continuing as a nonprofit and the religious side reconstituting itself as the Community of Columbia.

Mr. Anthony never backed off his confrontational style, or his dogged pursuit of televangelists. As recently as last year he was tracking the flights of private jets owned by prominent TV preachers.

“There’s more fraud in the name of God than any other kind of fraud in the world,” he said in the 2013 interview. “That’s just heartbreaking.”

No injuries after passenger train hits debris on tracks in Debert, N.S.